Johnson-Su bioreactors have become all the rage on some regenerative farms. But what are they and how do you use them?

If first lockdown was all about building a firepit from spare discs, last autumn saw a surge in the construction of Johnson-Su bioreactors being showcased on social media. A Johnson-Su bioreactor is a method of creating fungal-rich compost, and was developed by Dr David Johnson, adjunct professor at California State University’s Center for Regenerative Agriculture and Resilient Systems, and his wife Hui-Chun Su. In his research looking at biological soil enhancements for the Institute of Sustainable Agriculture at New Mexico State University he found the ratio between fungi and bacteria in the soil is critical to a plant’s productivity in healthy agricultural systems. 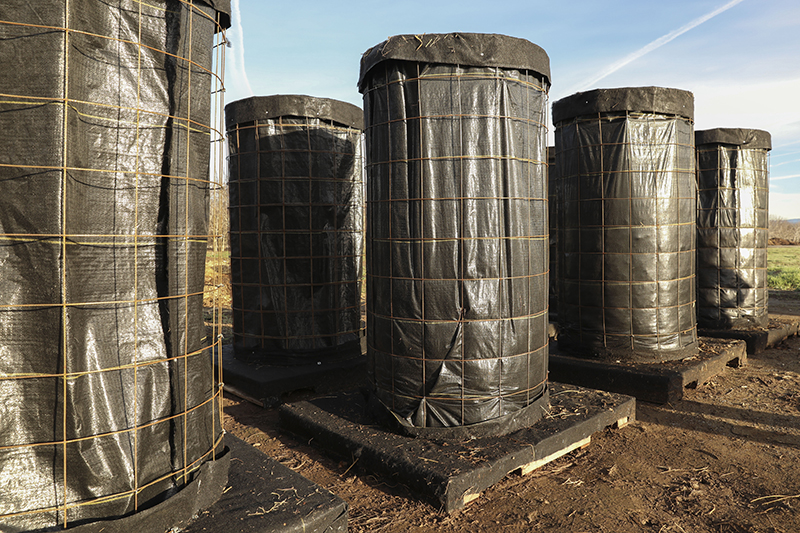 As ecosystems increase in their productivity from bare soil to forests, the balance changes from a bacterial-dominant to a fungal-dominant system, as well as going from low to high carbon content in soils, he explains. “Most agricultural systems are currently bacterial-dominant, low carbon and low production. Weeds grow very well in these systems, but their purpose is to begin to transition poor soils up this ladder of succession,” he says.But ideally agricultural soils need to be around 1:1 fungal:bacteria for arable crops and vegetables to do well. “In order to stay on that rung of the ladder, we do need some controlled disturbance.”

That disturbance can be created by grazing animals, which with their activity and dung, create a microbiological inoculation event that moves with the animals. Dr Johnson has tried to mimic that system on arable land. “Not everyone can have or want grazing animals in their system.” The result was the Johnson-Su bioreactor. “It produces a fungal-dominant and biologically diverse compost. The bioreactor mimics what happens to dung and organic matter on prairies – it’s approximately 70% moisture content, doesn’t require turning, shouldn’t freeze and is always aerobic.” Built using easily sourced, relatively cheap materials (see box), it’s placed on a pallet to allow good airflow from below, keeping the process aerobic, together with the six air columns created with pipes during the construction and filling phase. “The pipes are pulled out after 24 hours as the pile completely stabilises itself with newly developed fungal hyphae and actinomycetes.”

Filling takes three to four hours, and he recommends material is wet when it is added. He uses a plastic bath tray with a wheelbarrow tipped up so wet material can drain back into the bath for this process. First, he adds dry, if necessary chipped or chopped material into the water bath to soak it, and then with a fork transfers that to the wheelbarrow to drain, before moving it to the bioreactor via buckets. Once filled the compost can reach temperatures of 70C usually in the first week, depending on the material used to fill it, but after it returns below 27C, around 100 Red Wiggler composting worms are added.

“At that point they will survive. If you’ve done it right by the time you’ve finished it will be full of baby worms that have eaten everything that has been usable.” An irrigation system is used to make sure the compost is kept at around 70% moisture. In his hot environment he irrigates once a day for about a minute. “One way to judge if you are at 70% moisture is to squeeze it with your hand – you should just about be able to squeeze a drop of water out.” To completely make the compost takes a year, allowing the microbial diversity to increase significantly. Following Dr Johnson’s design produces around 300kg of finished product from 900kg of wet material.

In initial greenhouse trials he found the compost produced double the plant growth compared with any of eight other commercial composts, despite it being low in nitrogen, potassium and phosphorus, which are critical for growth. “So we thought OK, it’s organic matter. Organic matter is important, but that did not correlate well to plant growth either,” he says. However, he found the fungal:bacterial ratio was a strong predictor of plant growth, with the Johnson-Su compost being fungal dominant.

Further experiments examining how fungal to bacterial ratio affected plant partioning of carbon and nitrogen found only 3% of the energy the plant captured during photosynthesis went into the plant in a bacterial-dominant system compared with 56% in a fungal-dominant system. “In our agricultural systems we’re currently about 11% efficient, which suggests we should be able to increase productivity about five times to reach that 56%.” To test that he started small plot trials using the compost at low rates as a microbiological inoculant. On desert sand soils, the biologically enhanced agricultural management (BEAM) treatment increased productivity of winter cover crops by 4.6 times over four seasons, from just a single application in year one.

Similar results were then seen in cotton and chile field trials, with an increase of 0.24% soil carbon / year, and around 100% improvements in yields, before farm-scale maize trials in 2019 compared conventional maize with 256 units of N applied with two BEAM approaches – one with 2kg/ha of an extract of the compost injected into the furrow with no additional N applied and the other with just 15% of the N.

“In year one the BEAM + 15% nitrogen matched the productivity of the conventional approach, and was $121/acre more profitable, while the BEAM only strip suffered a 2% yield loss but was still $86/acre more profitable than the conventional approach.” While most of Dr Johnson’s trials have been carried out using an extract, a Belgian farmer, Gerard Dumont de Chassart used it as a seed dressing on radish, peas, millet, sorghum and alfalfa cover crop after creating a slurry again with a doubling of productivity in above ground biomass.

“The slurry should be about the consistency of pancake batter, at about 1L/ bag of seed. Plant it straight away. Planting it damp is much better, keeping the microbes living until you get them into the soil,” he says.

“The inoculant kick starts the system. In the first years you might need to inoculate each year, but I don’t think you have to do it forever – once inoculated, it’s the management after that – keeping a cover crop growing all the time, for example – that’s essential,” he concludes.

Member · From Lichfield
Direct Driller is a new farming magazine, designed by farmers for farmers to educate and inform the industry about direct drilling and no-till techniques, soil regeneration and soil conservation in arable and mixed farming situations.
Media
D