Will Chinese maize support feature for a consecutive season?

In the last twelve months, maize markets (Chicago - nearby) have undergone quite a change. From August Chicago maize futures (nearby) climbed 151% to briefly peak at the $7.70/bsl mark ($304.2/t) in May 2021. As we know Chinese purchases have supported the gains. But, if we look forward a couple months, are Chinese fundamentals different to a year ago?

As we approach global crop harvests, US maize futures (nearby) have fallen 28% from the May peak to yesterday. Ending stocks for the 2021/22 global maize crop is forecast to increase 4% year on year by the USDA owing to increased production.

China too is expecting a rise in maize production, namely a 12.0Mt increase according to Refinitiv, to 272.7Mt from USDA figures last season. Despite Chinese maize futures (Jan-22) easing back 10% from the May peak to yesterday, the contract is $167.13/t above CBOT Dec-21 maize futures.

High internal Chinese prices are the likely source of a 2.7% increase in planted area figures. The province of Jilin is forecast to produce 34.9Mt of maize this season with spot prices (Ex Works incoterm) currently at 2600 CNY ($401.7X/t). This is somewhat elevated against a theoretical spot import price of $350.87/t (US Gulf FOB $276.00/t + $74.87/t Freight from US Gulf to China).

The Chinese maize crop looks to be doing well. Vegetation densities (NDVI), derived from satellite imagery, in Heilongjiang and Jilin provinces are at record levels since monitoring began in 2001. These two provinces alone are forecast to produce 76.39Mt of maize. 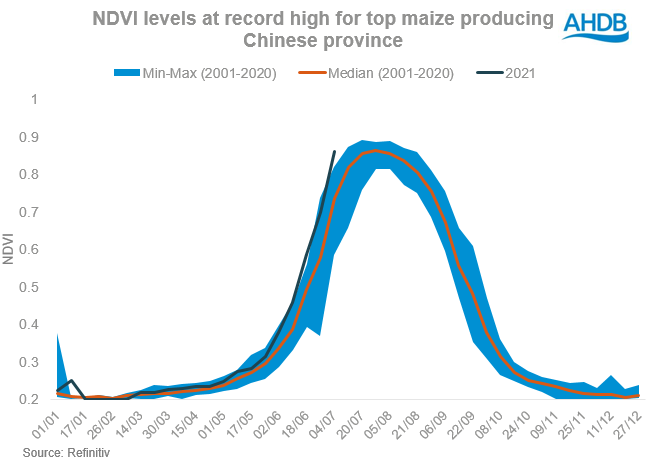 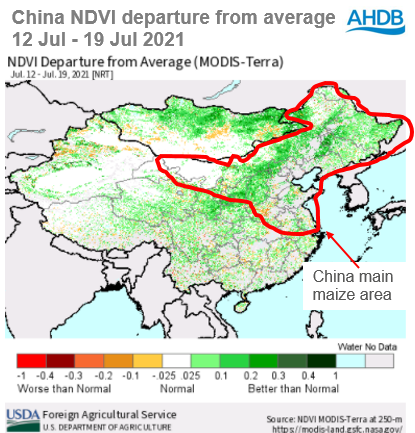 China has a hefty forward book of maize purchases penned in, at 10.74Mt of US origin maize for the next marketing year, beginning in September. However, bear in mind that these can be cancelled.

To put this into perspective, so far this marketing year (Sept 2020 – Aug 2021), US maize exports to China have totalled 18.14Mt, with a further 5.1Mt of outstanding trade to sail. As such, with a large forward export sales book already, it is perhaps unlikely that new, large forward sales will occur before the Chinese crop has been harvested. New export sales are a supporting factor for markets. The global export demand for maize markets will depend heavily on this Chinese maize crop, and as such so will price direction going forward.

Will Chinese maize support feature for a consecutive season?
Join the 3.6K people who subscribe to our Grain Market Daily publication here