Autumn Guide - Learning Lessons from the Past

THE IMPORTANCE OF MULTI-SITES

History clearly tells us that single-site fungicides used without the addition of a multi-site can quickly succumb to resistance evolution. Alternative multi-sites such as folpet can be used to manage resistance and extend the life of existing chemistry. 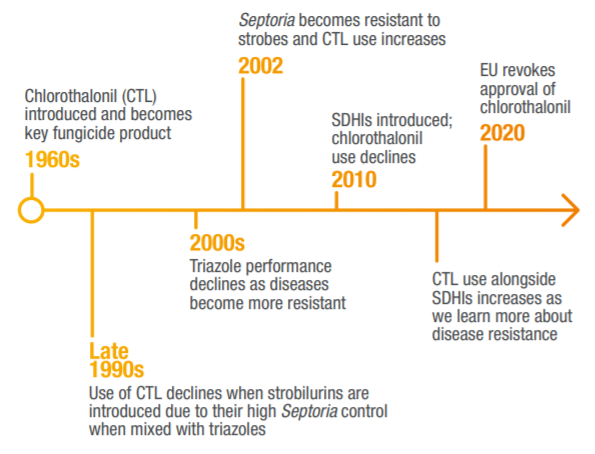 How do they work:

Mutli-sites target multiple paths of the fungus development, such as spore germination, cell division and energy production in mitochondria. Trials show that multi-sites improve disease control and can delay the development of resistance in other actives. H


WHAT ARE YOUR OPTIONS WITHOUT CHLOROTHALONIL?

BARLEY:
• Manage stress in the crop with good nutrition programmes
• Consider your variety and assess Ramularia pressure according to region and location
• Introduce multi-sites such as folpet into your spray programme

Yellow rust can be unpredictable and appear quickly, especially with continual evolution in races. As most varieties do not have seedling resistance, yellow rust can appear early in the season and should be considered in your disease management programme to prevent irreversible yield losses.

WHAT ARE YOUR OPTIONS?

• Following the loss of epoxiconazole, tebuconazole is now one of the few remaining triazoles which are highly effective against active yellow rust.
• If yellow rust is expected but not yet active, a strobilurin such as AMISTAR® will give good protection at T0.

• There are clear differences in SDHI activity on rust with Solatenol being the most effective. • ELATUS Era can be used in your spray programme at T1 to provide great control for yellow rust in winter wheat.

ACTIONS HOW YOU CAN REDUCE THE RISK OF YELLOW RUST

• Choose a resistant variety
• It’s critical to spray at T0 if active yellow rust is seen
• Use a rust active SDHI at T1 such as ELATUS Era
• Control volunteer cereals to prevent rust spreading
• Grow a mixture of varieties ALWAYS REMEMBER… WHEN YOU SEE IT, SPRAY IT!