We’ve hit the deep freeze here the last few days. Canadian slang for it’s really cold out. While it’s been blowing and snowing the first part of the week, today’s chores were down on a glorious, sunny morning at a chilly -33C. As you can see from the girls at their breakfast, they’re a bit frosty but everything sure is beautiful! 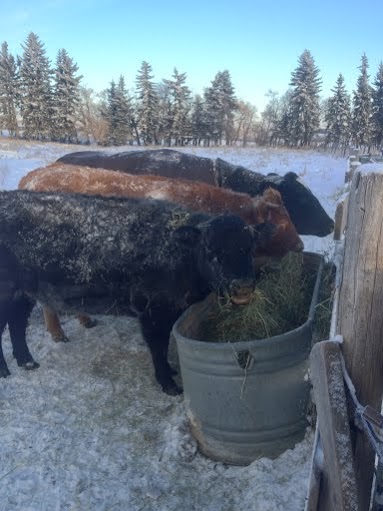 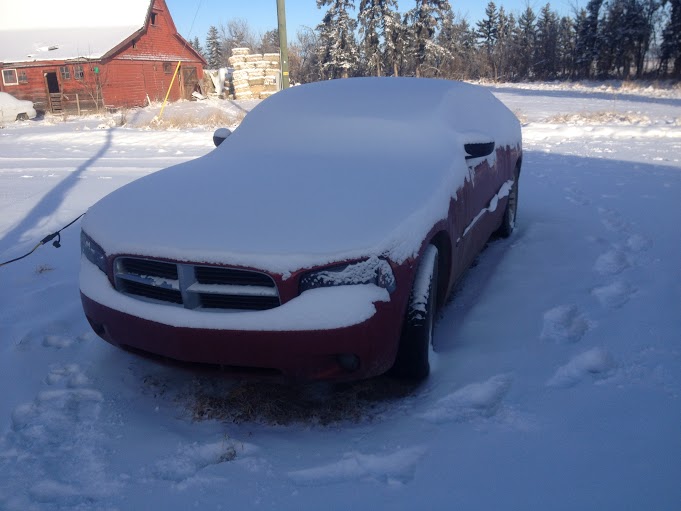 Life tends to go on as normal when we hit these extreme cold temperatures with a few variations of course. In day to day life the vehicles get plugged in - but then we plug them in as soon as it’s around -10C, just easier on the poor cold things. Being plugged in is simply in reference to the block heater in the engine being plugged in to power so that it can warm the engine allowing it to start easier and warm up quicker. All vehicles sold in Canada are equipped with this, even farm machinery which lately seems to be coming out with an extra block heater for the transmission and hydraulic fluid. To this end, pretty much anywhere you park in Canada comes equipped with it’s own power outlet. Parking spots for apartment buildings and many paid parking lots all have accessible outlets while the street and the middle of some generic parking lots may be a park at your own risk scenario. There were some issues a few years back when the Canadian dollar was so high and lots of people chose to buy vehicles from America and save sometimes large amounts of money. However when winter rolled around many discovered that it’s not standard in American vehicles to come supplied with block heaters…. That required a fix in CAD. There’s something nice and cozy about your car being blanketed in snow and plugged in to stay warm though, it’s like the equivalent of tucking it in for bed. 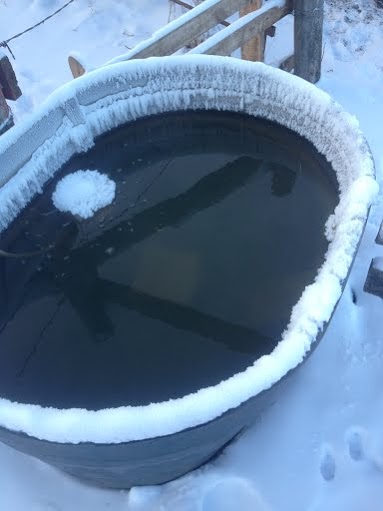 On the livestock side of things everything is done the same but with some things it’s done more. The chickens get nice hot water to help warm them up and to keep it from freezing longer and all their extra high energy food is topped up - good barley and cat food as an added treat. The horse gets extra flakes of hay to munch on which she usually just takes advantage of by spreading it around the pasture. Similarly the cows get their feed increased.


The average, well conditioned cow requires 3% of her body weight in dry matter per day to maintain her condition. This doesn’t change on average winter days however in extreme cold such as today they will require more energy and dry matter intake. Lactating cows especially need 40-60% more energy than during gestation which is a major reason many cattlemen in Canada chose to wean calves in the fall. It’s incredibly easy to run a lactating cow down in such temperatures when their body requires so much more feed and energy. The generalized rule here is that for every 10 degrees below -20C at mid day, beef cows will require an additional 4-6 Mcals of digestible energy. Barley contains 1.5 Mcals per pound so 3 - 4 lbs of added barley a day can relieve the stress of the temperature. However if it’s even colder and the animals are unused to a grain ration than anything more than 8 lbs of added grain can lead to rumen upset. In regards to dry matter an animal may increase their intake by up to 30% in this cold. So you’re looking at 10 - 15 lbs added dry matter for an ~1300lb cow.


There are, of course, little things to be done that help cattle stay warm in these frigid temps. As long as the animals remain dry they can collect a snow layer on top of their hair which will add an insulating value. However wet and muddy hair reduces insulation so it’s important that they have someplace dry to lay down so that they don’t have an entire side wet and exposed when they stand up. Windbreaks, shelters, the additional bedding and even bush can help keep them dry and warm but it’s never recommended here to force them indoors during storms. Barring good ventilation the longer animals are grouped together inside the more likely they are to get wet from things like condensation and close contact. Also, while many cattle take the lazy cows way out and eat snow during the winter it is still important to have water available to them, especially during such cold times. It is an essential ingredient in their digestion which helps keep their furnace of a stomach going to keep them warm. One more trick with their stomach, is to feed cattle in the late afternoon or early evening. The digestion process and fermentation that takes place with it provide maximum heat for cattle 4 to 6 hours after they’ve consumed the feed. This means feeding them later in the day puts them at peak digestive heating during the coldest part of the night. Something they’d greatly appreciate! 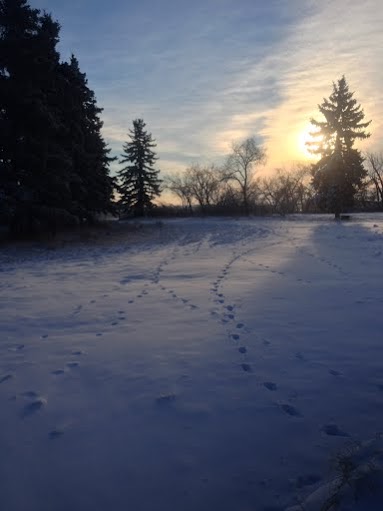 I’m sure there’s many other things that are just taken for granted here every day that help us stay warm and functioning that other countries just don’t have. Maybe things like double and triple paned windows, winter and all season tires and for sure the approach to water. Water lines here are buried at least 8 feet in the ground when they’re installed to prevent them from freezing. All pumps that send water to the surface will drain back to the 8 foot mark, or even to the well at times, to prevent the pipes freezing near or at the surface, unless it’s a set up with heating supplied at the surface in which case the pumps will keep pressure at a constant level to keep water to the top. All livestock waterers require a heater of some sort to keep them from freezing but there are different methods available. I’m sure many of you will recall my posts on the tribulations of a waterer where the heating element quits causing the entire thing to freeze - that’s always a fun chore to fix. At home I have a different set up with an old school pump jack to get water from the well which then drains back to the well after use so I have no worries of the pipes freezing. As for the waterer it’s simply a 100 gal tank but yes, that can - and has - frozen solid before. Instead of using an element though, I’ve chosen a simpler de-icer to keep the water open for the animals. Elements tend to sit on or near the bottom of the tank and heat all of the water to the same temperature. Heating 100 gal of water to above 0 can increase a persons electricity bill a bit so the de - icer that only keeps the top above freezing works just fine for me. The animals drinking the water level down keeps the heater at a different level constantly and prevents freezing from the sides or bottom. Plus if it snows enough I can always pile it up around the tank which makes a great insulating wall! I even have a fish that resides in my tank to clean up any grungies and larvae in the summer. It’s quite fond of hanging out under the de-icer in this weather.

@Blaithin is a TFF member from Canada and kindly submits blogs to TFF News on an adhoc basis
You must log in or register to reply here.
Share:
Facebook Twitter Tumblr WhatsApp Email Link

LEAF (Linking Environment And Farming) is offering 60 farmers the chance to participate in pre-pilot trials looking at aspects of the Environmental Land Management Scheme (ELMS), that will pay Land Managers for delivering public goods under the 25 Year Environment Plan.

LEAF, which has nearly 30 years of experience in the development and promotion of sustainable farming...
News
Continue…
Top