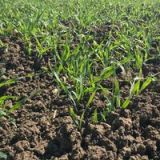 The company says skipping a contact herbicide can be tempting, but trials consistently show the best results for both weed control and boosting yield come as a result of a robust pre-emergence programme with an early follow-up spray.

Hitting weeds while they are small is also more effective and prevents competitive growth among the crop, and using a residual followed by a post-emergence herbicide with a different mode of action is an important part of a good resistance management strategy.

Corteva’s Cereal Herbicide Product Manager, Alister McRobbie, says shorter days, fluctuating temperatures and frequent rain events can make well-timed applications in the autumn difficult, but says the results of a good autumn campaign will be seen in the spring.

He said: “A residual will either take out or heavily restrict the growth of some early-emerging grassweeds which then leaves less work for the contact spray to do later on, meaning better overall control and a reduced risk of resistance building.”

Corteva’s Broadway® Star has been a mainstay of autumn and spring grassweed programmes for many years, delivering 99% control of sterile brome when used following an application of pendimethalin plus flufenacet.

Similar results have been seen for ryegrass control when prosulfocarb is followed by Broadway Star.

Alister said: “Many farmers will leave weed control until the spring, but providing sprayers can travel the soil temperature and the weed size are perfect for Broadway Star to do its work.”

He advocates the same message for broadleaf weed control.

It can be added to residual herbicides such as pendimethalin and flufenacet.

Zypar contains ArylexTM active which means it will work in cold and fluctuating temperatures, unlike other broadleaf herbicide chemistry.

Alister said: “Farmers and agronomists have seen over a number of years that an autumn application of Zypar plus a picolinafen based product such as Picona controls meadow grass and broadleaf weeds in a single pass.”