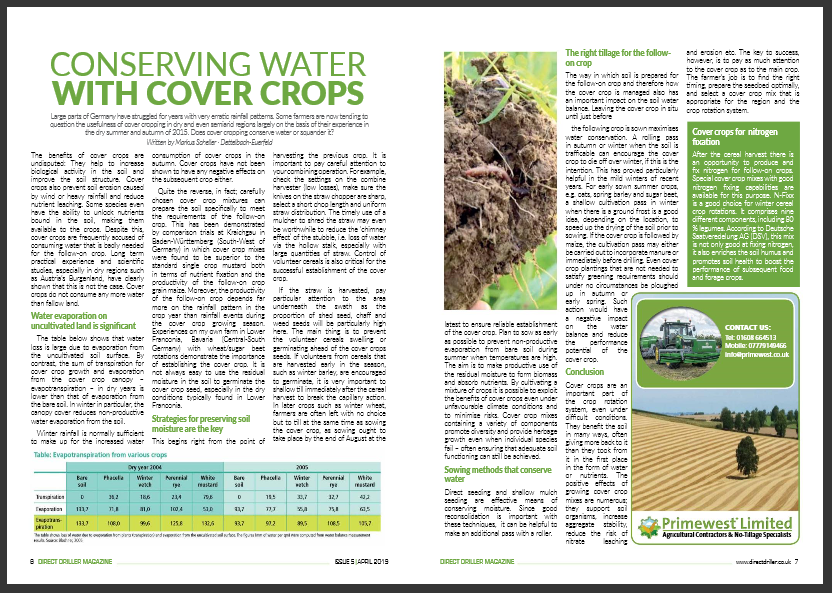 Large parts of Germany have struggled for years with very erratic rainfall patterns. Some farmers are now tending to question the usefulness of cover cropping in dry and even semiarid regions largely on the basis of their experience in the dry summer and autumn of 2015. Does cover cropping conserve water or squander it?

The benefits of cover crops are undisputed: They help to increase biological activity in the soil and improve the soil structure. Cover crops also prevent soil erosion caused by wind or heavy rainfall and reduce nutrient leaching. Some species even have the ability to unlock nutrients bound in the soil, making them available to the crops. Despite this, cover crops are frequently accused of consuming water that is badly needed for the follow-on crop. Long term practical experience and scientific studies, especially in dry regions such as Austria‘s Burgenland, have clearly shown that this is not the case. Cover crops do not consume any more water than fallow land.

Experiences on my own farm in Lower Franconia, Bavaria (Central-South Germany) with wheat/sugar beet rotations demonstrate the importance of establishing the cover crop. It is not always easy to use the residual moisture in the soil to germinate the cover crop seed, especially in the dry conditions typically found in Lower Franconia.

Strategies for preserving soil moisture are the key

This begins right from the point of harvesting the previous crop. It is important to pay careful attention to your combining operation. For example, check the settings on the combine harvester (low losses), make sure the knives on the straw chopper are sharp, select a short chop length and uniform straw distribution. The timely use of a mulcher to shred the straw may even be worthwhile to reduce the ‘chimney effect’ of the stubble, i.e. loss of water via the hollow stalk, especially with large quantities of straw. Control of volunteer cereals is also critical for the successful establishment of the cover crop.

If the straw is harvested, pay particular attention to the area underneath the swath as the proportion of shed seed, chaff and weed seeds will be particularly high here. The main thing is to prevent the volunteer cereals swelling or germinating ahead of the cover crops seeds. If volunteers from cereals that are harvested early in the season, such as winter barley, are encouraged to germinate, it is very important to shallow till immediately after the cereal harvest to break the capillary action. In later crops such as winter wheat, farmers are often left with no choice but to till at the same time as sowing the cover crop, as sowing ought to take place by the end of August at the latest to ensure reliable establishment of the cover crop.

Plan to sow as early as possible to prevent non-productive evaporation from bare soil during summer when temperatures are high. The aim is to make productive use of the residual moisture to form biomass and absorb nutrients. By cultivating a mixture of crops it is possible to exploit the benefits of cover crops even under unfavourable climate conditions and to minimise risks. Cover crop mixes containing a variety of components promote diversity and provide herbage growth even when individual species fail – often ensuring that adequate soil functioning can still be achieved.

Direct seeding and shallow mulch seeding are effective means of conserving moisture. Since good reconsolidation is important with these techniques, it can be helpful to make an additional pass with a roller. The right tillage for the followon crop The way in which soil is prepared for the follow-on crop and therefore how the cover crop is managed also has an important impact on the soil water balance. Leaving the cover crop in situ until just before the following crop is sown maximises water conservation. A rolling pass in autumn or winter when the soil is trafficable can encourage the cover crop to die off over winter, if this is the intention. 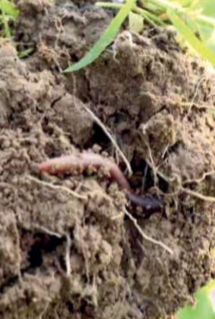 This has proved particularly helpful in the mild winters of recent years. For early sown summer crops, e.g. oats, spring barley and sugar beet, a shallow cultivation pass in winter when there is a ground frost is a good idea, depending on the location, to speed up the drying of the soil prior to sowing. If the cover crop is followed by maize, the cultivation pass may either be carried out to incorporate manure or immediately before drilling. Even cover crop plantings that are not needed to satisfy greening requirements should under no circumstances be ploughed up in autumn or early spring. Such action would have a negative impact on the water balance and reduce the performance potential of the cover crop.

Cover crops are an important part of the crop rotation system, even under difficult conditions. They benefit the soil in many ways, often giving more back to it than they took from it in the first place in the form of water or nutrients. The positive effects of growing cover crop mixes are numerous; they support soil organisms, increase aggregate stability, reduce the risk of nitrate leaching and erosion etc.

The key to success, however, is to pay as much attention to the cover crop as to the main crop. The farmer‘s job is to find the right timing, prepare the seedbed optimally, and select a cover crop mix that is appropriate for the region and the crop rotation system.

After the cereal harvest there is an opportunity to produce and fix nitrogen for follow-on crops. Special cover crop mixes with good nitrogen fixing capabilities are available for this purpose. N-Fixx is a good choice for winter cereal crop rotations. It comprises nine different components, including 80 % legumes. According to Deutsche Saatveredelung AG (DSV), this mix is not only good at fixing nitrogen, it also enriches the soil humus and promotes soil health to boost the performance of subsequent food and forage crops.

Your chance to help design ELMS