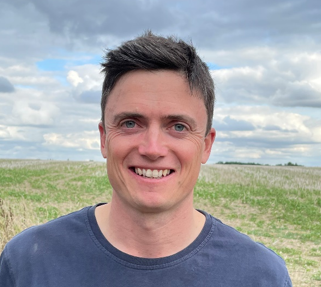 When I started farming there were two choices: conventional and organic. We were conventional. Organic just seemed out of the question, too bigger a leap on the heavy land we farm without livestock. I found neither of these provided me with that sense of fulfilment. I have always been an advocate for planting hedges, introducing trees, awareness of catchments and pollution – all things connected to working with the natural environment. However, I wanted to use (and appreciated) pesticides, when used in the right place at the right time. Farming in a way which delivers other benefits, not solely economic returns, has been what I was looking for.

There is nothing exceptional about our farm. We are a 327ha arable farm in west Cambridgeshire growing combinable crops on clay. There is, however, something remarkable going on underneath our feet. Every moment of every day, flora and fauna are interacting in ways too numerous for us to comprehend, for the benefit of our farm. And to encourage this, I have to do things differently.

I instinctively knew Regen Ag was an opportunity I wanted to grasp, from those first few ‘alternative’ talks and working demonstrations I had seen during early 2010’s. I knew this because I began to grasp the concept that soil functions by itself, in cycles. This was revolutionary as I had come from a traditional, heavy cultivation regime, with little thought for the soil. A traditional focus is on the surface, how things look from above. Regen Ag presented an alternative: looking at the whole system. In 2016 I started to farm in a way that works with the natural systems, and attempted to use nature to help address some of the problems ‘bag and can’ farming had created. Turns out my first attempt was a failure as whilst I had the enthusiasm, I didn’t prioritise information, in this case, about soil structure. And so on to the next year, this time armed with a soil consultant. We are now 5 years into a graduated transition, and the results, both anecdotal and empirical give me great confidence that we are on a better path. What is more, the fun has come back to farming.

We run a 6 year rotation including W wheat, S barley, peas, oilseed rape, linseed and oats. We strive to grow multi species catch and cover crops, assuming we have a minimum 5-week gap between cash crops. I dig soil pits to check for problems during the summer and run a no-till establishment policy, with some exceptions based on soil structure data.

Our soil is Hanslope and Evesham series clay – 40% Clay, 37% Silt, 23% Sand. Although it is heavy soil, it has a high calcium content and has adapted to direct drilling better that I could have ever expected. The way in which it self-structures is remarkable, trafficability has improved and we do not get those sunken wheelings from harvest traffic during wet summers.

One big win for us as a ‘smaller’ farmer is to keep axial weights down. Regenerative Agriculture does not require much horsepower, we have been able to employ a 6t 150hp tractor for many operations and an 8ton 200hp tractor for crimper rolling / drilling. Lighter axial loads mean you are less likely to cause compaction, that leads to patchy crop establishment, weeds and problems down the line. 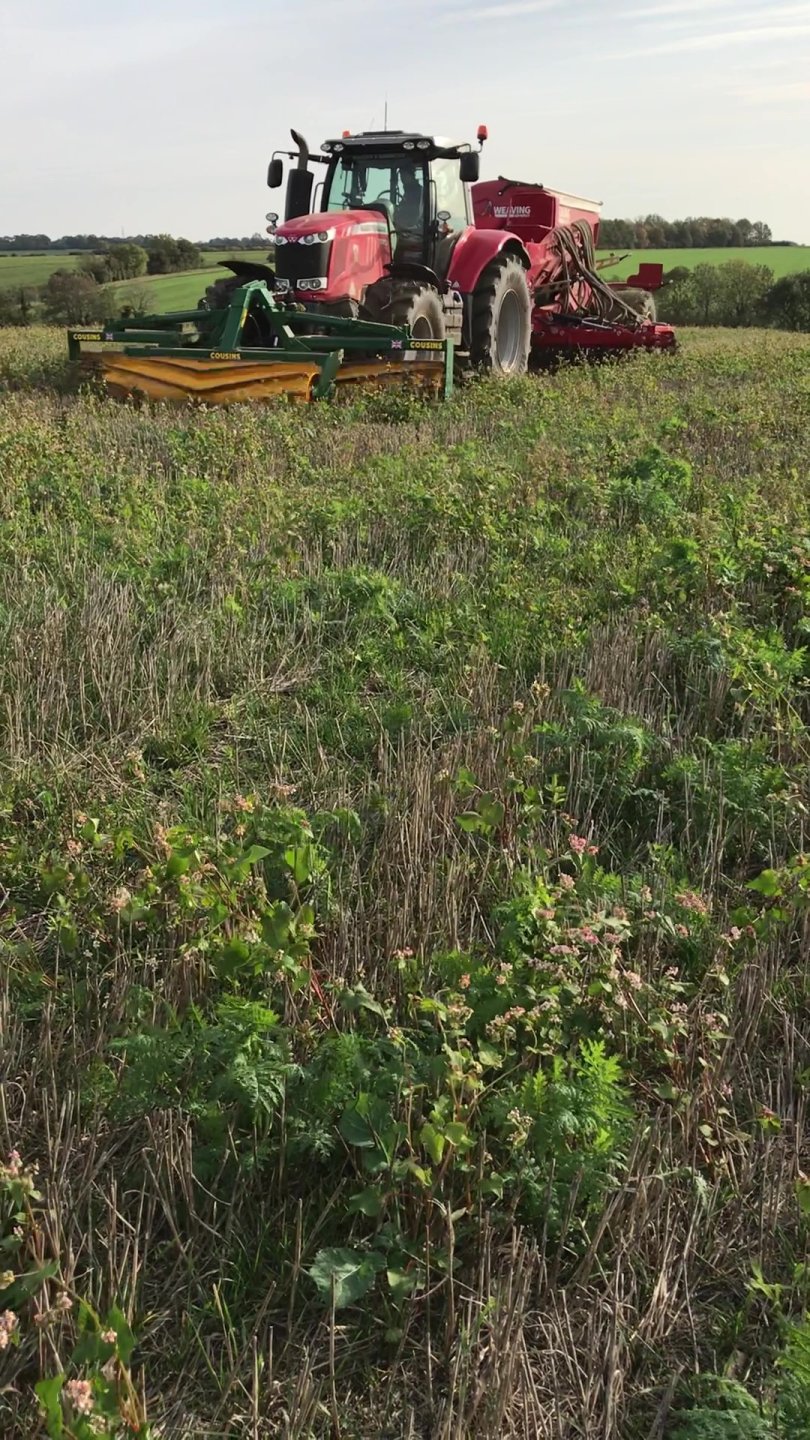 Residue management has been an area that we have grappled with. It took a while to understand that to establish a cashcrop in high residue situations, baling the straw has benefits. I have learnt to be pragmatic – you sometimes break one rule in order to achieve a successful cropping outcome. Ultimately, I hope that our worm populations and shredders will continue to build to a point where high C:N ration crop residue is pulled down and consumed, but we am not quite there yet. We have a disc drill and I am aware that hair-pinning will reduce my establishment % and may lead to residual herbicide washdown and damage.

In autumn 2019 I found direct drilling 2nd wheat seed into wheat stubble with cropped straw challenging. In some fields, the aggregation and structure was not yet there, meaning the moisture sat in the top 3 inches, causing smearing, compaction and anaerobic conditions. I saw blue mould and slugs attack the seed, leading to a stand of 112plant/m2 in February. The decision was made to keep the crop, and that year (2020) the direct drilled 2nd wheats only yielded 6.4t/ha. This decision was won over by the lack of weeds present, a great benefit of direct drilling and using a low disturbance opener.

Conversely, during spring 2021, spring oats establishment benefitted from chopped straw on the surface, along with a 5 way cover crop that was grazed by an over winter flock of ewe lambs. The straw acted like a mulch and prevented drying out and the opening of the slot during the dry April, just enough to allow germination, and the roots to find moisture. These milling oats went on to yield 6.0t/ha, 52kg/hl specific weight. 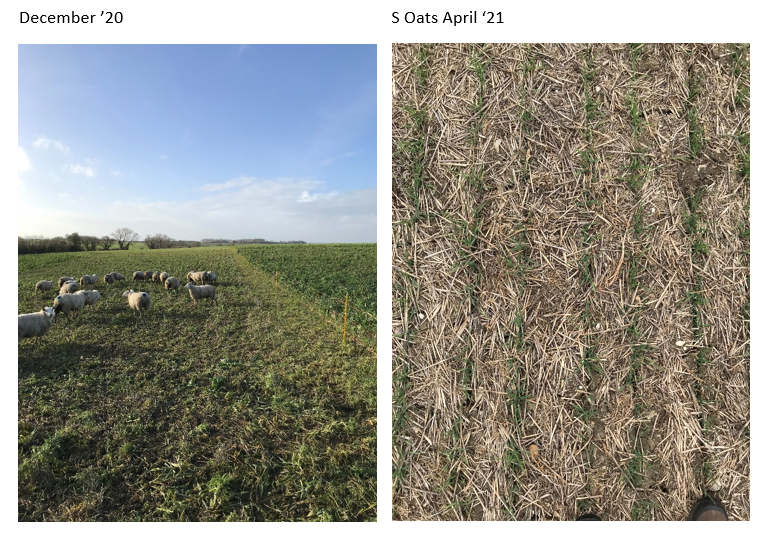 I have found that in this transition phase, mole draining and ditch maintenance has been key to our progression. A good mole may last for 10 years, and I hope that in time we may come to rely on mole draining less as our natural soil aggregation continues to improve.

Our first attempt at intercropping involved a crop of spring barley (50% seed rate) and peas (at 70% seed rate) in the same rows. The purpose of this was to try and address one of the 5 principles of Regen Ag – try to achieve diversity, to the benefit of soil microbes. This 5ha trial started well, but ended with the barley outcompeting the peas at GS39, coming to a 5.4t/ha spring barley yield and virtually peas. This was not a complete failure as it achieved this yield on near zero N to the crop. 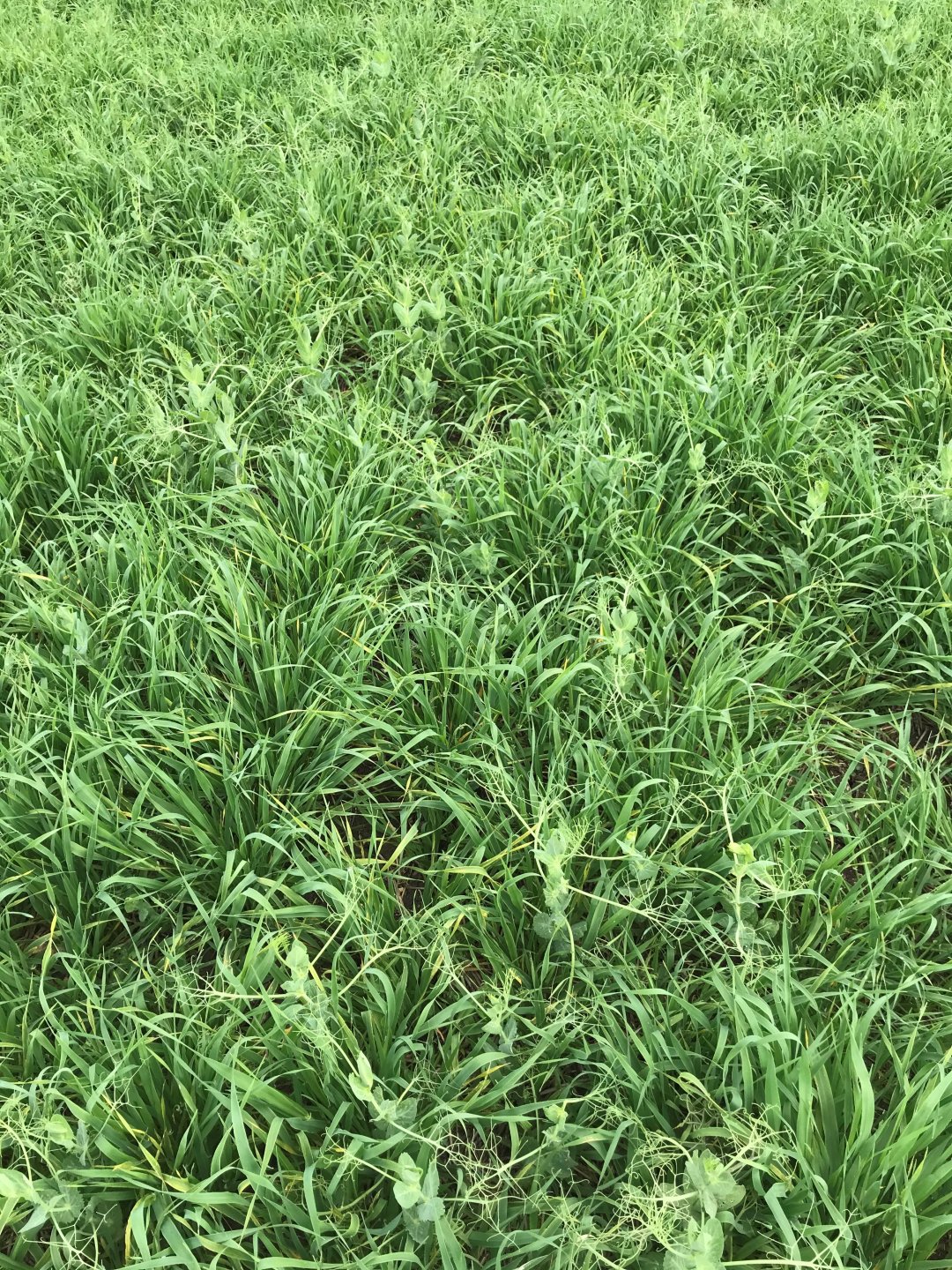 Artificial nitrogen fertiliser is an area we are trying to reduce, and rates for all crops are down 15% over 4 years. I have found this needs to be done carefully, as yields can be affected if done too fast or without a holistic view. I hope to partially move to foliar fertilisers to reduce this further in the short term, and who knows where intercropping can take us in the long term.

The adoption of this new way of farming has meant re-learning our trade and being open to new ideas. There have certainly been risks and pitfalls associated with the adoption of Regen Ag for us, but by taking a chance and managing the risks as best you can, so far the outcomes have been well worth it.
Click to expand...