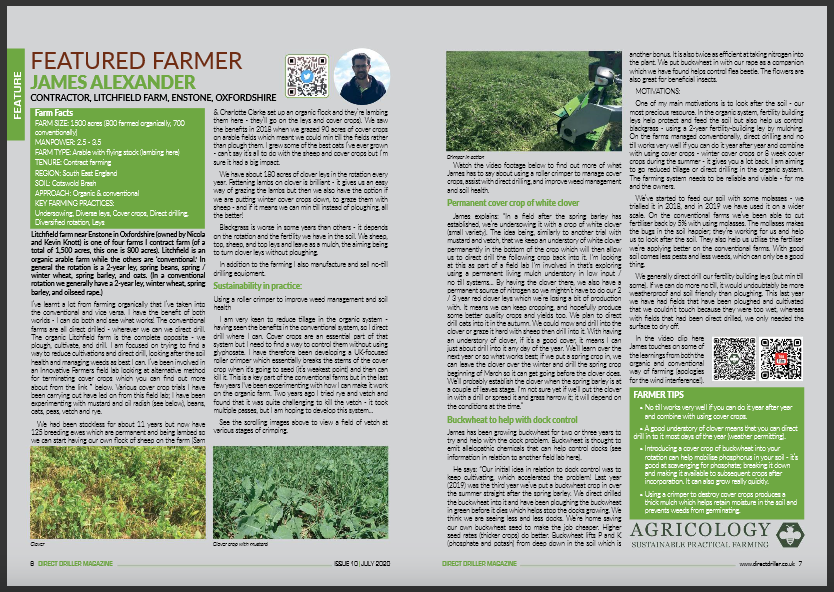 Litchfield farm near Enstone in Oxfordshire (owned by Nicola and Kevin Knott) is one of four farms I contract farm (of a total of 1,500 acres, this one is 800 acres). Litchfield is an organic arable farm while the others are ‘conventional.’ In general the rotation is a 2-year ley, spring beans, spring / winter wheat, spring barley, and oats. (In a conventional rotation we generally have a 2-year ley, winter wheat, spring barley, and oilseed rape.)

I’ve learnt a lot from farming organically that I’ve taken into the conventional and vice versa. I have the benefit of both worlds - I can do both and see what works! The conventional farms are all direct drilled - wherever we can we direct drill. The organic Litchfield farm is the complete opposite - we plough, cultivate, and drill. I am focused on trying to find a way to reduce cultivations and direct drill, looking after the soil health and managing weeds as best I can. I’ve been involved in an Innovative Farmers field lab looking at alternative method for terminating cover crops which you can find out more about from the link * below. Various cover crop trials I have been carrying out have led on from this field lab; I have been experimenting with mustard and oil radish (see below), beans, oats, peas, vetch and rye.

We had been stockless for about 11 years but now have 125 breeding ewes which are permanent and being lambed so we can start having our own flock of sheep on the farm (Sam & Charlotte Clarke set up an organic flock and they’re lambing them here - they’ll go on the leys and cover crops). We saw the benefits in 2018 when we grazed 90 acres of cover crops on arable fields which meant we could min till the fields rather than plough them. I grew some of the best oats I’ve ever grown - can’t say it’s all to do with the sheep and cover crops but I’m sure it had a big impact.

We have about 180 acres of clover leys in the rotation every year. Fattening lambs on clover is brilliant - it gives us an easy way of grazing the lambs but then we also have the option if we are putting winter cover crops down, to graze them with sheep - and if it means we can min till instead of ploughing, all the better! Blackgrass is worse in some years than others - it depends on the rotation and the fertility we have in the soil. We sheep, top, sheep, and top leys and leave as a mulch, the aiming being to turn clover leys without ploughing. 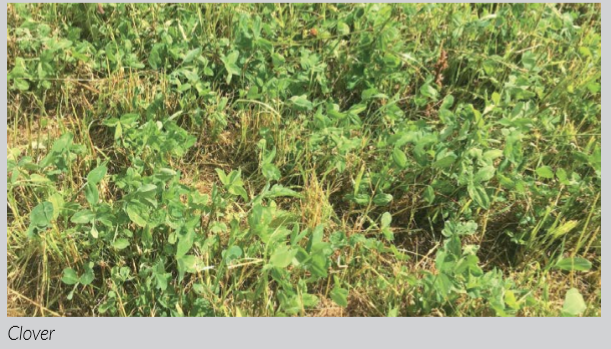 In addition to the farming I also manufacture and sell no-till drilling equipment.

Using a roller crimper to improve weed management and soil health I am very keen to reduce tillage in the organic system - having seen the benefits in the conventional system, so I direct drill where I can. Cover crops are an essential part of that system but I need to find a way to control them without using glyphosate. I have therefore been developing a UK-focused roller crimper which essentially breaks the stems of the cover crop when it's going to seed (it’s weakest point) and then can kill it. This is a key part of the conventional farms but in the last few years I've been experimenting with how I can make it work on the organic farm.

Two years ago I tried rye and vetch and found that it was quite challenging to kill the vetch - it took multiple passes, but I am hoping to develop this system... See the scrolling images above to view a field of vetch at various stages of crimping. 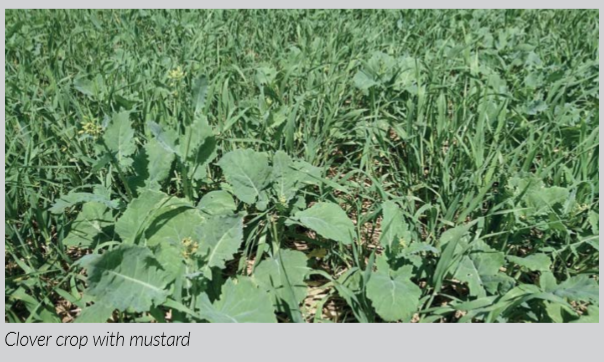 Watch the video footage below to find out more of what James has to say about using a roller crimper to manage cover crops, assist with direct drilling, and improve weed management and soil health.

James explains: “In a field after the spring barley has established, we’re undersowing it with a crop of white clover (small variety). The idea being, similarly to another trial with mustard and vetch, that we keep an understory of white clover permanently in the bottom of the crop which will then allow us to direct drill the following crop back into it. I'm looking at this as part of a field lab I'm involved in that's exploring using a permanent living mulch understory in low input / no till systems... By having the clover there, we also have a permanent source of nitrogen so we mightn’t have to do our 2 / 3 year red clover leys which we’re losing a bit of production with. It means we can keep cropping, and hopefully produce some better quality crops and yields too.

We plan to direct drill oats into it in the autumn. We could mow and drill into the clover or graze it hard with sheep then drill into it. With having an understory of clover, if it’s a good cover, it means I can just about drill into it any day of the year. We’ll learn over the next year or so what works best; if we put a spring crop in, we can leave the clover over the winter and drill the spring crop beginning of March so it can get going before the clover does. We’ll probably establish the clover when the spring barley is at a couple of leaves stage. I'm not sure yet if we'll put the clover in with a drill or spread it and grass harrow it; it will depend on the conditions at the time.”


Buckwheat to help with dock control

James has been growing buckwheat for two or three years to try and help with the dock problem. Buckwheat is thought to emit allelopathic chemicals that can help control docks (see information in relation to another field lab here). He says: “Our initial idea in relation to dock control was to keep cultivating, which accelerated the problem! Last year (2019) was the third year we’ve put a buckwheat crop in over the summer straight after the spring barley. We direct drilled the buckwheat into it and have been ploughing the buckwheat in green before it dies which helps stop the docks growing.

We think we are seeing less and less docks. We’re home saving our own buckwheat seed to make the job cheaper. Higher seed rates (thicker crops) do better. Buckwheat lifts P and K (phosphate and potash) from deep down in the soil which is another bonus. It is also twice as efficient at taking nitrogen into the plant. We put buckwheat in with our rape as a companion which we have found helps control flea beetle. The flowers are also great for beneficial insects.

One of my main motivations is to look after the soil - our most precious resource. In the organic system, fertility building leys help protect and feed the soil but also help us control blackgrass - using a 2-year fertility-building ley by mulching. On the farms managed conventionally, direct drilling and no till works very well if you can do it year after year and combine with using cover crops - winter cover crops or 8 week cover crops during the summer - it gives you a lot back. I am aiming to go reduced tillage or direct drilling in the organic system. The farming system needs to be reliable and viable - for me and the owners. We’ve started to feed our soil with some molasses - we trialled it in 2018, and in 2019 we have used it on a wider scale. 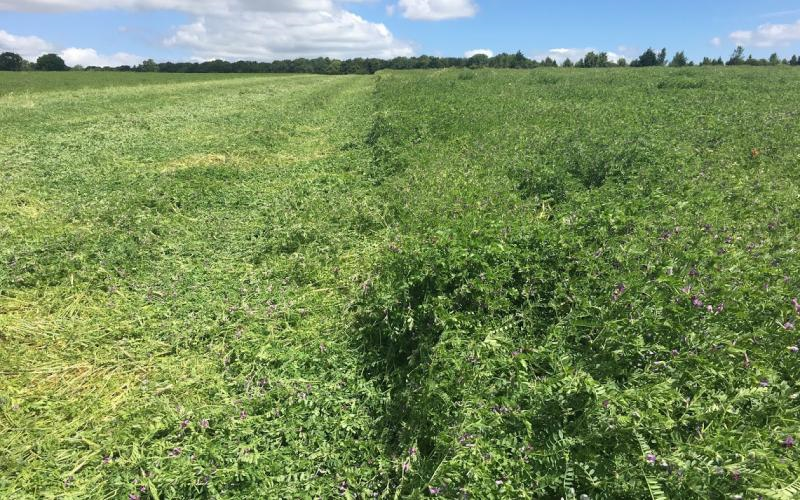 On the conventional farms we’ve been able to cut fertiliser back by 5% with using molasses. The mollases makes the bugs in the soil happier; they’re working for us and help us to look after the soil. They also help us utilise the fertiliser we’re applying better on the conventional farms. With good soil comes less pests and less weeds, which can only be a good thing. We generally direct drill our fertility building leys (but min till some). If we can do more no till, it would undoubtably be more weatherproof and soil friendly than ploughing. This last year we have had fields that have been ploughed and cultivated that we couldn’t touch because they were too wet, whereas with fields that had been direct drilled, we only needed the surface to dry off. In the video clip here James touches on some of the learnings from both the organic and conventional way of farming (apologies for the wind interference!).


FARMER TIPS
• No till works very well if you can do it year after year and combine with using cover crops.
• A good understory of clover means that you can direct drill in to it most days of the year (weather permitting).
• Introducing a cover crop of buckwheat into your rotation can help mobilise phosphorus in your soil - it’s good at scavenging for phosphate; breaking it down and making it available to subsequent crops after incorporation. It can also grow really quickly.
• Using a crimper to destroy cover crops produces a thick mulch which helps retain moisture in the soil and prevents weeds from germinating.