Combination drilling is still largely done with a power harrow and air drill. This combination replaced a Kuhn-Vicon air drill single pass combination, because Joe Lancake,who built it in 1996, wanted something less heavy on the tractor linkage which handled stones better.

Joe did a considerable amount of work to the cultivator, removing the Dutch harrow centre section and replacing it with a third row of spring tines. At the front he added a levelling bar, made from 3in angle and mounted on springs, and there's another levelling bar behind the tines and in front of the home made crumbler. The changes have improved the performance of the Multi-Harrow, which never quite achieved the tilth needed for a single pass. The action of the levellers, tines and crumbler means that this is achieved more often than not on the Cumbria farm.

The drill detaches with three pins if the cultivator is needed on its own.

Removing the whole machine from the tractor 3-pt reduces the size of the tractor in front, and he has used it with an MF399 though normally it gets towed by something bigger. With the weight distributed between the bogie wheels and the tractor lower links, compaction on headlands is reduced. 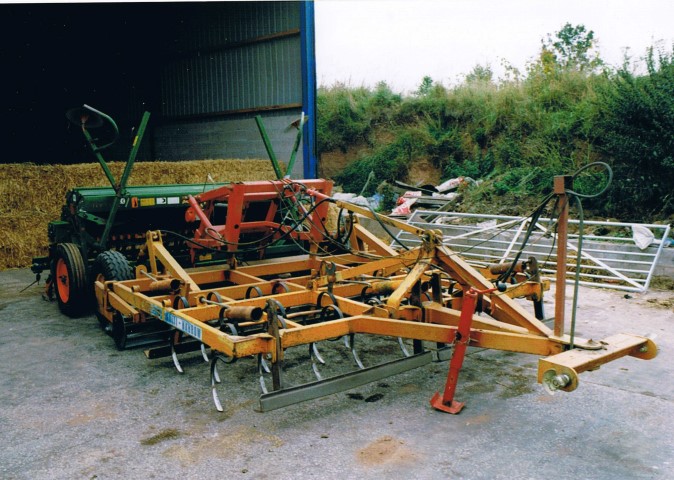 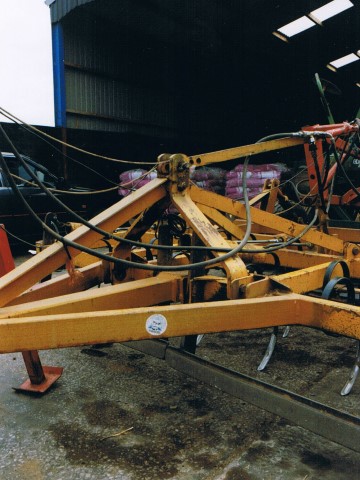 This tine drill doesn't need a large tractor, as the weight is carried on the back bogie

If you don't already subscribe to PFI, then you can Subscribe here for £16.50 a year. However, if you have a specific problem and you wonder if this has already been covered in PFI then you can read a list of all the project covered over the past 20 years in our Index document.

And finally if you have a project you have done, that you would like featured in PFI, then please email Mike Donovan at editor@farmideas.co.uk

Interesting a spring tine cultivator would handle stones better than a power harrow. In my experience tines just rip up stones.
W

I don't know exactly where Joe has a farm , he used to manage one then went to sell minerals etc last I heard but where he used to be was in a much more stone free area.
You never see tined machines working in Cumbria as a rule, used to be when there were loads of men on farms the boss would drag harrow a field, the lads would pick the stones then he would harrow it again and hey presto, back to square one.

Chae1 said:
Interesting a spring tine cultivator would handle stones better than a power harrow. In my experience tines just rip up stones.
Click to expand...

I use them on stoney land, i llike that fact they pull up the stones i like removing the stones as they get less as the years wear on, if you keep burying them rolloing em in they there for ever.

Don't find we get any less here. Just keep coming up. Take them off every year.

Chae1 said:
Don't find we get any less here. Just keep coming up. Take them off every year.
Click to expand...

They get less here defiantly i have 30 acre fields i have removed 1000 tons and the next year plough and drill same time. i have used a 4m gm we bought 28 years ago for 200 quid
You must log in or register to reply here.
Share:
Facebook Twitter Tumblr WhatsApp Email Link

A lot on the plate for George Eustice

The Tenant Farmers Association (TFA) has welcomed the promotion of George Eustice to become the new DEFRA Secretary of State.

TFA chief executive, George Dunn, said “It’s good to see that the Prime Minister has appointed someone who actually wanted the role rather than it being used either as a stepping-stone to something else or a demotion as has previously been the...
News
Continue…
Top