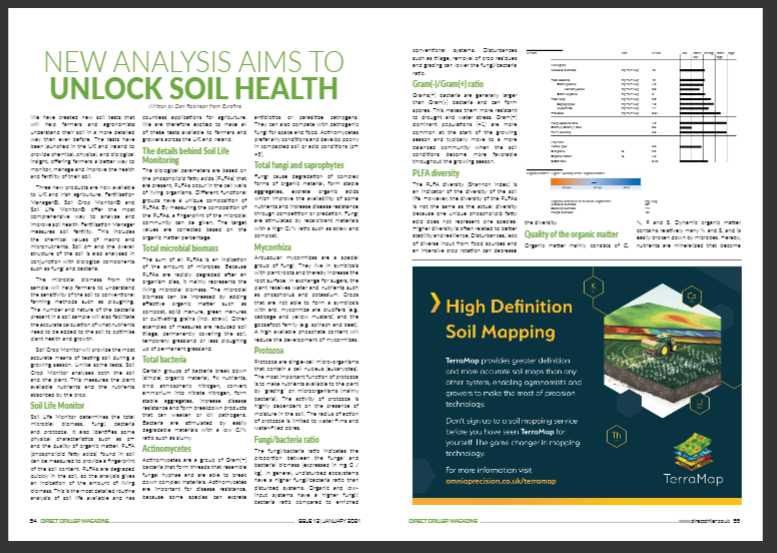 Written by Dan Robinson from Eurofins

We have created new soil tests that will help farmers and agronomists understand their soil in a more detailed way than ever before. The tests have been launched in the UK and Ireland to provide chemical, physical, and biological insight, offering farmers a better way to monitor, manage and improve the health and fertility of their soil. Three new products are now available to UK and Irish agriculture. Fertilisation Manager®, Soil Crop Monitor® and Soil Life Monitor® offer the most comprehensive way to analyse and improve soil health. Fertilisation Manager measures soil fertility. This includes the chemical values of macro and micronutrients. Soil pH and the overall structure of the soil is also analysed in conjunction with biological components such as fungi and bacteria. The microbial biomass from the sample will help farmers to understand the sensitivity of the soil to conventional farming methods such as ploughing. The number and nature of the bacteria present in a soil sample will also facilitate the accurate calculation of what nutrients need to be added to the soil to optimise plant health and growth. Soil Crop Monitor will provide the most accurate means of testing soil during a growing season. Unlike some tests, Soil Crop Monitor analyses both the soil and the plant. This measures the plant available nutrients and the nutrients absorbed by the crop.

Soil Life Monitor determines the total microbial biomass, fungi, bacteria and protozoa. It also identifies some physical characteristics such as pH and the quality of organic matter. PLFA (phospholipid fatty acids) found in soil can be measured to provide a fingerprint of the soil content. PLFAs are degraded quickly in the soil, so the analysis gives an indication of the amount of living biomass. This is the most detailed routine analysis of soil life available and has countless applications for agriculture. We are therefore excited to make all of these tests available to farmers and growers across the UK and Ireland.

The details behind Soil Life Monitoring

The biological parameters are based on the phospholipid fatty acids (PLFAs) that are present. PLFAs occur in the cell walls of living organisms. Different functional groups have a unique composition of PLFAs. By measuring the composition of the PLFAs, a fingerprint of the microbial community can be given. The target values are corrected based on the organic matter percentage.

The sum of all PLFAs is an indication of the amount of microbes. Because PLFAs are rapidly degraded after an organism dies, it mainly represents the living microbial biomass. The microbial biomass can be increased by adding effective organic matter such as compost, solid manure, green manures or cultivating grains (incl. straw). Other examples of measures are reduced soil tillage, permanently covering the soil, temporary grassland or less ploughing up of permanent grassland.

Actinomycetes are a group of Gram(+) bacteria that form threads that resemble fungal hyphae and are able to break down complex materials. Actinomycetes are important for disease resistance, because some species can excrete antibiotics or parasitize pathogens. They can also compete with pathogenic fungi for space and food. Actinomycetes prefer airy conditions and develop poorly in compacted soil or acid conditions (pH <5).

Fungi cause degradation of complex forms of organic material, form stable aggregates, excrete organic acids which improve the availability of some nutrients and increase disease resistance through competition or predation. Fungi are stimulated by recalcitrant materials with a high C/N ratio such as straw and compost.

Arbuscular mycorrhizas are a special group of fungi. They live in symbiosis with plant roots and thereby increase the root surface. In exchange for sugars, the plant receives water and nutrients such as phosphorus and potassium. Crops that are not able to form a symbiosis with arb. mycorrhiza are crucifers (e.g. cabbage and yellow mustard) and the goosefoot family (e.g. spinach and beet). A high available phosphate content will reduce the development of mycorrhizas.

Protozoa are single-cell micro-organisms that contain a cell nucleus (eukaryotes). The most important function of protozoa is to make nutrients available to the plant by "grazing" on microorganisms (mainly bacteria). The activity of protozoa is highly dependent on the presence of moisture in the soil. The radius of action of protozoa is limited to water films and water-filled pores. 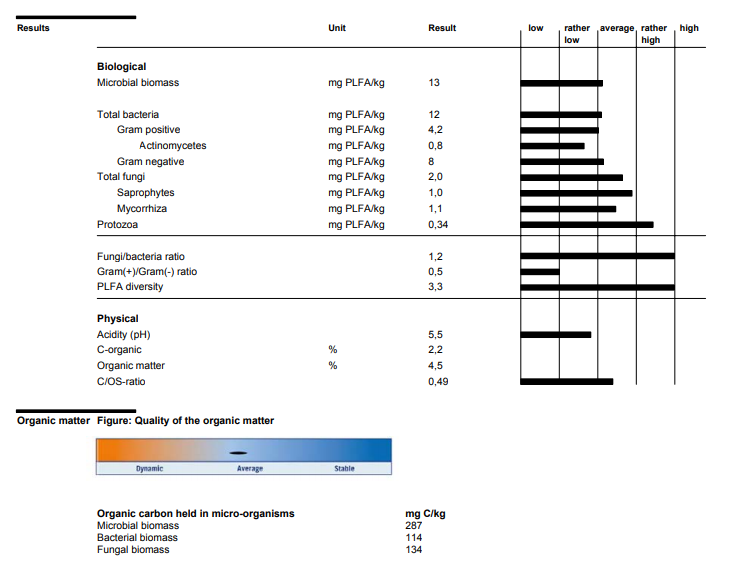 Grams(+) bacteria are generally larger than Gram(-) bacteria and can form spores. This makes them more resistant to drought and water stress. Gram(+) dominant populations (>1) are more common at the start of the growing season and typically move to a more balanced community when the soil conditions become more favorable throughout the growing season.

The PLFA diversity (Shannon index) is an indicator of the diversity of the soil life. However, the diversity of the PLFAs is not the same as the actual diversity because one unique phospholipid fatty acid does not represent one species. Higher diversity is often related to better stability and resilience. Disturbances, lack of diverse input from food sources and an intensive crop rotation can decrease the diversity.

Quality of the organic matter 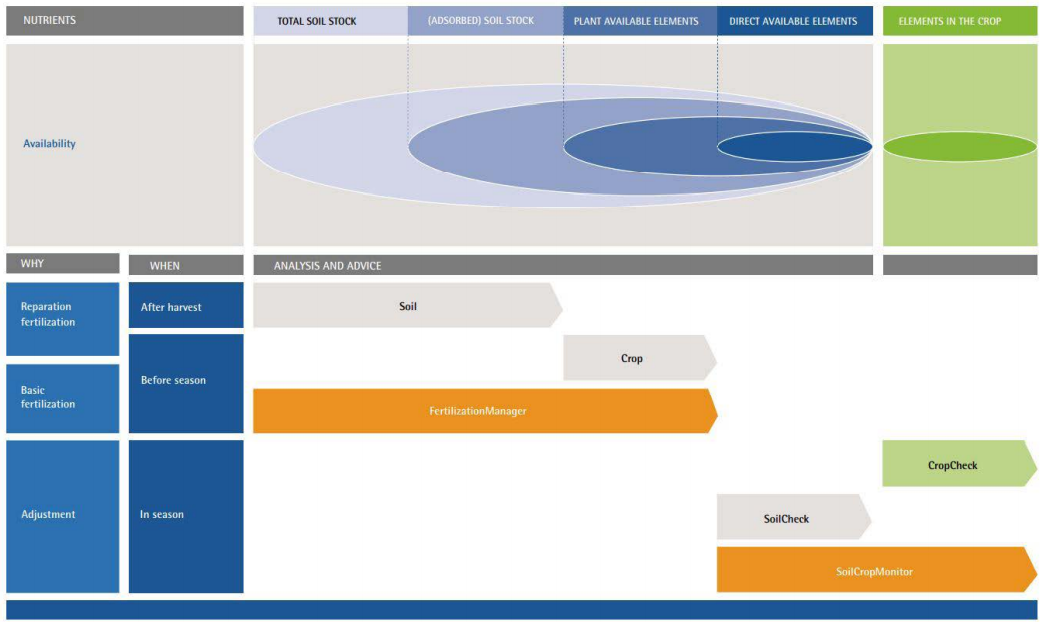 To provide insight into the functioning of the soil, Eurofins Agro distinguishes between the various fractions in which nutrients are present in the soil: direct available elements, plant available elements, (adsorbed) soil stock and total soil stock. Eurofins Agro supplies various analyses that provide insights into the nutrient reserve in the soil, the condition of the soil and uptake by the crop. The analysis report is always accompanied by crop and soil specific advice.

and Soil Life Check Plus here: https://www.marketplace.farm/grain-storage/analysis-and-measuring/soillifecheck-plus/
Click to expand...