The finalists for the 2020 British Farming Awards are announced 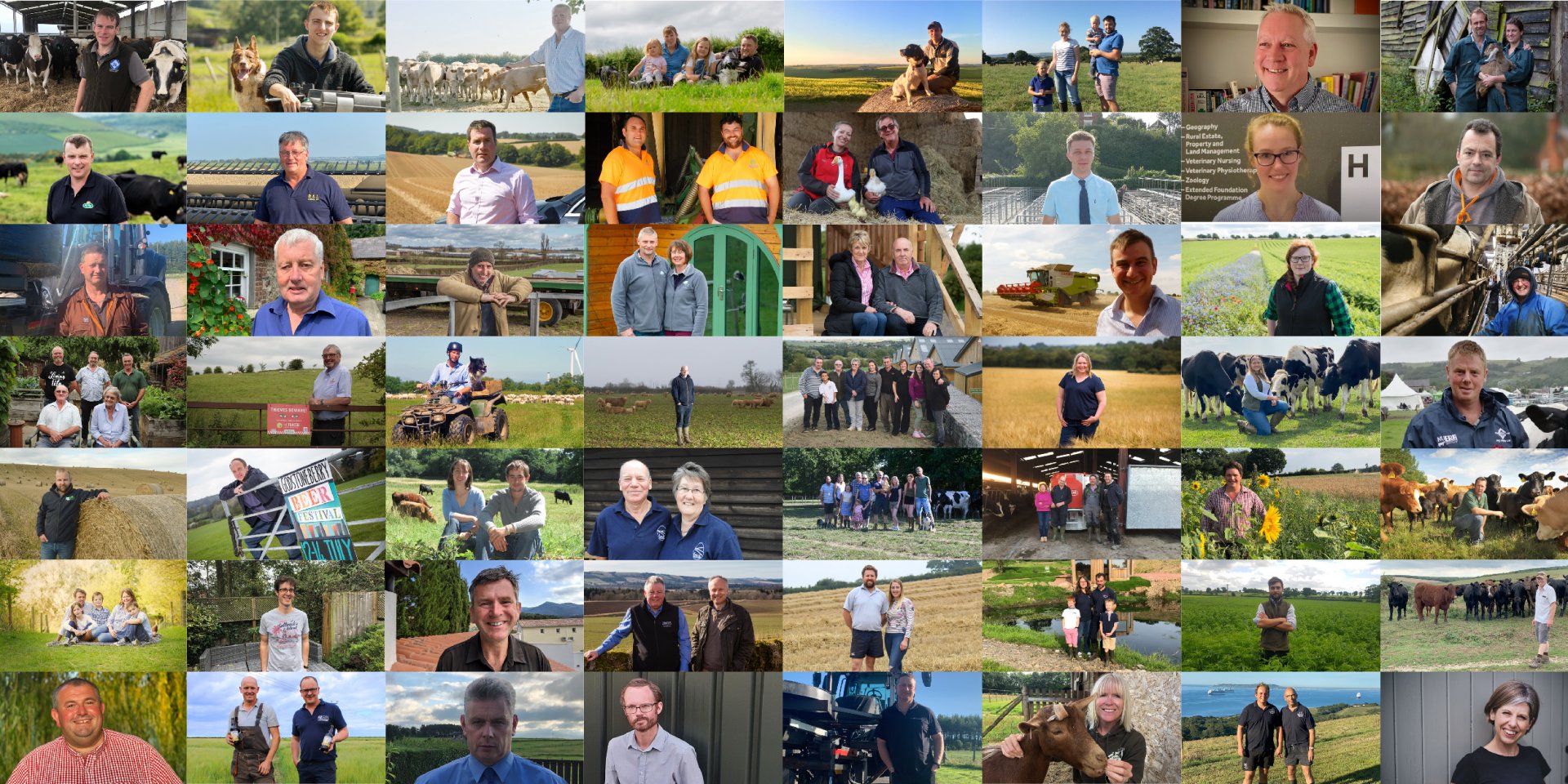 The British Farming Awards 2020 has welcomed a record number of registrations this year, a testament to the incredible work being done on farms throughout Britain.

Fifty-six individuals will now battle it out for the 14 categories up for grabs which highlight the innovation and diversity of UK agriculture.

Alongside the core sectors of agriculture including dairy, beef, sheep, arable and contracting, the awards also celebrate new entrants coming into the industry, the wealth of diversification businesses and family farms and recognition to the evolving presence of agri technology within agriculture.

A further two awards – Outstanding Contribution to British Agriculture and Farmers Guardian Farming Hero – will be announced during the awards evening which will be held virtually on Wednesday, October 21.

Now entering its eighth year, the British Farming Awards has become a nationally recognised event which has celebrated, showcased and rewarded hundreds of British farmers who have successfully introduced innovation to drive their business forward, despite ever-increasing challenges.

As households around the nation have relied on farmers and local producers to serve the nation during the Covid-19 pandemic, the industry has welcomed a new appreciation from the public and this year’s event is more poignant than ever.

Sophie Throup, Head of Agriculture, Fisheries and Sustainable Sourcing at Morrisons, said the awards was a welcome reminder of the dedication and hard work demonstrated by UK farmers all year round.

She said: "In these unprecedented times, we would like to thank and celebrate the work of British farmers and growers who are helping to feed the nation.

“At Morrisons, we have always valued British farming and being able to buy products directly from farms for our stores and the many food banks who rely on us is now more important than ever.

“The awards provides us with a timely reminder to pause and acknowledge the effort, innovation and skills which go into providing food farmed to high standards that we all enjoy."

Member · From NCC, Birmingham
Celebrating the innovative, determined and extraordinary farmers across all sectors, The British Farming Awards showcase the diversity and adaptability of the UK’s farming community, no matter the size or scale of your business.
Media 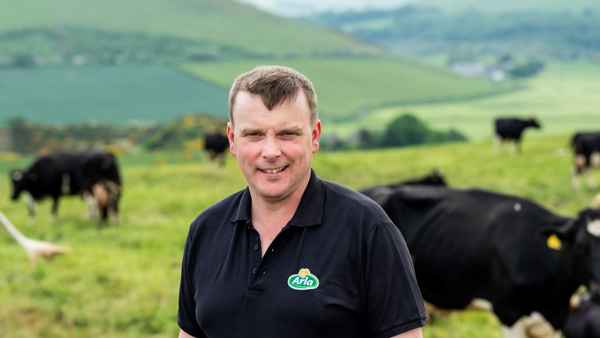 Strategic investment to modernise Tom Neill’s farm is helping improve cow health and welfare and the happiness of employees.

Based at Thornington Farm, in the foothills of the Northumberland National Park, Tom’s business operates across 1,093 hectares (2,700 acres) of part-owned and part-rented land, with seven employees. He supplies Arla and is part of the co-op’s 360 programme.

Find out more at https://www.britishfarmingawards.co.uk/tom-neill/ 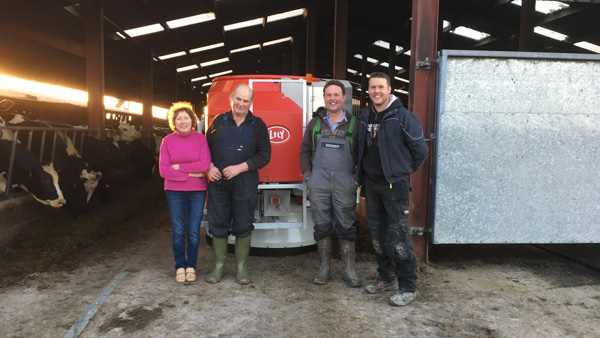 The latest technology is improving cow health and yields and reducing emissions and costs on 214-hectare (529-acre) Stublach Farm.

Managed by Anthony Oakes, the tenanted farm supplies milk to Sainsbury’s via Muller, with a closed herd of about 515 pedigree Holstein Friesians.

The 43% highest yielding cows are housed all-year-round, so they can be carefully fed, cleaned and monitored using a robotic milking system.

Find out more at https://www.britishfarmingawards.co.uk/anthony-oakes/ 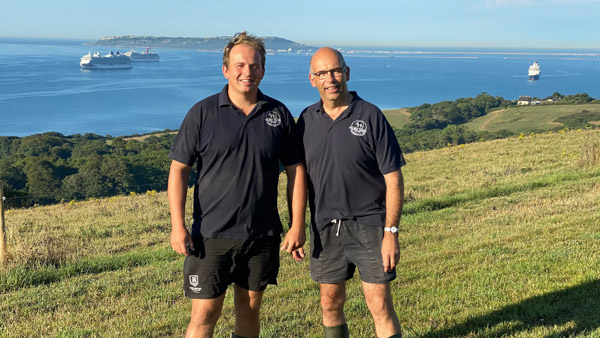 They manage three dairy units and one arable unit in Dorset, through tenancies and contract farming agreements, with the help of a farm manager, dairy manager and 16 staff. Milk is supplied to Morrisons as members of the Arla co-operative.

A herd of 240 autumn calving cows is milked at Littlewood Farm, with self-feed silage and grazing system. Longlands Farm has 320 spring-calving cows in a New Zealand style system and Lower Dairy has 420 autumn-calving cows on a grazing and total mixed ration system.

Find out more at https://www.britishfarmingawards.co.uk/george-and-william-holmes/ 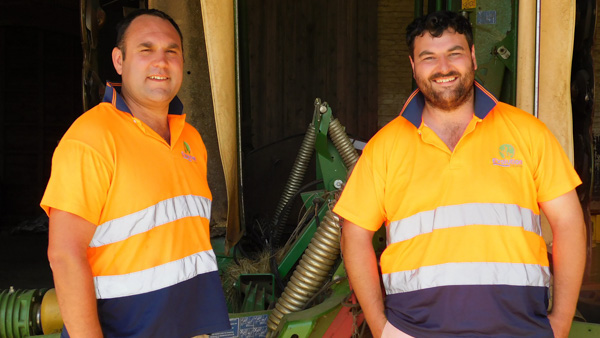 Over a decade, Tom Rawson and Charlie Crotty have grown their dairy business, Evolution Farming, by ‘focusing on people as well as cows’.

Starting on Tom’s home farm in Yorkshire and a tenancy in Lincolnshire, Tom and co-founder Oliver Hall quickly established their business before Charlie Crotty joined the business in 2015, bringing management agreements in Norfolk and Cheshire and the opportunity to take on a tenancy in Leicester.

Find out more at https://www.britishfarmingawards.co.uk/tom-rawson-and-charlie-crotty/ 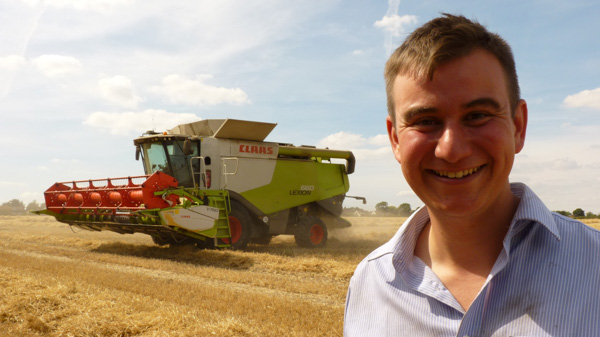 George Young farms in partnership with his parents growing about 486 hectares of crops, as well as raising store cattle on their farm in Fobbing.

He returned to the farm six years ago after a pursuing a career in banking in the capital.

It did not take long to convince his father the business needed to adopt an agroecological approach, initially going no-till in 2014, to now no longer using insecticides and growing a wide rotation, which includes heritage wheat, oilseed rape, winter beans, spring beans, spring peas, buckwheat, lentils, hemp and herbal leys.

Find out more at https://www.britishfarmingawards.co.uk/george-young/ 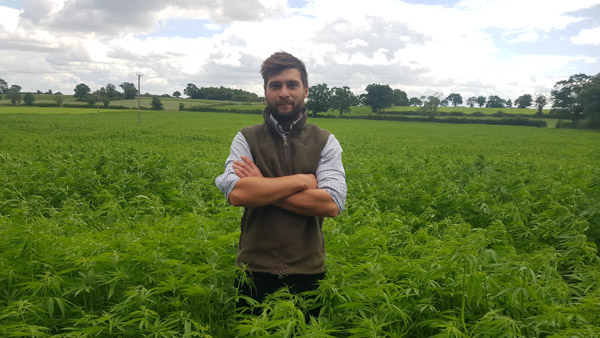 The crop is cold-pressed to create a cooking oil which is favoured by the health food movement. It is sold through local farmshops, health food stores and online.

One particular target audience has been that of the vegetarian and vegan community, with the aim to strengthen the relationship between farmers and consumers. The high protein bi-product of bottled hemp oil is fed to the farm’s sheep flock as a complete nutritional and palatable animal feed which has successfully finished a selection of trialled spring lambs.
Find out more at https://www.britishfarmingawards.co.uk/edward-burman/ 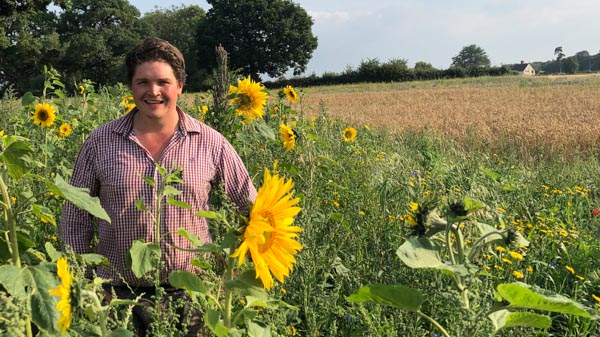 Charles Antrobus moved to a more regenerative approach four years ago on his family’s mixed farming enterprise when cropping and tillage plans were no longer performing.

The business is made up of owned, tenanted and contracted mainly arable land totalling 467 hectares across nine farms. The new system follows three key principals: no soil inversion; always having living roots in the soil; and a wide crop rotation to promote soil health.

Find out more at https://www.britishfarmingawards.co.uk/charles-antrobus/
T 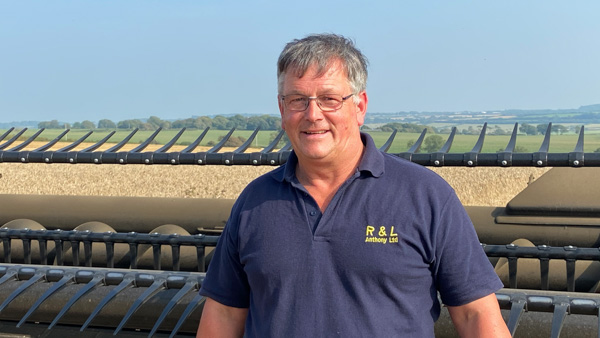 Richard Anthony operates a diverse, progressive arable enterprise which integrates livestock and renewable energy, with a focus on soil health.

Richard and his wife Lynwen have developed the farm from a 45ha tenanted holding to a sustainable and profitable business over the past 23 years.

Find out more at https://www.britishfarmingawards.co.uk/richard-anthony/ 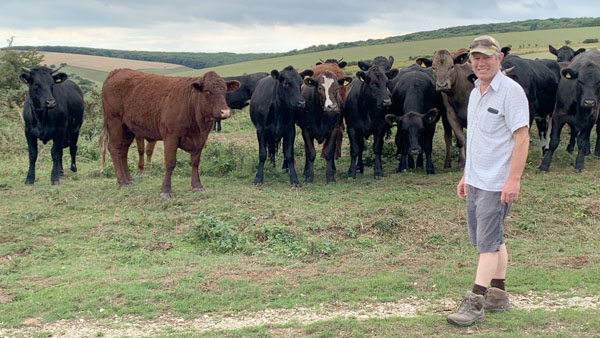 Andrew Hodgson believes that if a job is worth doing, it’s worth doing well. And there is no shortage of jobs adopting that very ethos on his Isle of Wight farm in Shorwell.

As well as the 400 beef cattle, 1,500 sheep and arable unit he and his wife and sons have an arable contracting business and run a varied portfolio of diversifications.

Today, the family have three holiday cottages, an organic recycling business including the contract to spread all island sewerage sludge and digestate for a local AD plant and a mountain bike track. This on top of a new meat business is all in a day’s work at Cheverton Farm.

Find out more at https://www.britishfarmingawards.co.uk/andrew-hodgson/ 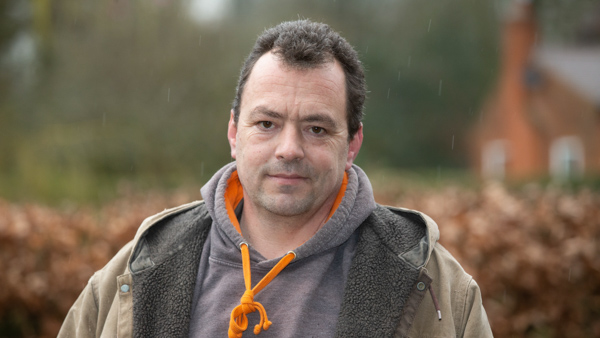 His Chesham herd was founded by his grandfather Tony who imported the first Charolais semen to the UK in the 1950s, followed by live cattle in the early 1960s.

The herd now consists of 50 cows which run with Ben’s father Dan’s ‘Silver’ herd plus followers, totalling 120 head. Pedigree bulls are sold off the farm and via breed society sales.

Find out more at https://www.britishfarmingawards.co.uk/ben-harman/ 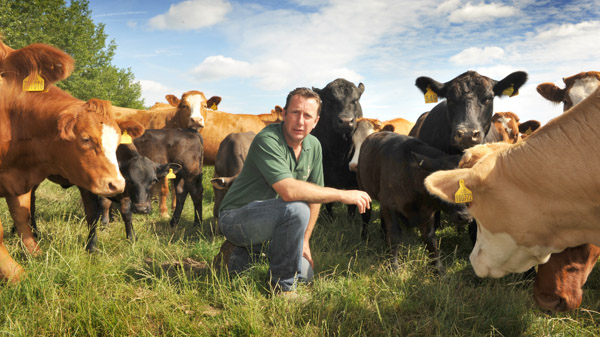 The confidence to invest in the beef herd at Holkham Estate in Norfolk, came from the certainty that increasing numbers would bring many benefits to the business.

With more than 800ha of grassland – half of which is SSSI national nature reserve – they needed 1,000 head of cattle to manage it sensitively.

External graziers had been using the land, alongside a smaller Holkham herd, but in 2015 farm manager James Beamish, livestock manager Jon Smith and the team decided it was preferable to have full control.

Find out more at https://www.britishfarmingawards.co.uk/jon-smith/ 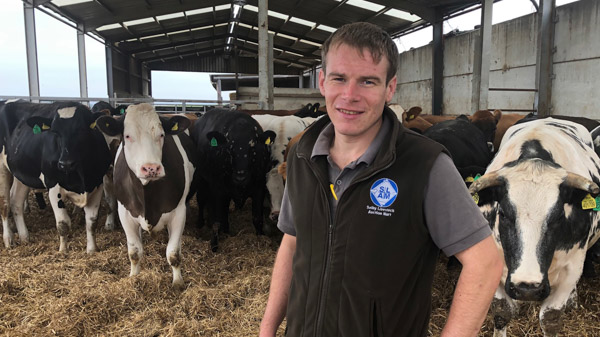 Keeping a close eye on all costs has enabled Mark Crapper to make significant improvements to his family’s beef unit in Billingley, near Barnsley.

Mark works with his parents John and Sue and brother Matt and together they finish 1,650 cattle and 900 store lambs every year, on their tenant farm on the Fitzwilliam Wentworth Estate.

They purchase cattle from local markets focussing on continentals with some Aberdeen Angus and Herefords as well. Typically, beasts are 18 months or older and already around 500kg so aren’t on the farm for long, but the family aim to maximise their productivity in that time.

Find out more at https://www.britishfarmingawards.co.uk/mark-crapper/ 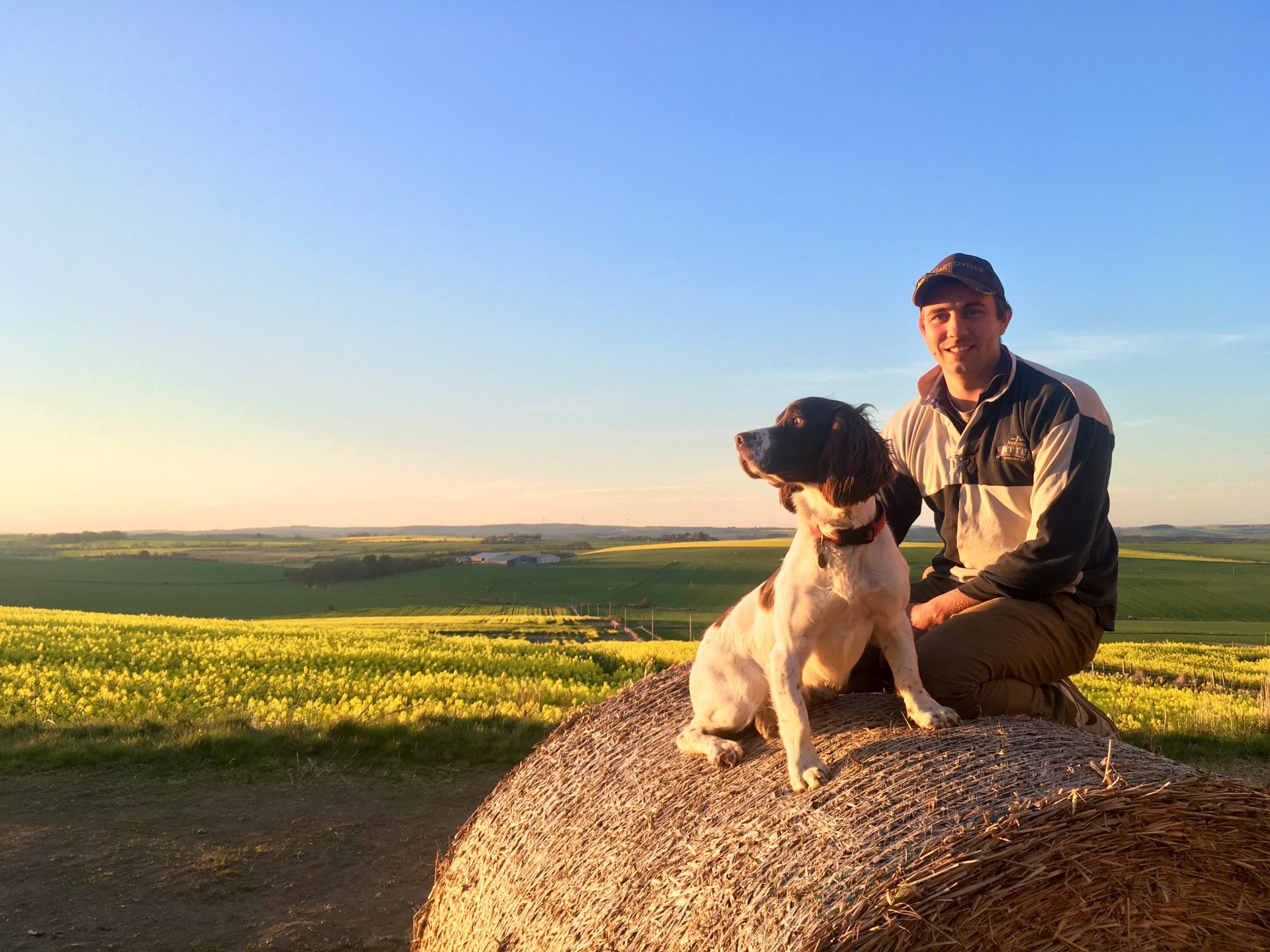 Not originally from a farming background, Ben Lowe has never given up on his dream to farm to become a farmer.

Today he now operates a 160-hectare tenancy in Aberdeenshire, which is focused on arable enterprises and backed up by a bed and breakfast pig enterprise and winter cattle.

The farm is predominately run as an arable unit, growing a mixture of wheat, malting barley, oilseed rape and oats.

Find out more at https://www.britishfarmingawards.co.uk/ben-lowe-2/ 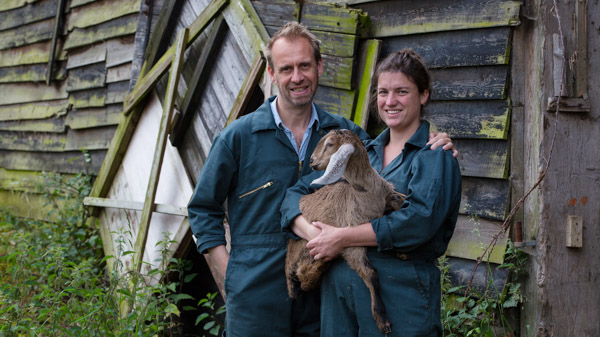 It is funny how chance can play its part in prompting new business ideas.

Back in 2014, Rachel Yarrow happened to pick up an old copy of Woman and Home magazine which had been left in a villa she and husband Fraser were staying in while on holiday in Italy. In the magazine was an article about a woman who had a herd of 30 goats and made cheese.

On the plane home, Fraser and Rachel went from joking about how they should do that instead of their old jobs, as a project manager and teacher, respectively, to drawing up a business plan and starting the enterprise.

Find out more at https://www.britishfarmingawards.co.uk/rachel-yarrow-and-fraser-norton/ 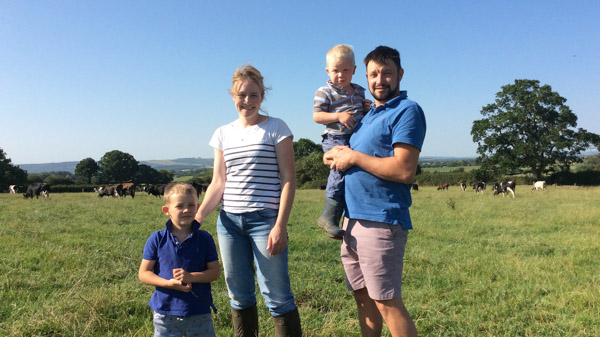 Martyn and Claire Eastham run a 120-cow spring calving herd on a Dorset County Council farm. This year they have managed to extend their farm by an additional adjoining 38 hectares, as they are looking to grow their herd.

Selling milk to Barber’s Cheesemakers, the couple started their dairy journey in January 2015 on a share farming partnership near Shepton Mallet, Somerset, where they took on significant debt against a backdrop of a declining milk price.

Having successfully come through this challenging start, the Easthams have thrived since then and continue to build up their business. They have recently started to sell cheese they produce direct from the farm

Find out more at https://www.britishfarmingawards.co.uk/martyn-claire-eastham/ 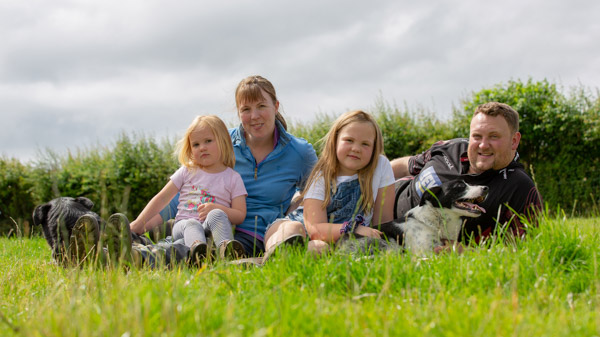 With careers off-farm and a young family to keep them busy, Ross and Kirsty Williams have still found the time to transform Upper Tullochbeg farm since they took it on in 2013.

When they came to the Forestry Commission-owned farm, they only had 90 ewes, but in the seven years since they have significantly built the size and scale of the enterprise and manage 195 acres in varying forms.

The unit now consists of 90 pedigree sheep, which are a mixture of Beltex and Bluefaced Leicesters, 110 Suffolk cross commercial ewes, seven pedigree Shorthorn cows, 25 commercial Blue Grey cows, 400 turkeys reared for the Christmas market and a swathe of forage crops and grassland to underpin the unit.

Find out more at https://www.britishfarmingawards.co.uk/ross-and-kirsty-williams-2/ 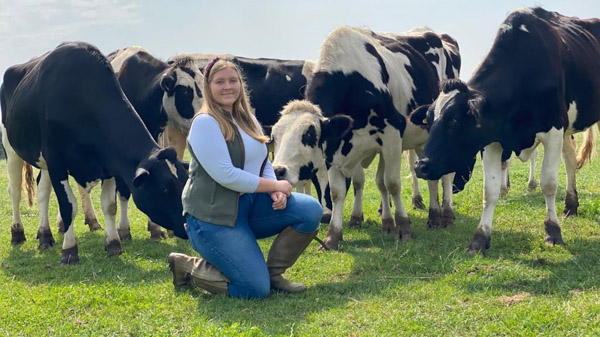 Megan Edwards’ list of achievements and activities is as fully comprehensive as it gets, seizing every opportunity which presents itself to further her practical and personal skillset.

From a non-farming background, Megan has pro-actively completed a wide range of work experiences and she credits her strong work ethic as facilitating constant learning and increasing her passion for UK agriculture.

Find out more at https://www.britishfarmingawards.co.uk/megan-edwards/ 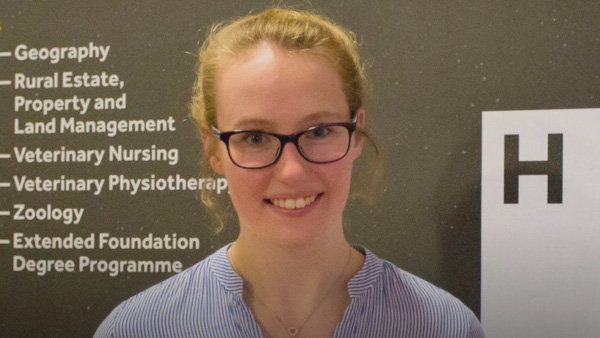 With a palpable passion for the arable sector, Grace Welling has ensured she has secured qualifications and further knowledge wherever possible.

Alongside significant academic achievements, she has achieved her APHA licence for herbage crop inspections, completed her FACTS qualification and recently undertaken her BASIS qualification.

Enjoying her roles as student and course ambassador (where she raised £4,000 in sponsorship for course clothing), she completed a successful 12-month work placement with the Syngenta crop protection team, winning an award for her overall performance.