Bit of remedial work at my Pension funds,
replaced, unkept grass with gravel, at one, and replaced fence at another, 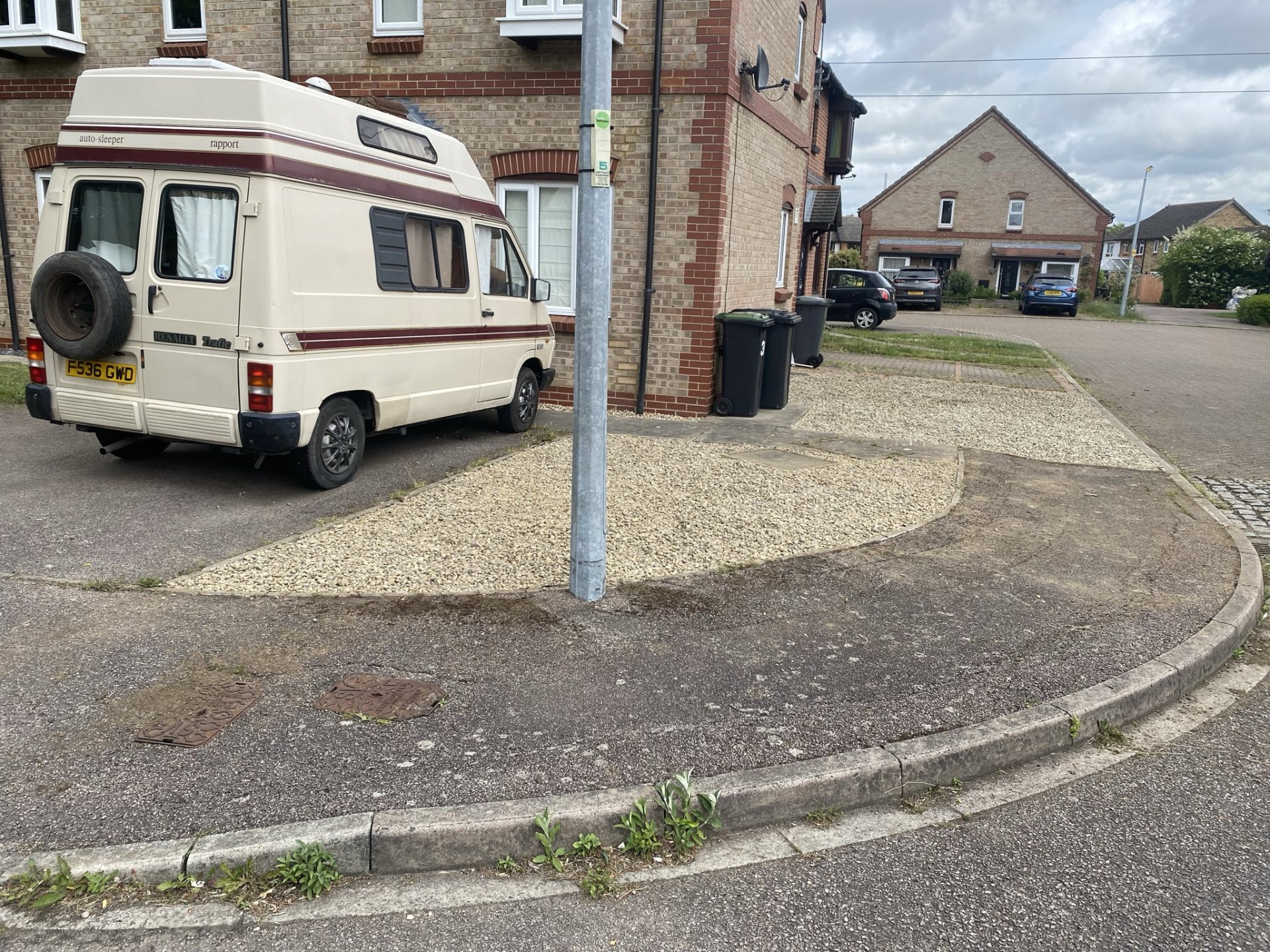 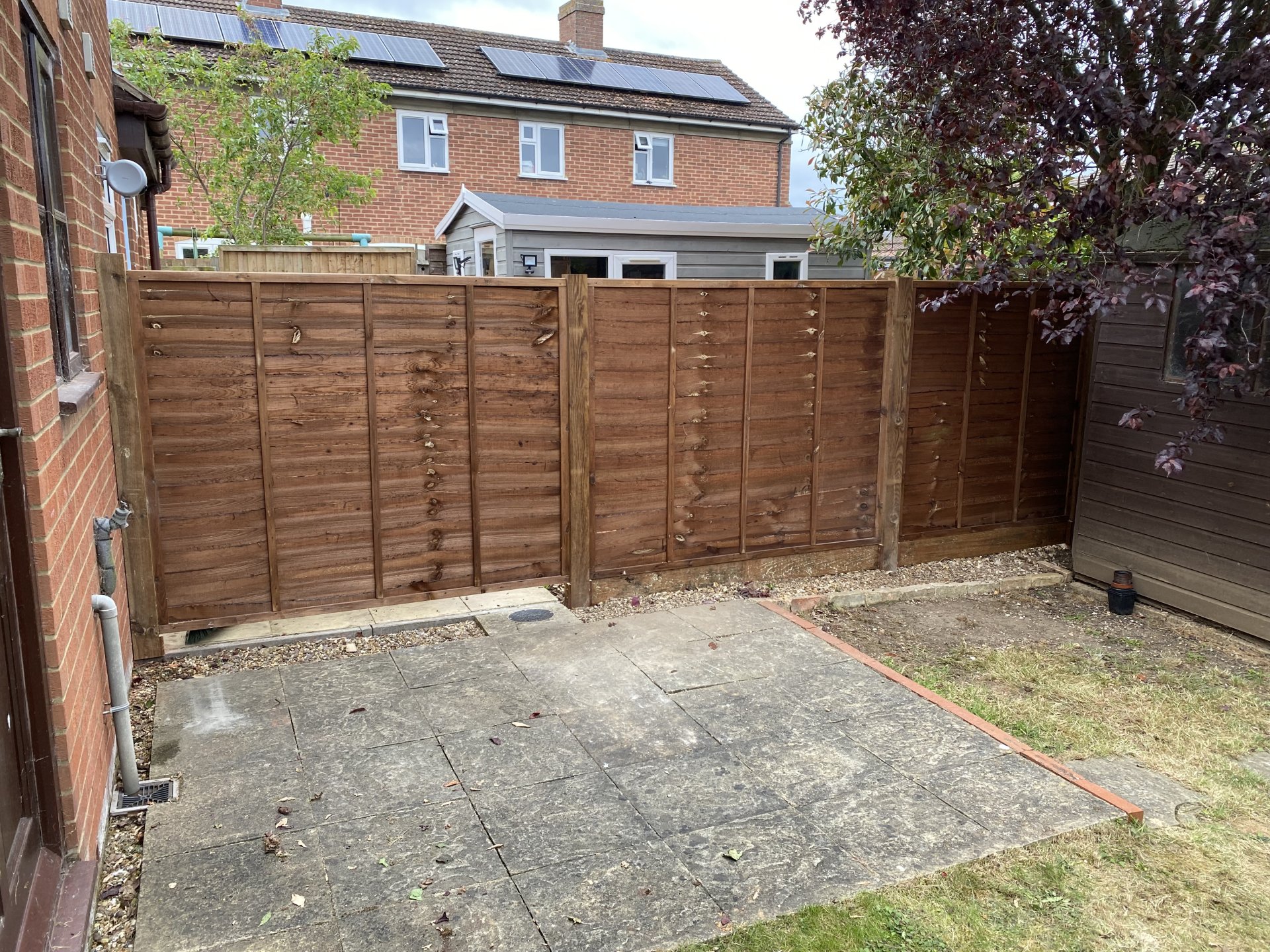 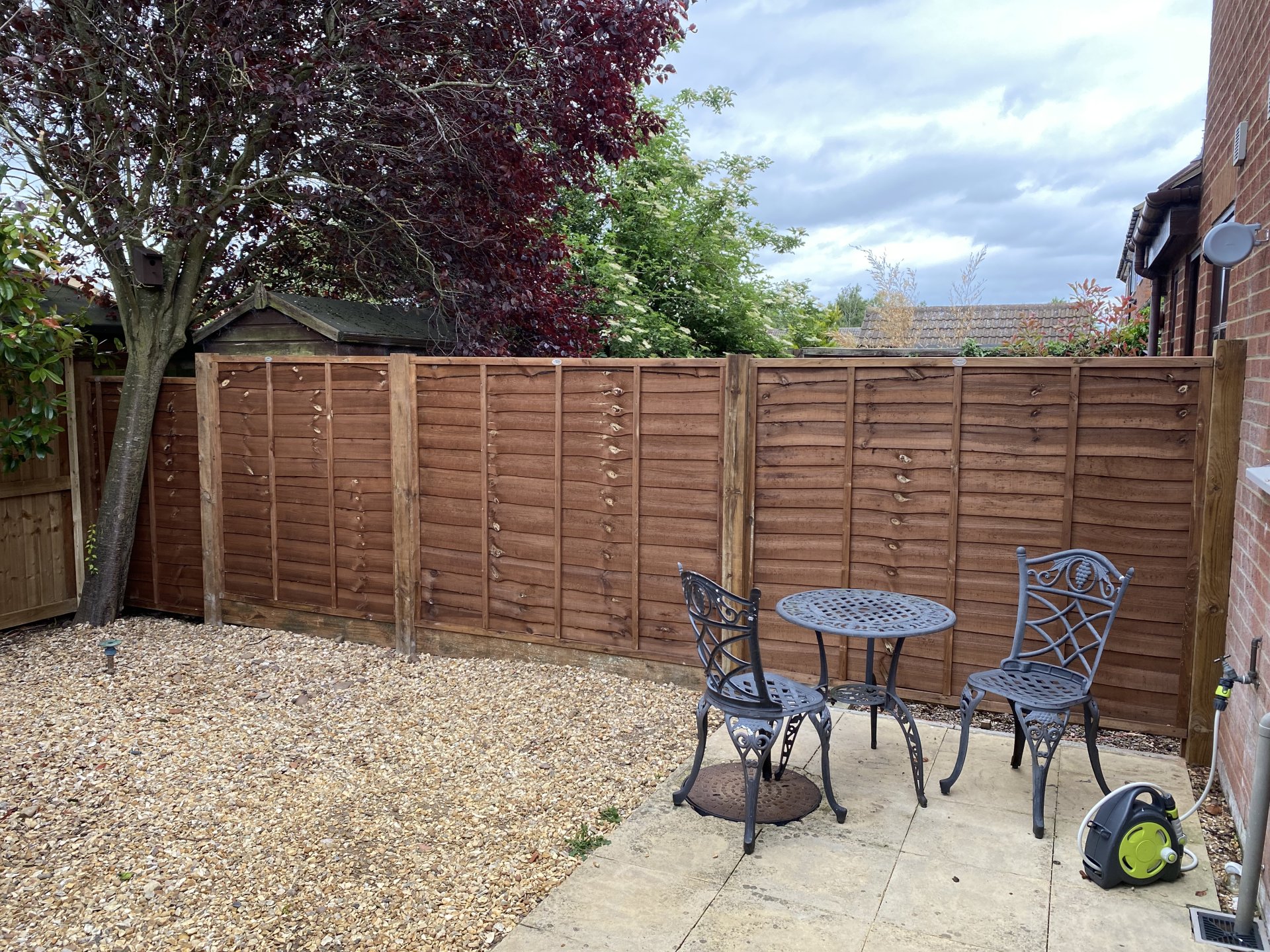 Lorry was booked to move the harvesters this morning. There is too many low trees on the local roads to lorry them from the yard so yesterday afternoon escorted tron 1 out to the designated meeting place. 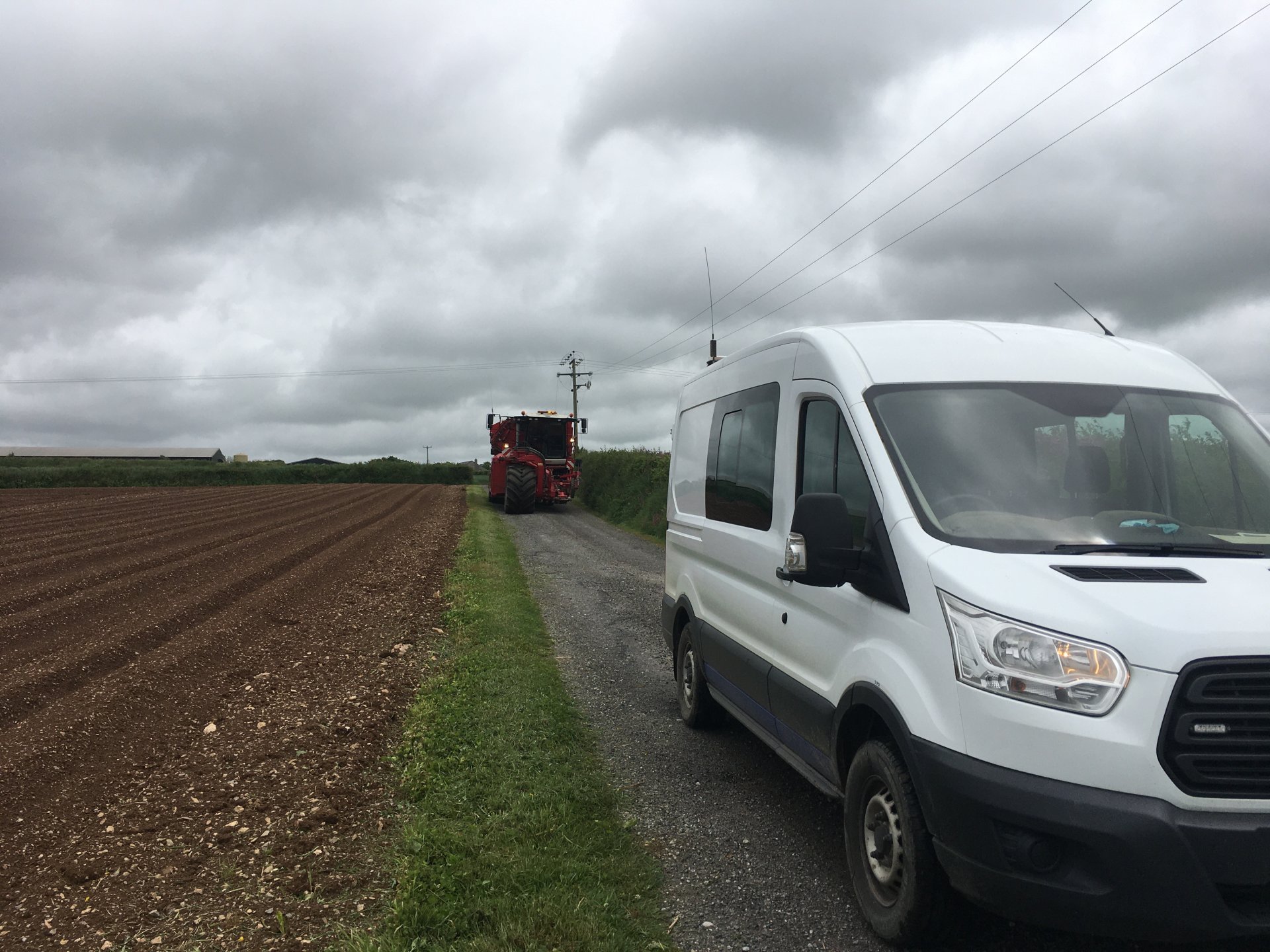 Then this morning it was my turn to cause caos. 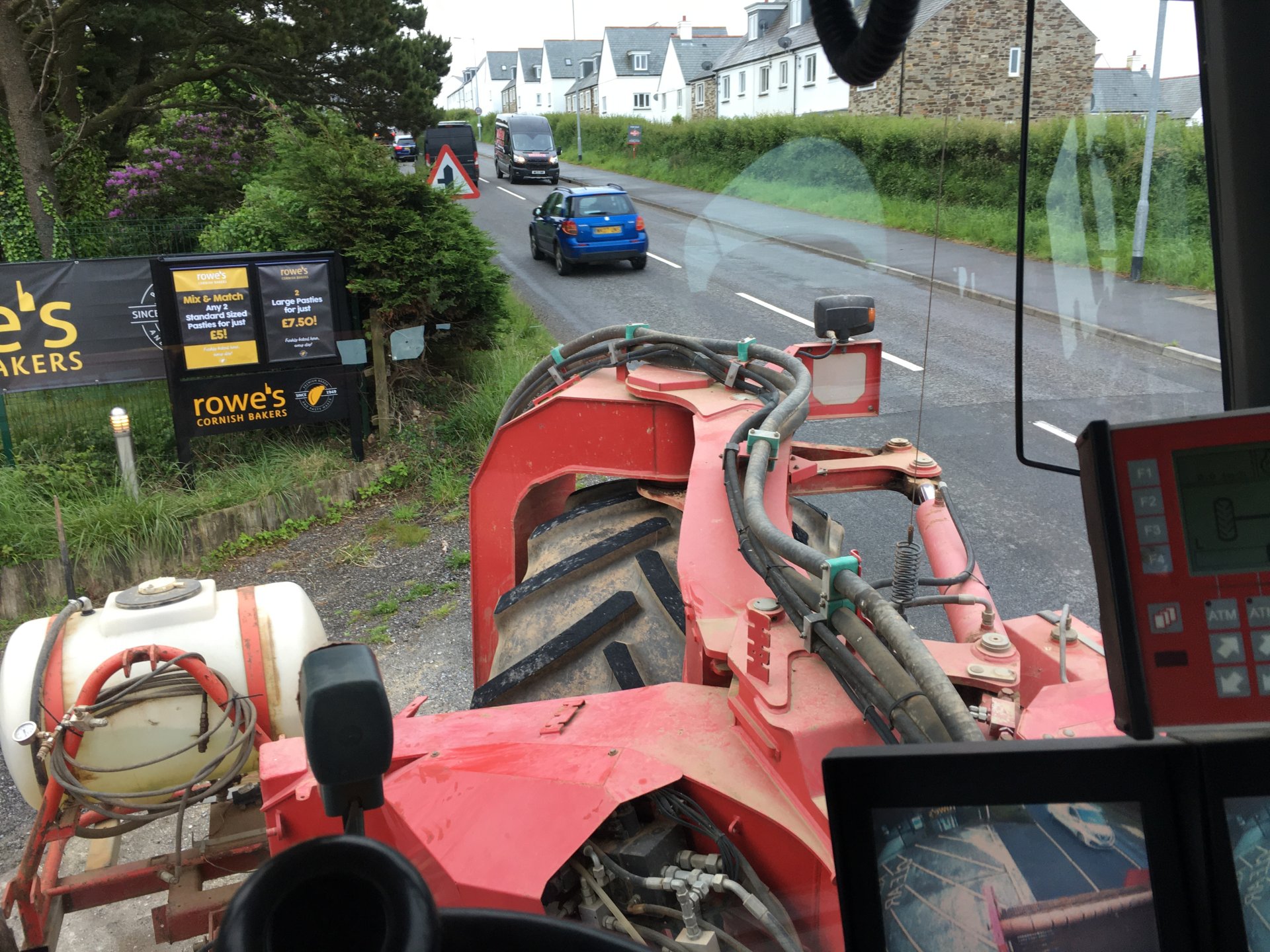 While tron ones driver helped the lorry get them shifted I drove the toppers down. 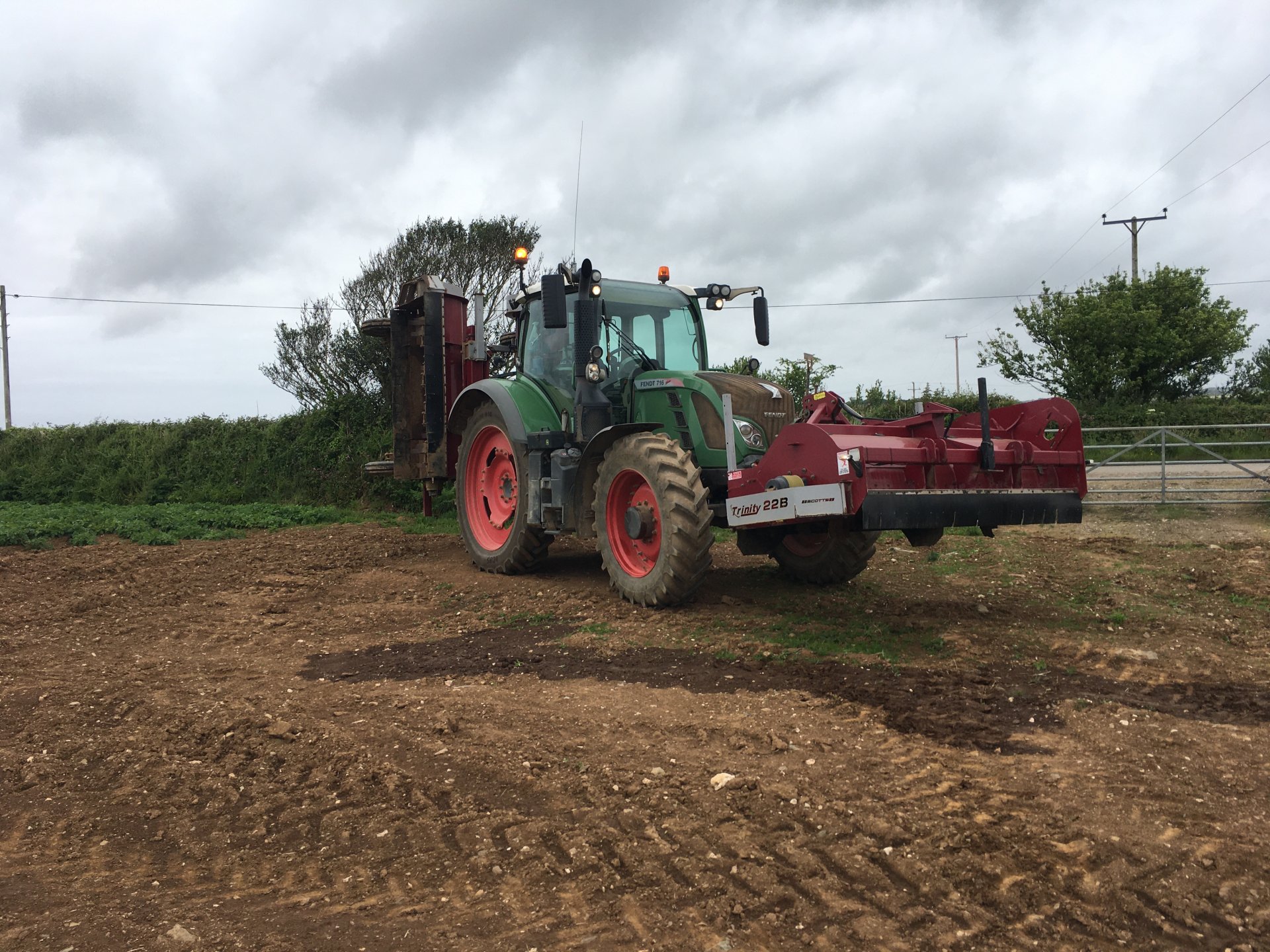 And then drove the harvesters the last mile or so into the first block of ground. 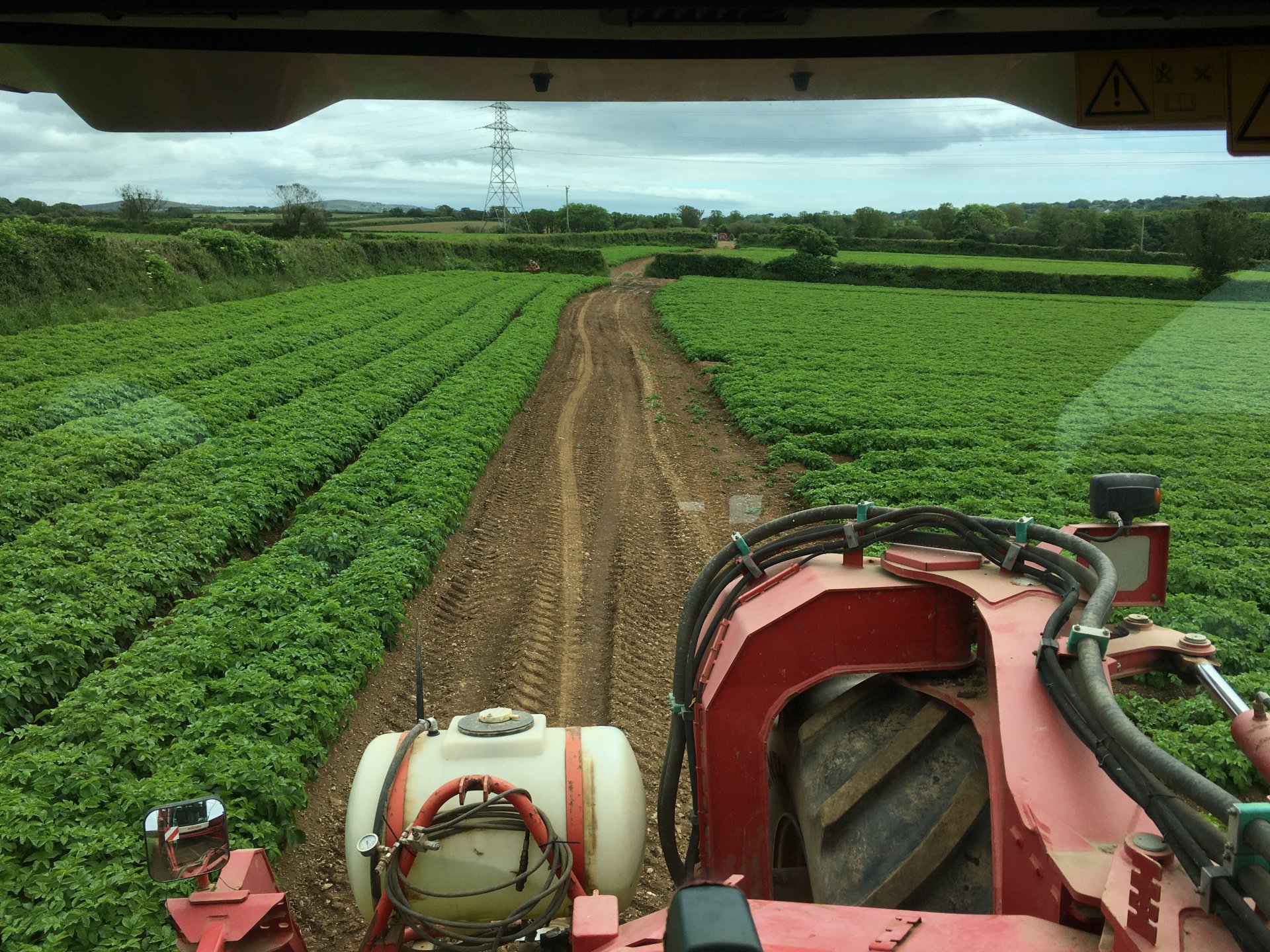 A handy place to pick up luncheon route?

So, some may be aware that I have 2 seperate lives. We have harvested high moisture ( 14% ) grain sorghum, so I have been blowing high volume air through the grain to keep it cool, prevent mould & also to dry it with “natural air” aeration. Trouble is, I don’t have 3 phase power, so have a 24kva genset running the fans, which doesn’t quite make 24 hours on a tank of fuel. So, I am going out ( 20 km each way ) twice a day to fuel it up, before & after my day job in town. So, this is out on the plain this morning before heading back into town 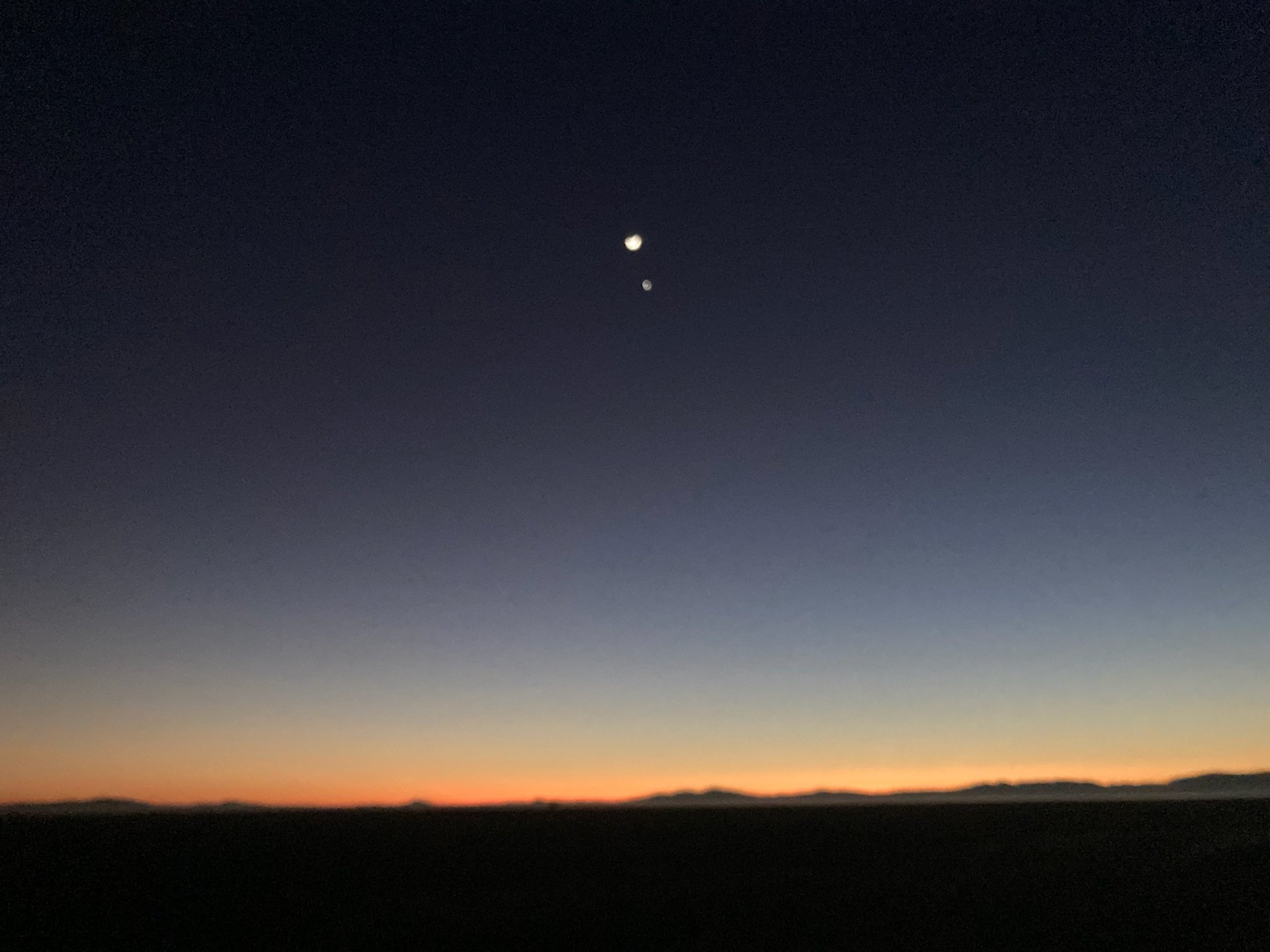 Linemarking for an AFL home game this weekend
$30,000 gps line marker. Still have to push it though 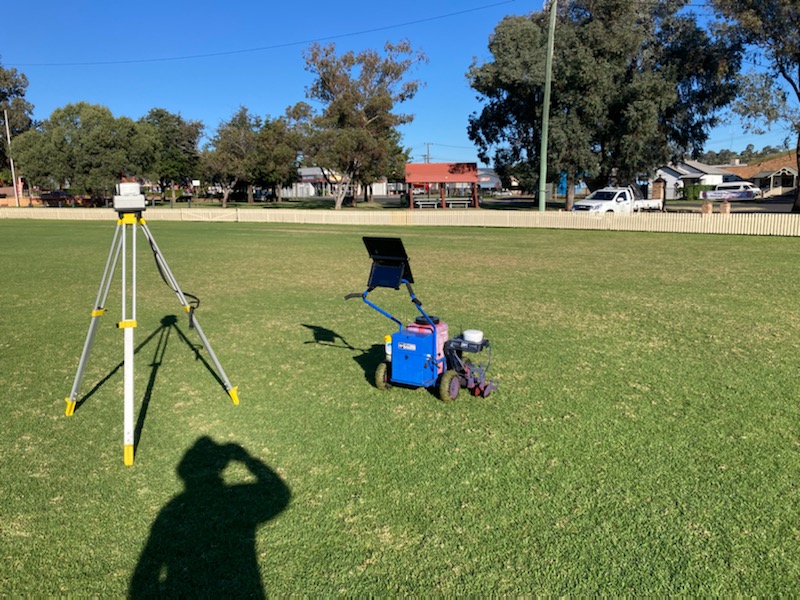 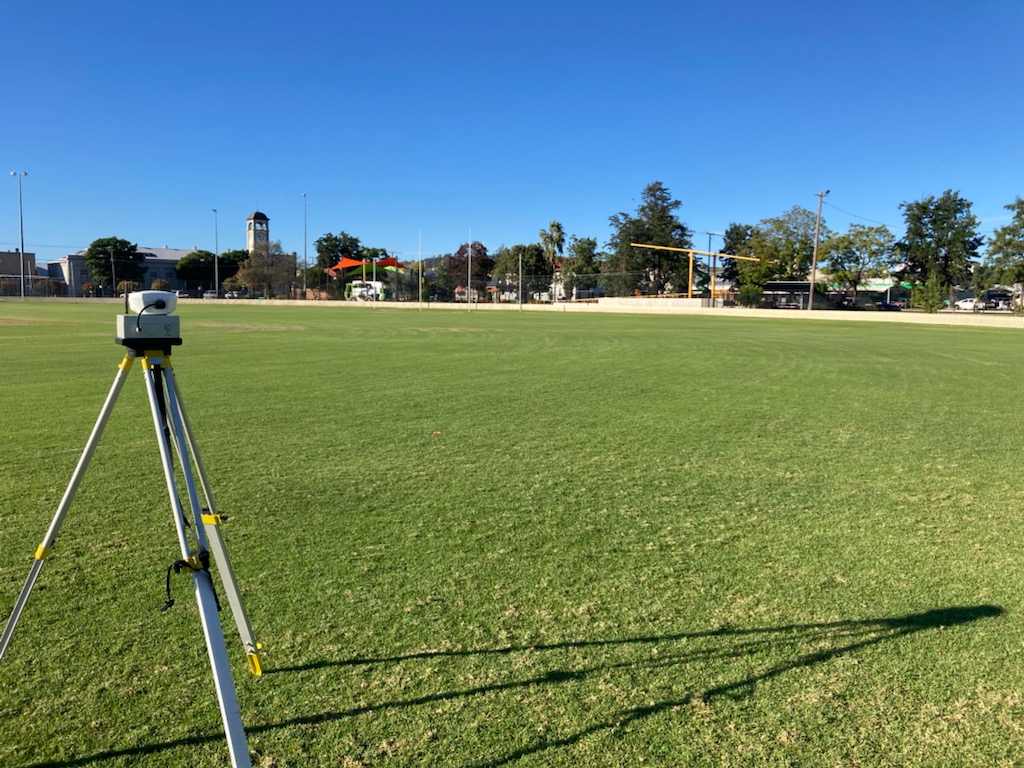 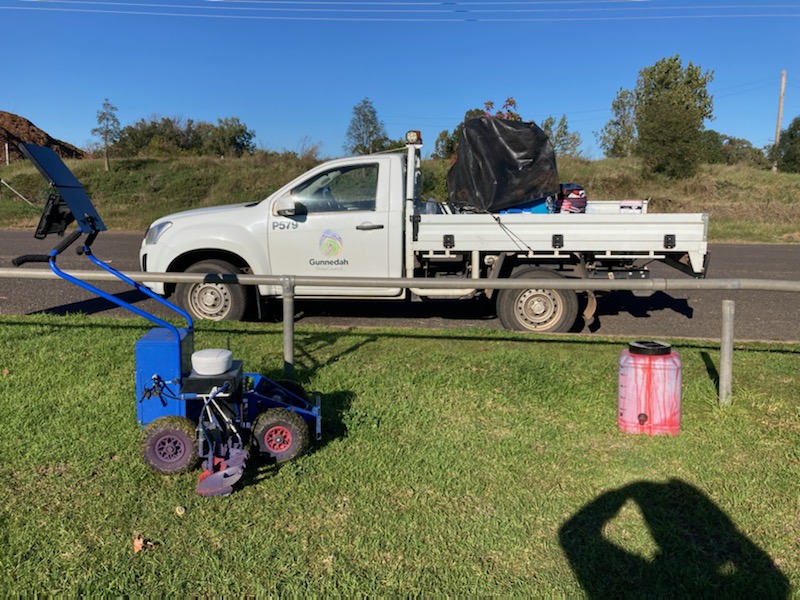 Ok, after work, back out to Curlewis to fuel up the headers 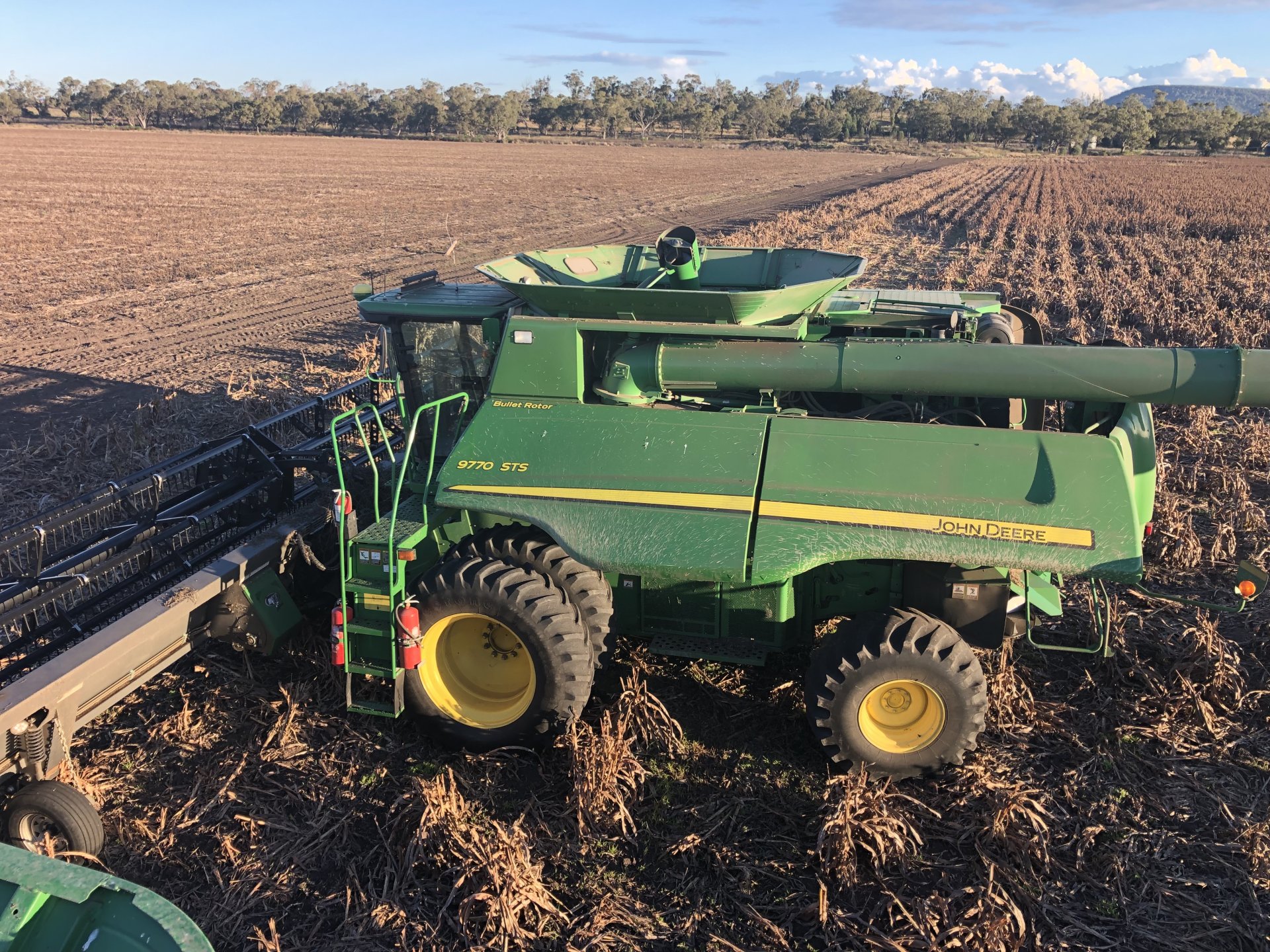 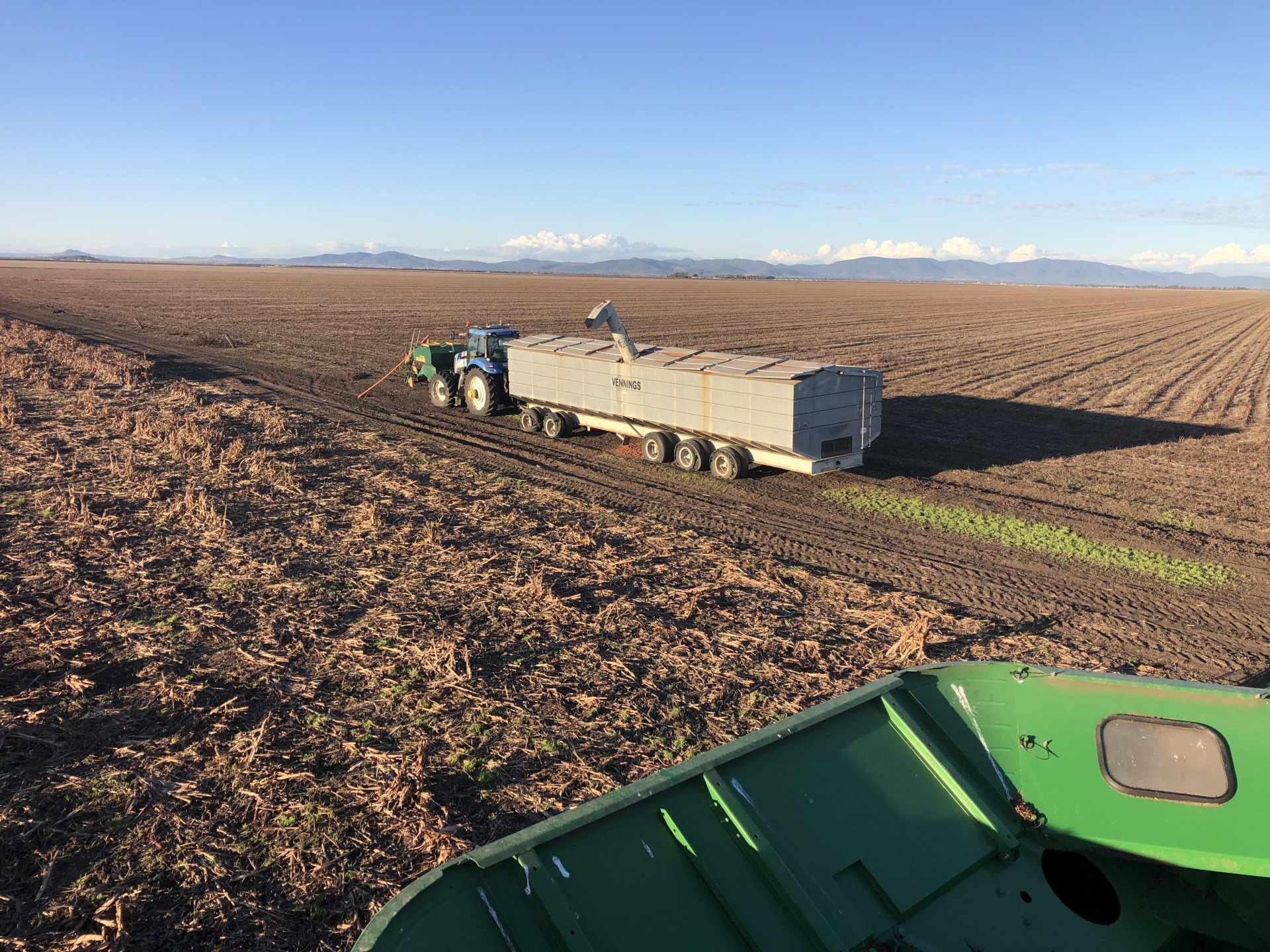 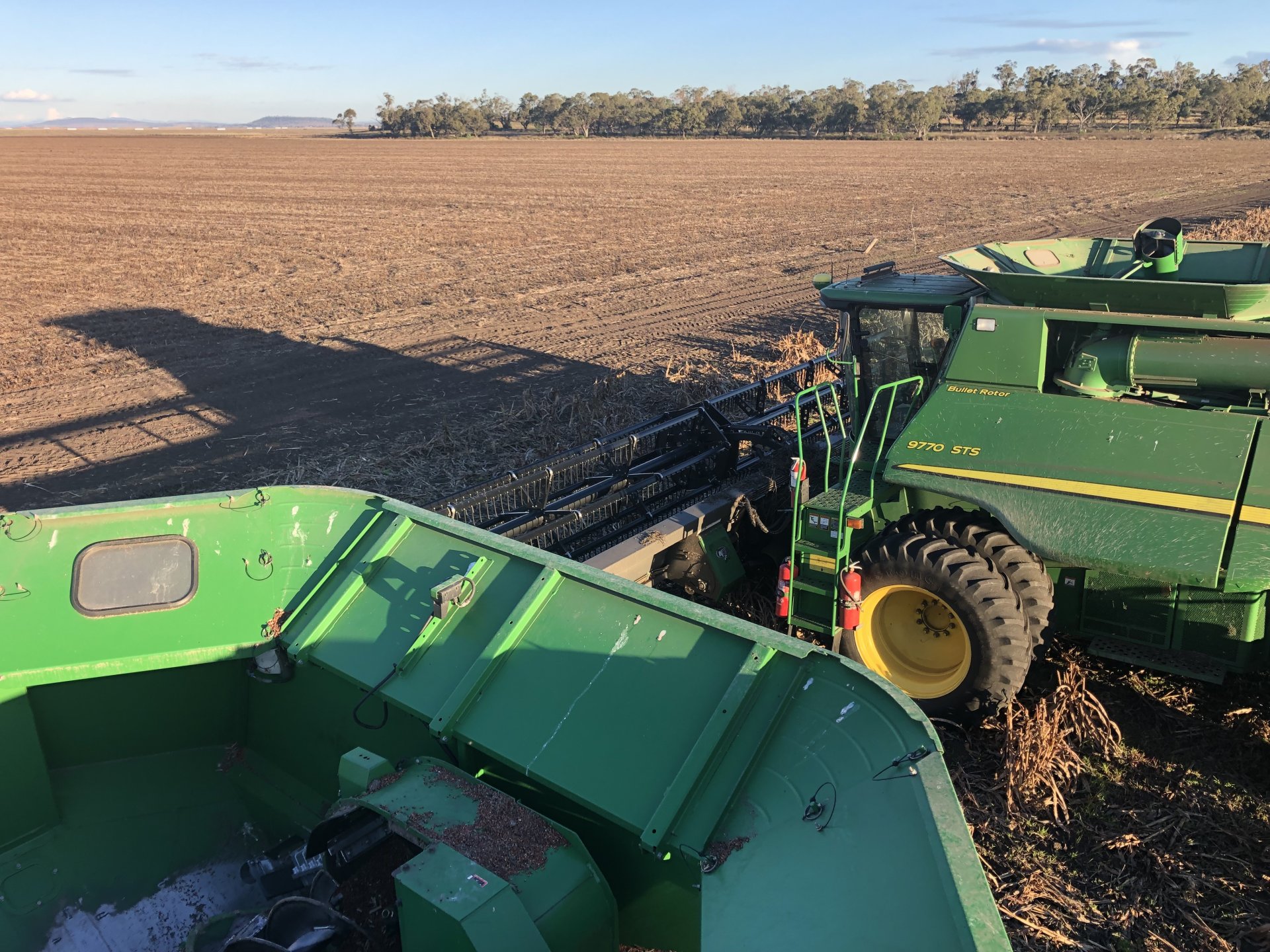 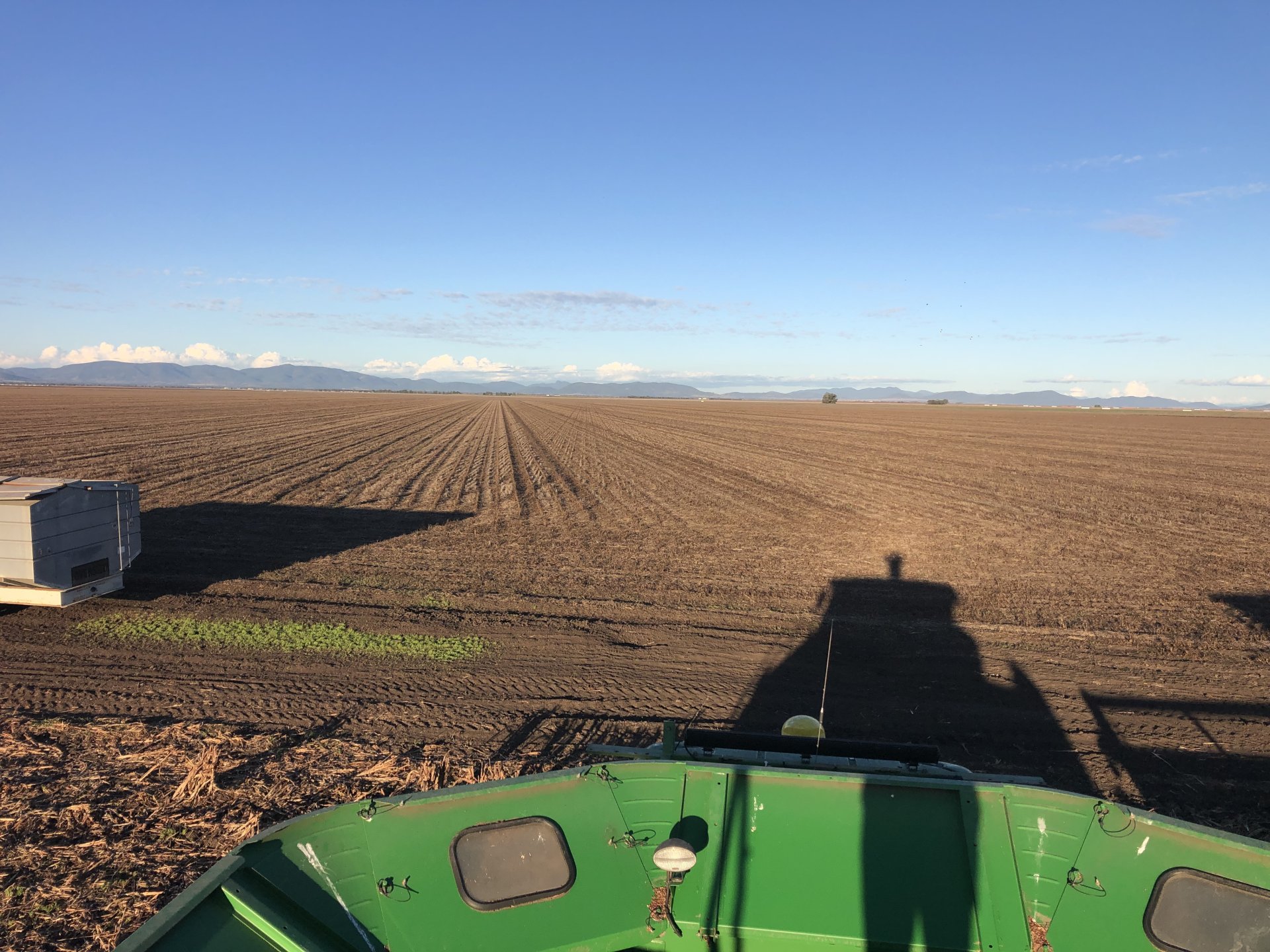 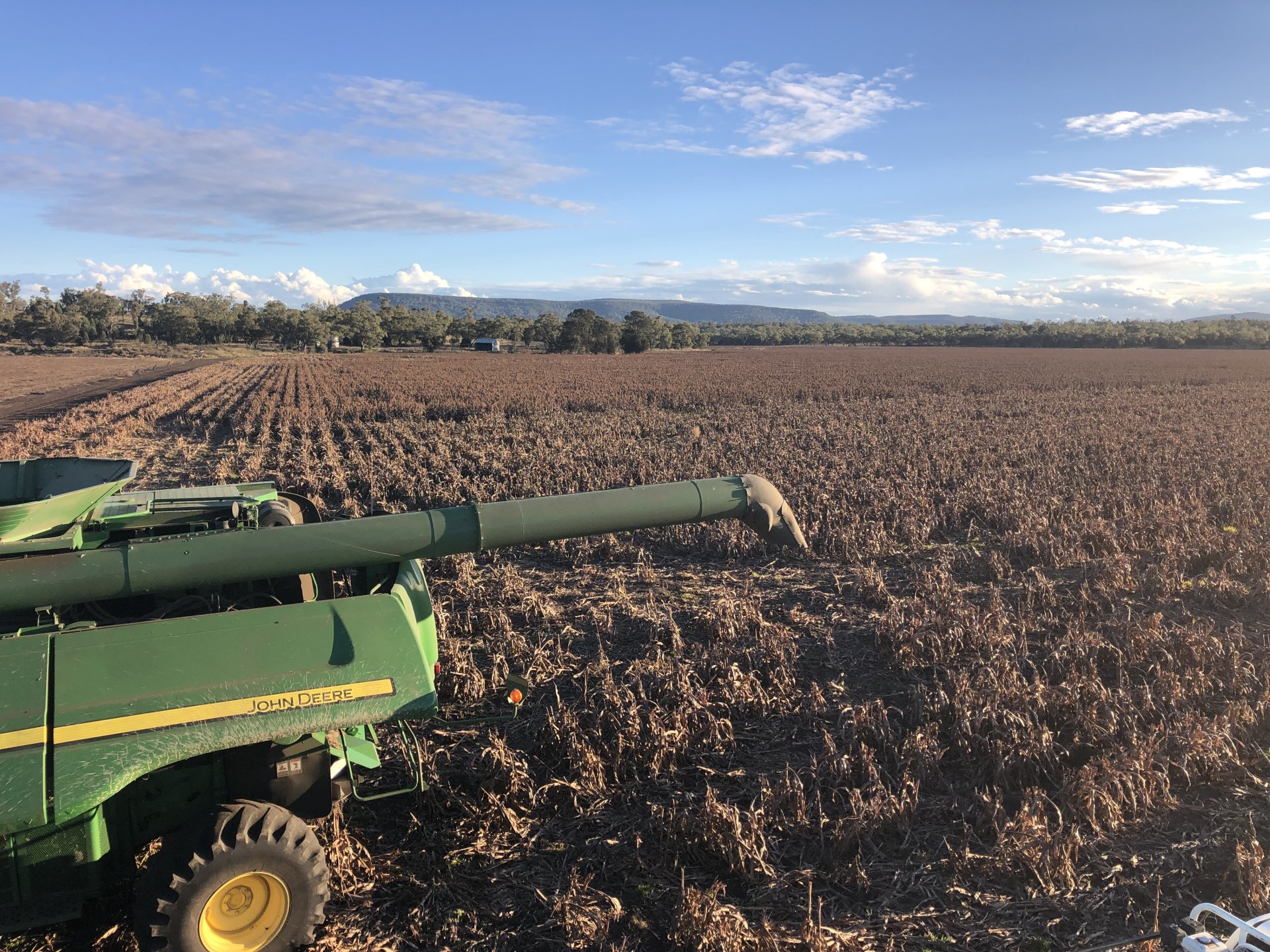 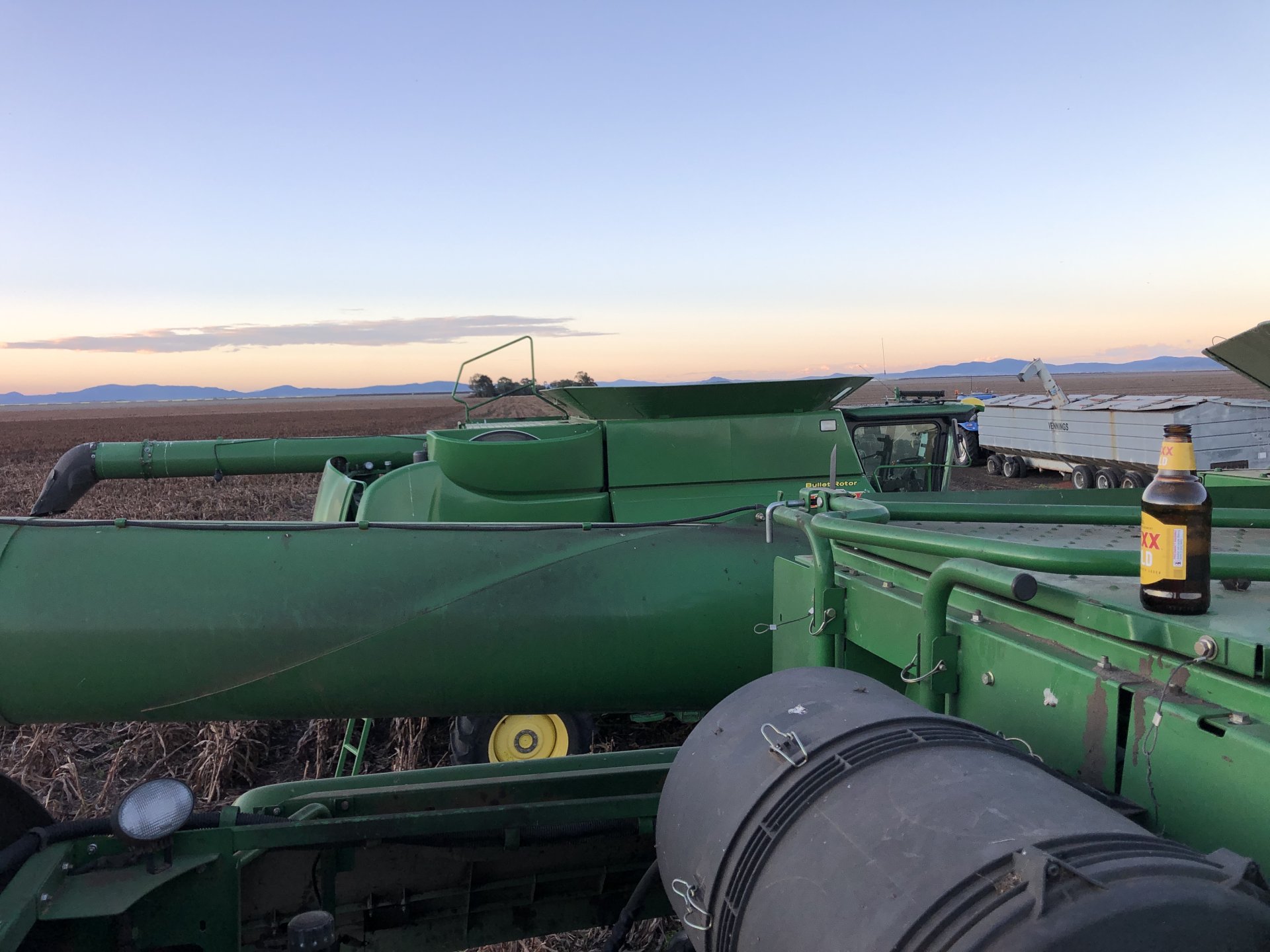 Just a random dead pig next to the track through the sorghum . . . 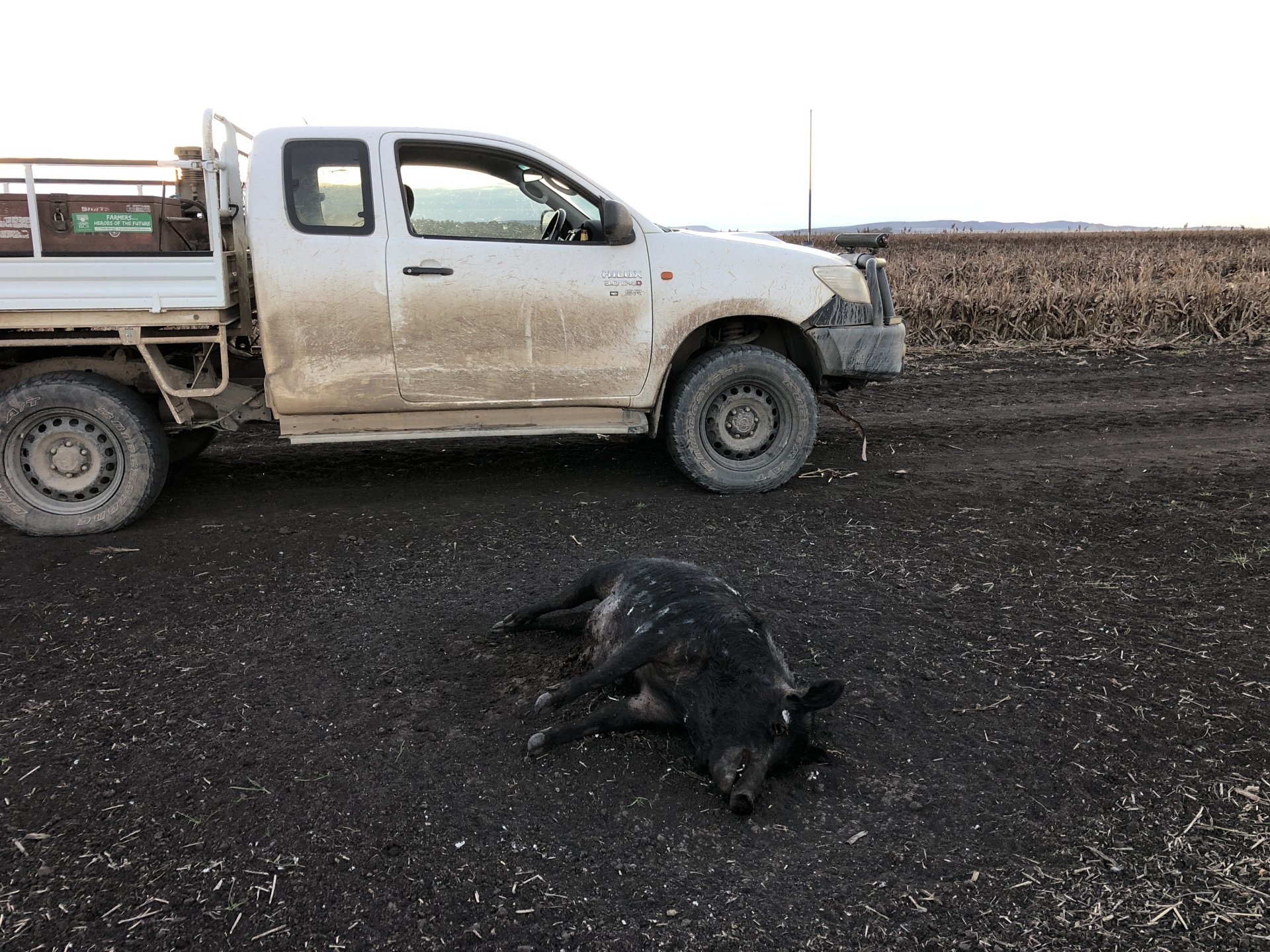 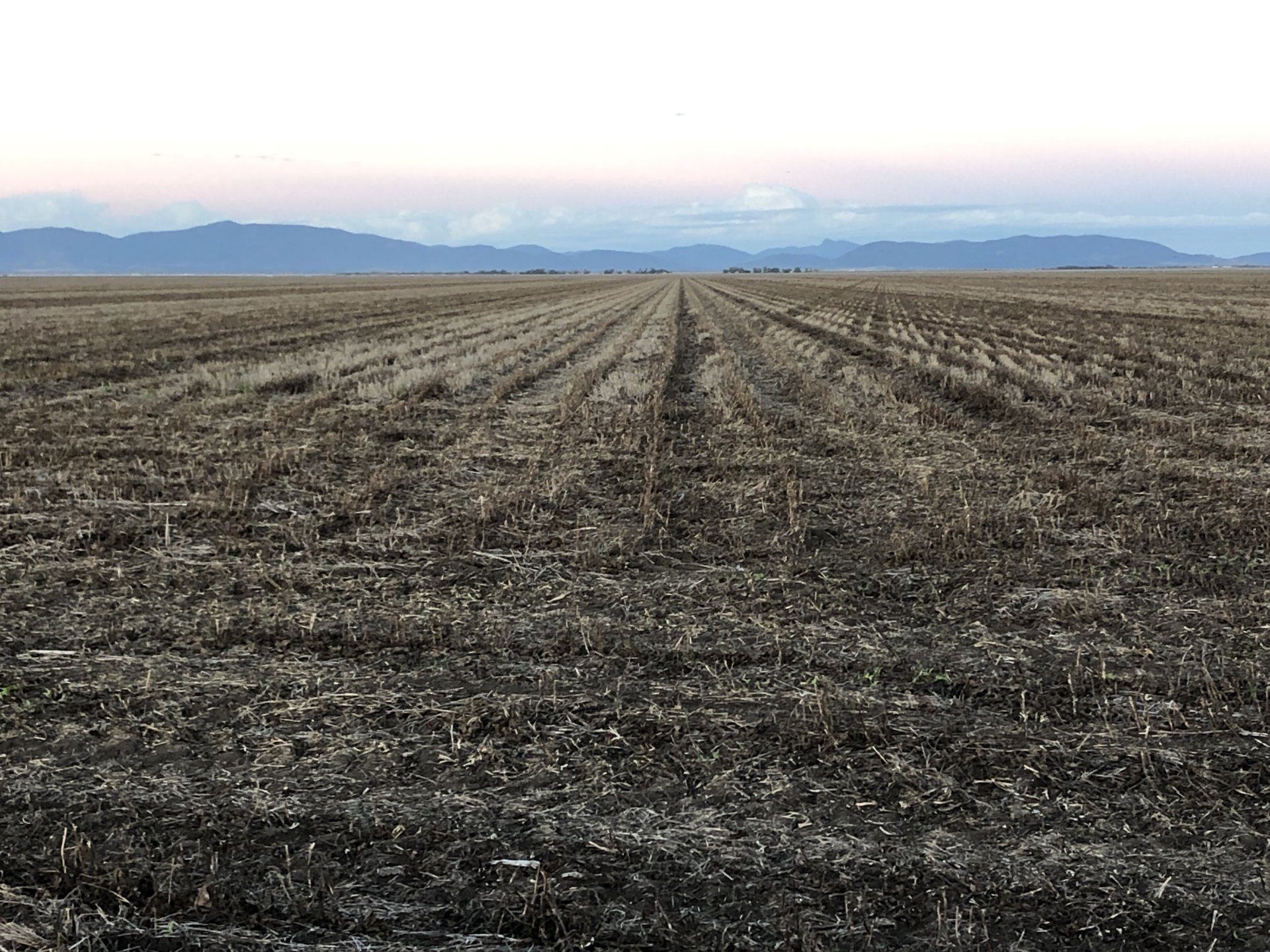 Is harvest late for or is this normal harvest time???
A

johnspeehs said:
Out of curiosity how much do they charge for solid weights ? is it still by the kg?.
Click to expand...

Cost to galvanise or cost to make?
A

Gerbert said:
That is a great idea those weights. I had a pottinger 315 topdry which was far to heavy to comfortably work with. It wrecked the cross shaft on my JD 6610 .
Do you only have the back mower or a front to go with it? I mowed with a frontmower already and ended up taking a gamble and swopping the pottinger for a lely 900 mc and thus going triple. One of the best decisions I made silage wise.
Click to expand...

I've just replaced the cross shaft on my 6810 so wanting to look after it. The twist that those mowers create is massive.

Only the back mower, the hills it has to work on will bring the tractor to its knees, I don't think it would cope with a front mower as well.

Granite Farmer said:
This is what happens when grease nipples aren't fitted by the manufacturer.
View attachment 1038632
Click to expand...

Coincidentally I came upon a press release from vicon boosting about their new tedder having no grease nipples apart from the pto shaft .
How do you like the tedder? I had a stoll for a while which I really liked.

d williams said:
Is harvest late for or is this normal harvest time???
Click to expand...

we normally harvest our “summer” ( warm season ) crops in autumn / winter. ( March - June )
Those mungs were planted in January, after the durum was harvested in December
If we have sufficient moisture, we can literally have 2 crops in a year

we have had a wetter than usual autumn, so yes, our summer crop harvests ( sorghum, cotton, mungbeans etc ) have been delayed a bit this year, but not by a huge amount

AJR75 said:
Cost to galvanise or cost to make?
Click to expand... 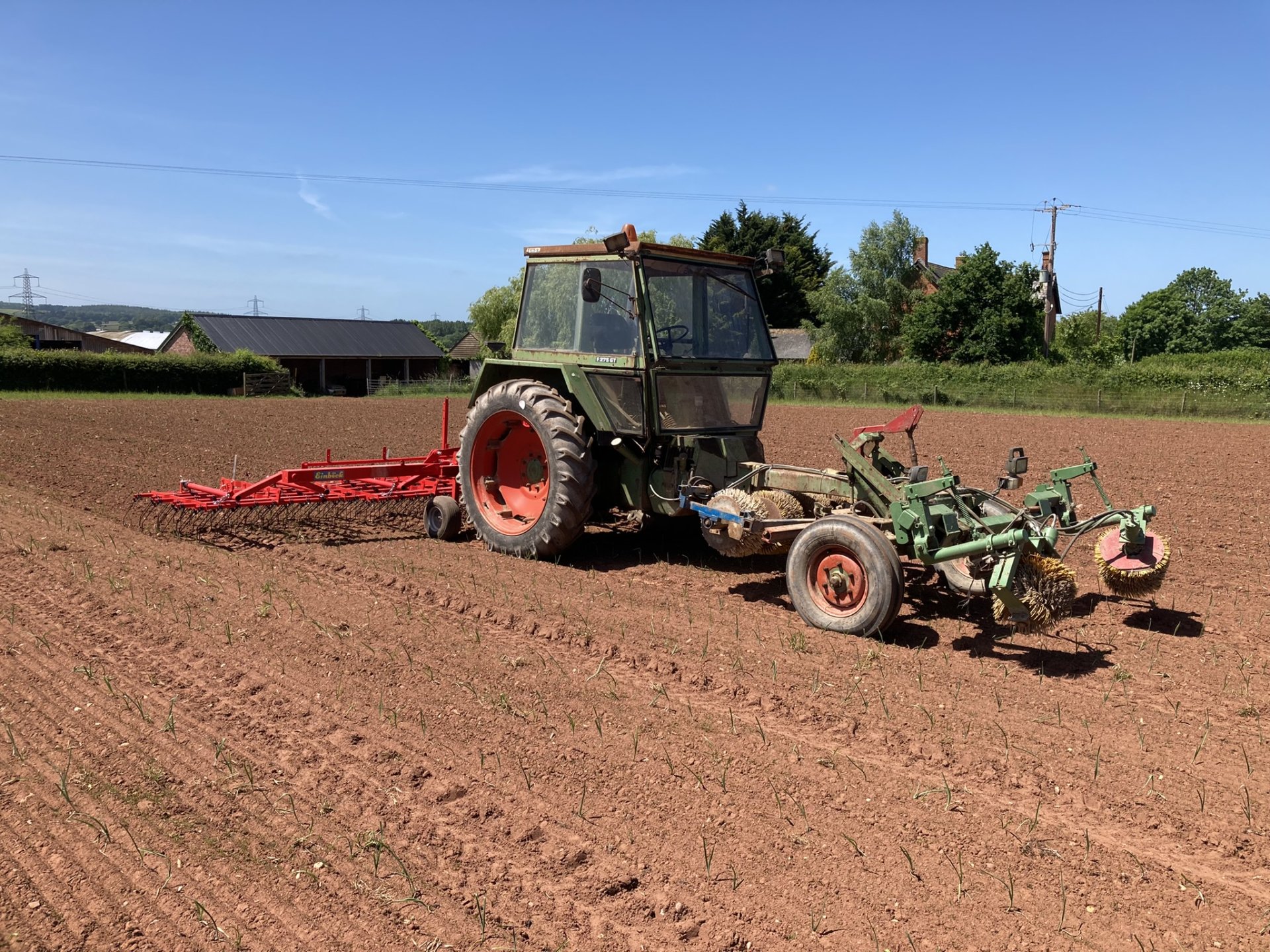 Gradually bringing the old tool carrier out of retirement. Raking small weeds out of leeks here.
Changes this 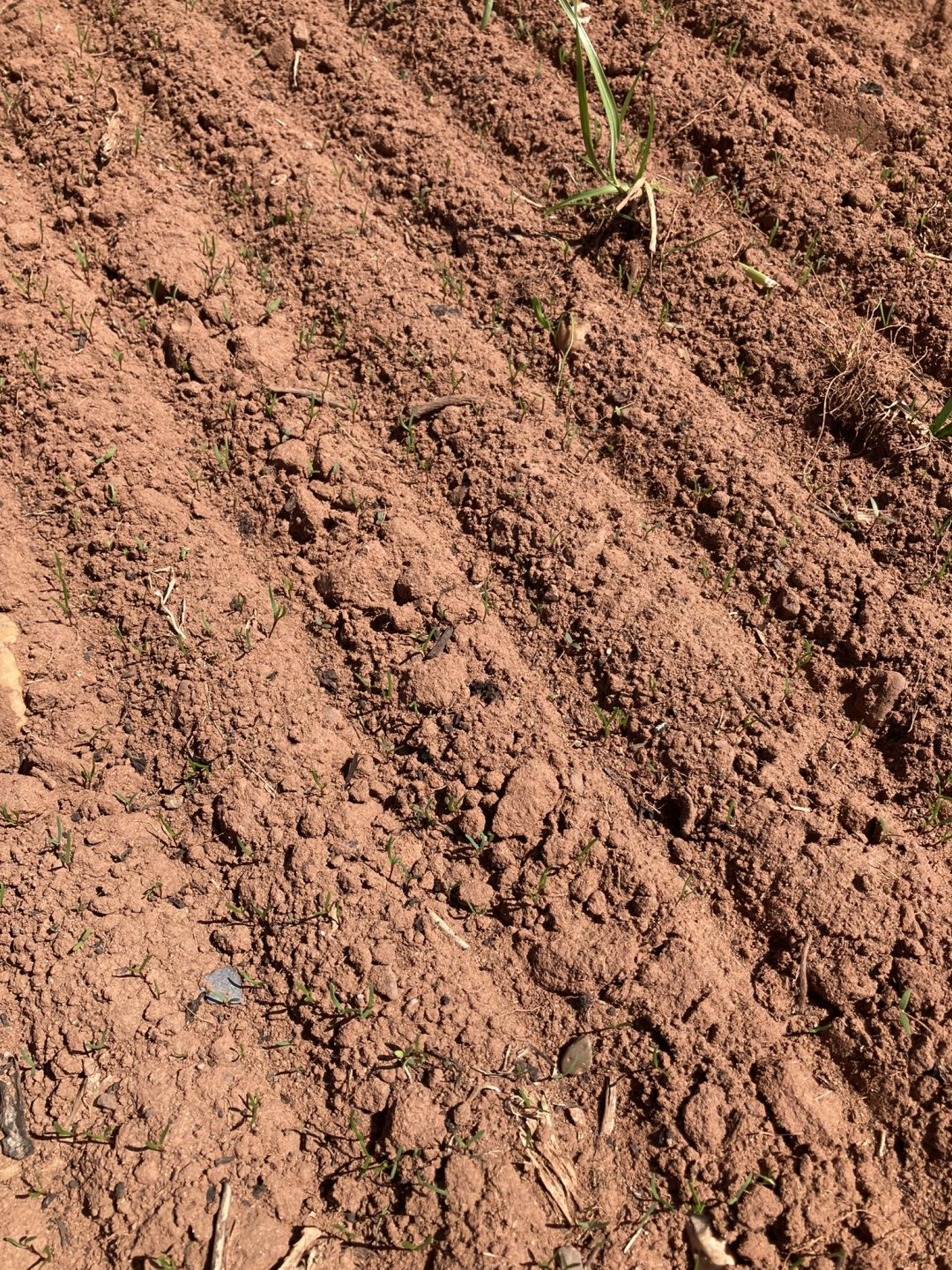 To this, with hardly any damage to the leeks which were planted a week ago 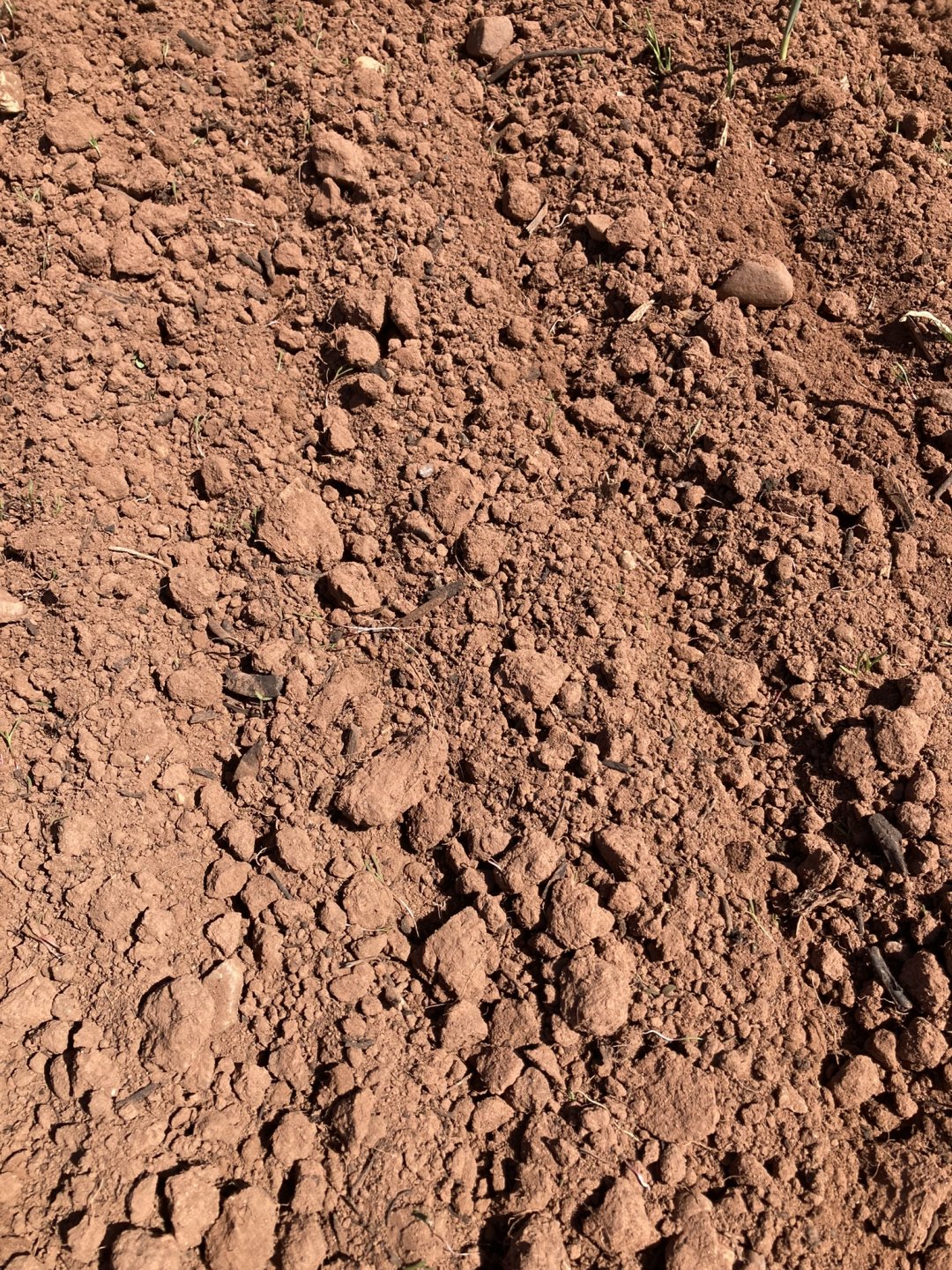 Its that time at the end of the week that we all like to call Friday and to be honest, it's been quite a calm week. . . . well except for the part where my keyboard broke (it can't stand the pace) and I had to use a pen!! With handwriting like mine, I would qualify to be a Doctor!

As I said, it's been a calm sort of week, King Kev and Cool Hand Luke have been putting in the pipework for a new sewage treatment plant at a house a few miles down the road from the office, so nice and local. When Boss Man Chris looked at the job the route to the adjacent brook was not as overgrown as when the lads turned up. Rumour control says that before they hacked their way in, the roar of a rabbit could be heard about 25 feet away! Our intrepid explorers hacked their way through with a 3-tonne excavator and got the pipe in with no animal attacks of any sort, although the dogs of the house were somewhat "excitable" by all accounts! Nice piece of reinstatement, even if I do say so myself. The lads always manage to leave things looking neat and tidy after they are done.

Boss Man Chris and Paul have been "wet spotting" near Hinkley. This job has morphed into something that no one was expecting. Guess that is Oil Seed Rape roots for you! You can see from the photos that they are some right little buggers and do like to be more of a pain than Japanese Knotweed on a village green! During the excavations we found water bubbling up from the side of the trench. The digging at this point was relatively easy compared to a few metres back, which was very hard. We have a theory that our trench is right on the edge of the old quarry that used to be here and the water and air bubbles are being forced up from the old quarry workings? It was as shame we didn’t have 4 free weeks and bigger digger to find out!! Paul is back up there today, the photos he has sent me show that the problem is bigger than anyone imagined! On the plus side, we have found the problem and are chasing it towards the outfall.

With Paul back to site Boss Man Chris has spent today around the yard catching up and generally getting in the way! The new wheels for the low loader trailer we ordered a while back are ready for fitting. Nuts were cracked and trailer moved to Barry Jeffrey Transport ready for these new shiny beasty wheels. Unloading fert for the farm and getting the CAT Challenger in ready for a service. . . much to the delight of DillyBob! The face says it all. Moved some furniture and we even had lunch in the sun! Lunch was very
reminiscent of primary school days when the teacher used to take you outside for lessons if the weather was nice!!

We had a visit from the one and only Chris "Chuckles" Heath on Tuesday when he returned our Moores seed drill he borrowed for a small job. The gang assembled on the car park, hiding amongst the trailers, tractor and pipe. Heads were bowed, hands were thrust in pockets, orange was worn and a couple of them even managed to watch the gladiatorial combat between ground critters going on at their feet. It was a deep and serious conversation that followed.

"Have you sold any corn?" "What sort of price are you looking at?"

"Have your bought your fertiliser?" "What sort of price you looking at?"

Have you bought any new kit or other shiny toys?" What sort of price you looking at?"

DillyBob has been a busy bee this week, and a little quiet. . .The only normal thing has been his professional biscuit snaffling!! The trail of crumbs got so bad at one point on Wednesday and Thursday that we had to call in a road sweeper as the crumbs were creating their own biosphere!

Been a good week lads, as always, thank you for the graft and the giggles, have a dam fine weekend and see you all on Monday to do it all again. 'Till then, stay safe and stay smiley 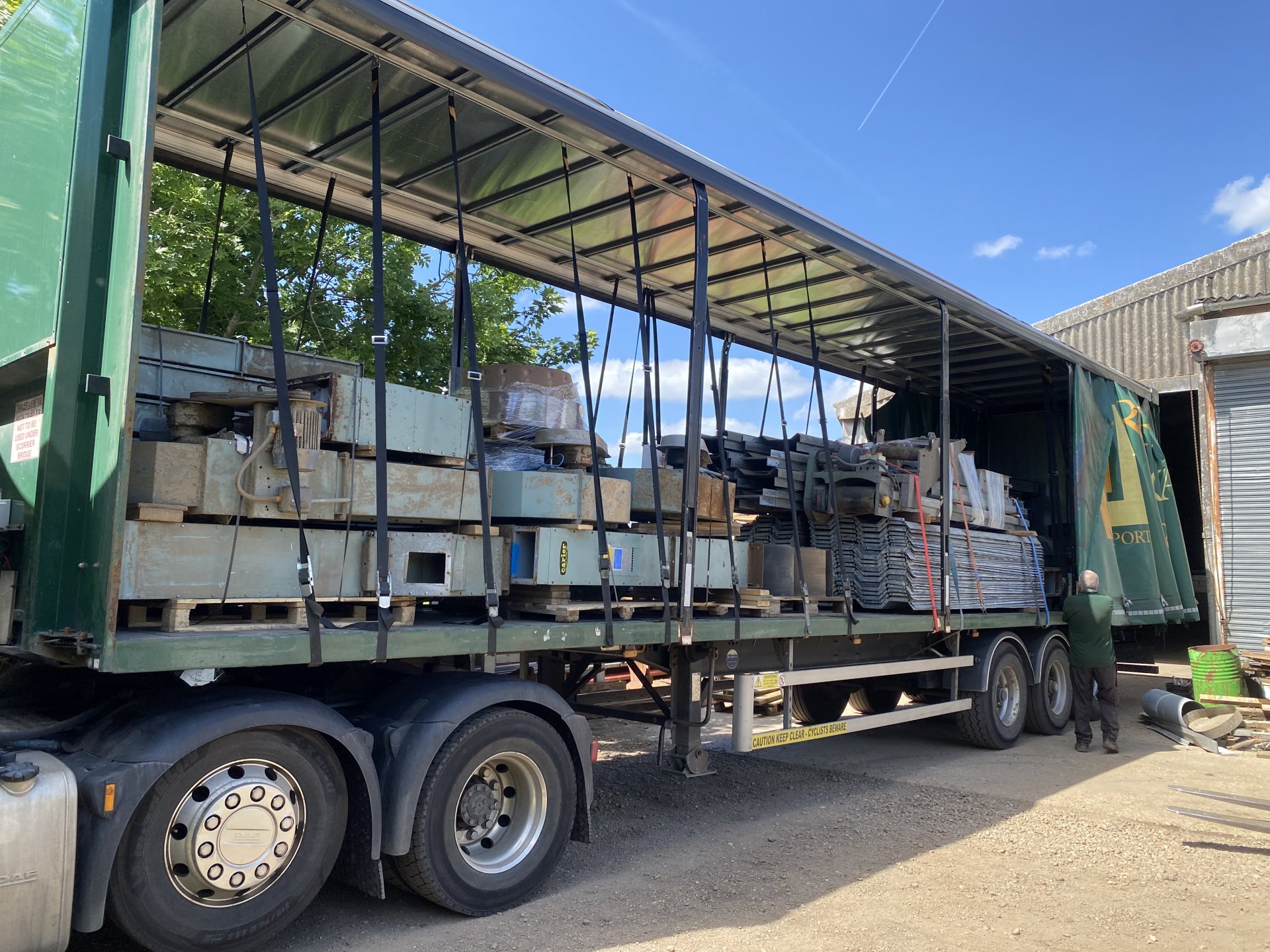 Muddyroads said:
Gradually bringing the old tool carrier out of retirement. Raking small weeds out of leeks here.
Changes this
Click to expand...

Brilliant machines, at the end of my sandwich period I was allowed a week on one of these hoeing spring onions, very satisfying work.

Interesting to see your leeks, we dibbed then watered in early leeks, and banked later to get more white.
H