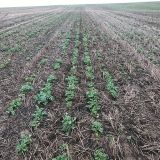 The work at Draughton, a neighbouring site to Agrovista’s Project Lamport, aims to identify effective cultural control options that allow farmers to successfully grow oilseed rape in the UK.

Following the loss of neonicotinoids in oilseed rape, growers have had to switch to limited and often unreliable chemical post-emergence insecticides to establish a healthy crop.

“Applications of seed treatments were varied, including a biological, a cyantraniliprole-based insecticide and a fungicide. We then combined some treatments with different companion plants, which for this we chose berseem clover and buckwheat.

“Finally, for one plot, we added an additional non-Clearfield variety at 50 seeds/m2, with the intention of using an imazamox and metazachlor-based herbicide later in the season, to remove any surviving non-Clearfield plants. And it’s important to remember that no post-emergence insecticides have been applied throughout.”

Following an initial visual assessment, results indicate that using companion plants in conjunction with the biological and insecticide seed treatments could provide growers with a workable solution for flea beetle control.

Niall believes that the berseem clover companion crop is the over-riding positive contributor. He added: “The purpose of this trial isn’t to find one quick fix solution, it’s to show how a combination of factors can work to get a crop of oilseed rape established successfully.

“The roots of the berseem clover help the root exploration potential of the oilseed rape, allowing it to get going quickly and grow away from impending flea beetle damage. It also improves overall soil health and soaks up excess nitrogen, reducing nitrate leeching.

“Supporting this with targeted seed treatments really does seem the way to go, protecting and boosting the oilseed rape seedling from the beginning, when it is most vulnerable to damage.

“For some growers, flea beetle pressure makes growing oilseed rape successfully nigh on impossible. We want to prove that all is not lost and options remain available to make it a financially viable crop.”

Further results for this trial will be available following harvest. For more information, contact [email protected] or visit www.agrovista.co.uk

You can read this update from Agrovista on TFF's AGVendor...