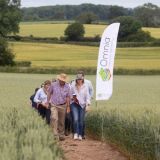 Farm trials provide an excellent test-bed for the latest tools and technology in real-world situations, but often results can be considered in isolation, potentially overlooking the complex interactions across farming systems.

Hutchinsons’ Helix Farm Initiative is different though. Across a network of UK-wide demonstration farms, it is evaluating the latest technology and agronomic techniques, alongside the wider impact on factors such as soil health, farm diversity and carbon, with the objective of helping farmers improve economic and environmental sustainability.

Hutchinsons Helix North project is based at Hundayfield Farm, just outside York, by kind permission of Nick and Liz Wilson.
They are excited about being part of the Helix programme and believe it puts them in the invaluable position of seeing first-hand how technologies are working at a field level that will benefit the wider agricultural industry.

“Technology is all about data – and we are keen to build resolution into our data and how it is processed to improve our decision making. It’s important to recognise that the data isn’t making the decision, but providing information for decision making- there’s a subtle difference between the two,” Nick said.

“We will work closely with our agronomist Sam Hugill of Hutchinsons to do this, as it is not about reacting to every stream of data, but building up a whole picture. It’s not farming by numbers, but garnering the right information for the best decision making possible.”

This June saw the first open day to be hosted at Helix North “With over 170 visitors to the farm over the course of the day, we were delighted with the interest shown in the different approach we are taking with the Helix farms,” says Stuart Hill, Hutchinsons Head of Technology and Innovation and the driving force behind the Helix project.

Stuart welcomed visitors to the site with his overriding message that whilst there is currently much focus on BPS reduction and introduction of ELMs and SFi , in reality, the weather is arguably the biggest single driver of profitability in UK arable farming.

“We only have to look at the last 5 years and see how extended wet, dry, hot or cold periods have impacted on seasons in different ways and has made us more reactive. It makes budgeting, planning, forecasting, timing, applications etc nigh on impossible -or does it?”

“If we have no understanding of past patterns, we can’t then make strategic decisions about the future but we can use data to improve on-farm decision making.”
Stuart pointed out that data is key to building long term resilience on farm and it is where the Helix projects are delivering benefits by developing and validating technology along side agronomic knowledge.

Hutchinsons TerraMap Carbon launched this summer, is the first ever carbon mapping service to provide the most accurate baseline measurement of both organic and active carbon in the soil is one of the technologies trialled and tested at the Helix Northern site.

For Nick and Liz and their agronomist Sam Hugill, carbon is just a part of the whole farm system, but both believe that it is useful to obtain a baseline measurement now, so that they have a baseline figure to work from going forward.

“Now that we have a baseline measurement, we can look not just how we can manage our processes to build carbon on the arable fields up to the levels of that of the pasture, but also to prevent any unnecessary losses of carbon. For example we would be interested to look at the impact of root crops on carbon. We will also use cover cropping to prevent having any bare land over winter and reducing loss this way,” says Sam Hugill.

“The carbon management tool allows us to look at these scenario’s using real and accurate measurements and then quantify the impact on our carbon.”

For the Wilson’s the bottom line is that they are food producers, and managing carbon has to fit into that. ”We always look at what we do and how we can do better and carbon is a part of that – how much we do about it will ultimately be driven by policy – but whatever decisions we make on farm have to be good for us agronomically and economically in the first instance.

“It’s all about adapting what we do rather than radical change- and being able to measure what we have is the first step.”

ICM does not require a drastic change from the norm, in fact many ICM principles have already been taken up over the years due to the positive effect they can have on disease management, was the message from Hutchinsons Head of Integrated Crop Management Dave Howard at the open day.

“ICM is simply a more strategic approach to planning which crops and varieties to grow, assessing where risks lie and then adapting management and inputs in response to changing weather patterns and disease levels – or visualizing risk.”

“However, this can be more complicated than it sounds, for example over the last two years growers have juggled with a spectrum of drilling dates and varieties across the farm, which makes assessing which crops are at higher risk more complicated - and that’s without the extremes of weather to consider throughout the season,” he pointed out.

To make this process much simpler, Hutchinsons has developed a Disease Risk Forecasting model within Omnia which was trialed and developed on the Helix farms.

This model automatically calculates which crops are at the highest risk from disease taking into account all of the factors affecting disease developing in the crop -allowing the user to tailor a fungicide approach accordingly.

“It’s about being better informed to plan a strategy; the job of the model is not to tell us that disease is present, but rather to plan for what disease will be more likely to develop in a particular variety/field etc.”
The model effectively takes into account the data already entered into Omnia , like variety and drilling date alongside the climatological data provided by the Climate tool to provide a visual risk map across the farm illustrating which fields pose higher risks and where that risk is coming from.

As it is generated within Omnia, the risk is recorded though the season to provide a record for justification purposes which is something that is becoming increasingly important.

The weather data within the model is supplied through Omnia’s well established, Climate module, providing extremely accurate current and forecasted weather conditions for locations down to a 1km resolution.

Mr Howard pointed out how useful the Climate module will be in deciding when to drill OSR this summer as it gives a very precise 2-3 day forecast. “We know that the best establishment for OSR is gained by drilling into moisture.”

Mr Howard also shared his smarter approach to crop rotation planning to allow growers develop a more flexible rotation that gives high value crops the greatest chance of success, capitalises on the best performing areas, and identifies where higher-risk land may be better put to other uses.”


Find out more about the Helix Farm initiative, including information about the National, Eastern and Central sites at helixfarm.co.uk


You can read this update from Hutchinsons on TFF's AGVendor...
Click to expand...