Looking for a versatile set up? Our KUHN balers can be coupled with an RW 1810 inline bale wrapper. Offering combination machine output, but with the flexibility to use the machines separately.

For farmer and contractor Mike Hughes, having a baler-wrapper combination with film-binding capability is as much about forage quality as any of the other advantages that this technology offers.
He knows this from his own experience - making around 2,000 round bales for his 80 cow suckler herd - and from feedback from dairy and beef farmers around Haverfordwest where he provides a contracting service.
Mike says: “The initial attraction of film binding is that you avoid using net wrap and no longer have the hassle of separating two materials before disposal or recycling. But for me the real benefit is producing better quality silage.
“We operate a forage based system at home and make all our silage in round bales, so we put a lot of emphasis on getting the job right. I’ve seen no mould on film-bound bales at all, and that’s an indication that bales are totally sealed from the start and no air is getting in at any stage. It stands to reason, as we are effectively wrapping bales in an extra three layers of film, but we’re doing this without adding cost so there really is no downside.”
Mike took delivery of a Kuhn FBP 3135 Balepack in July last year, about half way through his baling season, and has to date done around 4,000 bales with the machine. Although it is possible to use net binding with this machine – as the binding and wrapping functions are independent – he’s been committed to the film binding approach from day one and has found his contracting customers have been happy to accept the change.
“We’ve managed to keep the cost about the same, even though film is a little bit more expensive than net, and that’s possible because of the flexibility that this machine offers,” explains Mike. “Most importantly, with Kuhn’s IntelliWrap system, we have the option of applying as many layers of film as we choose, so four, five, six or seven, for example. The previous machine we had only offered four, six or eight layer options. This means it’s easier to reduce the outer wrap by one layer, to save costs, given that you’ve already applied three layers for binding the bale.
“It’s the customer’s choice, at the end of the day, and it will often depend on how much they value silage quality.” 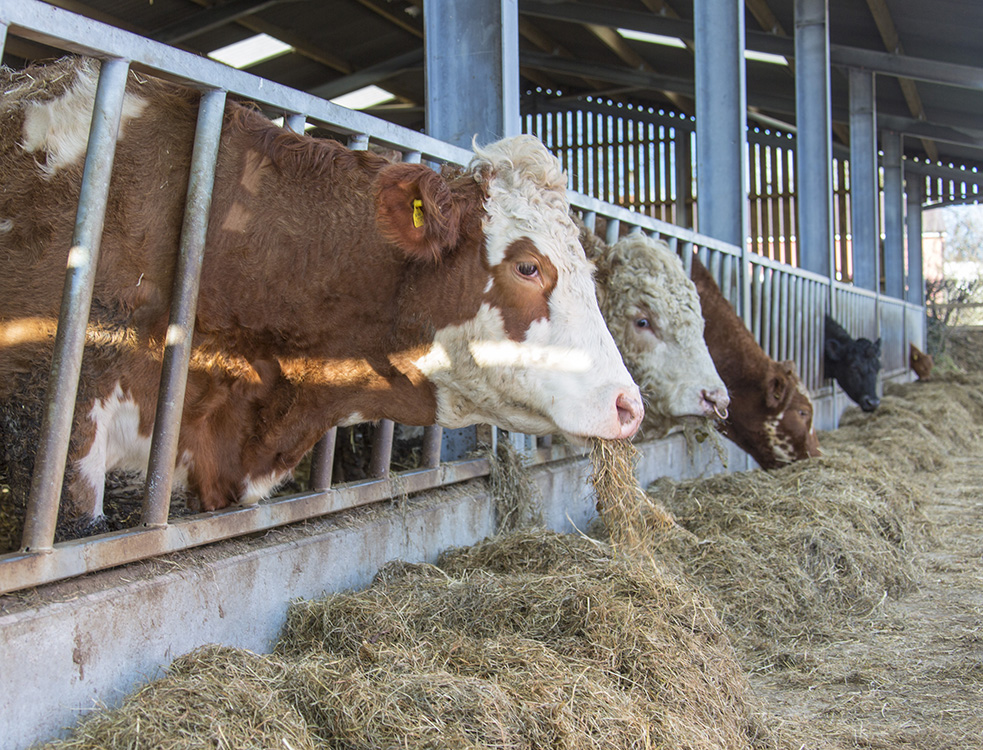 An effective film binding function was the key determining factor in Mike Hughes’ choice of wrapper-baler combination, primarily for reasons of forage quality.

It was the patented film binding technology that really convinced Mike to plump for the Kuhn machine when making the change last year. ‘Machine of the Year’ in the AgriTechnica forage harvesting category in 2018, and a LAMMA Silver Award winner in 2019, the FBP Balepack uses two standard 750mm stretch film rolls to fully encapsulate the bale. As well as improving silage preservation and making the recycling of waste plastic easier, it reduces plastic usage by up to 30% by pre-stretching the wrapping film by 70%, prior to application. Film loading is also quicker and easier as each roll weighs just 27kg, compared to the wider rolls used on other film binding systems which can weigh between 40-90kg. 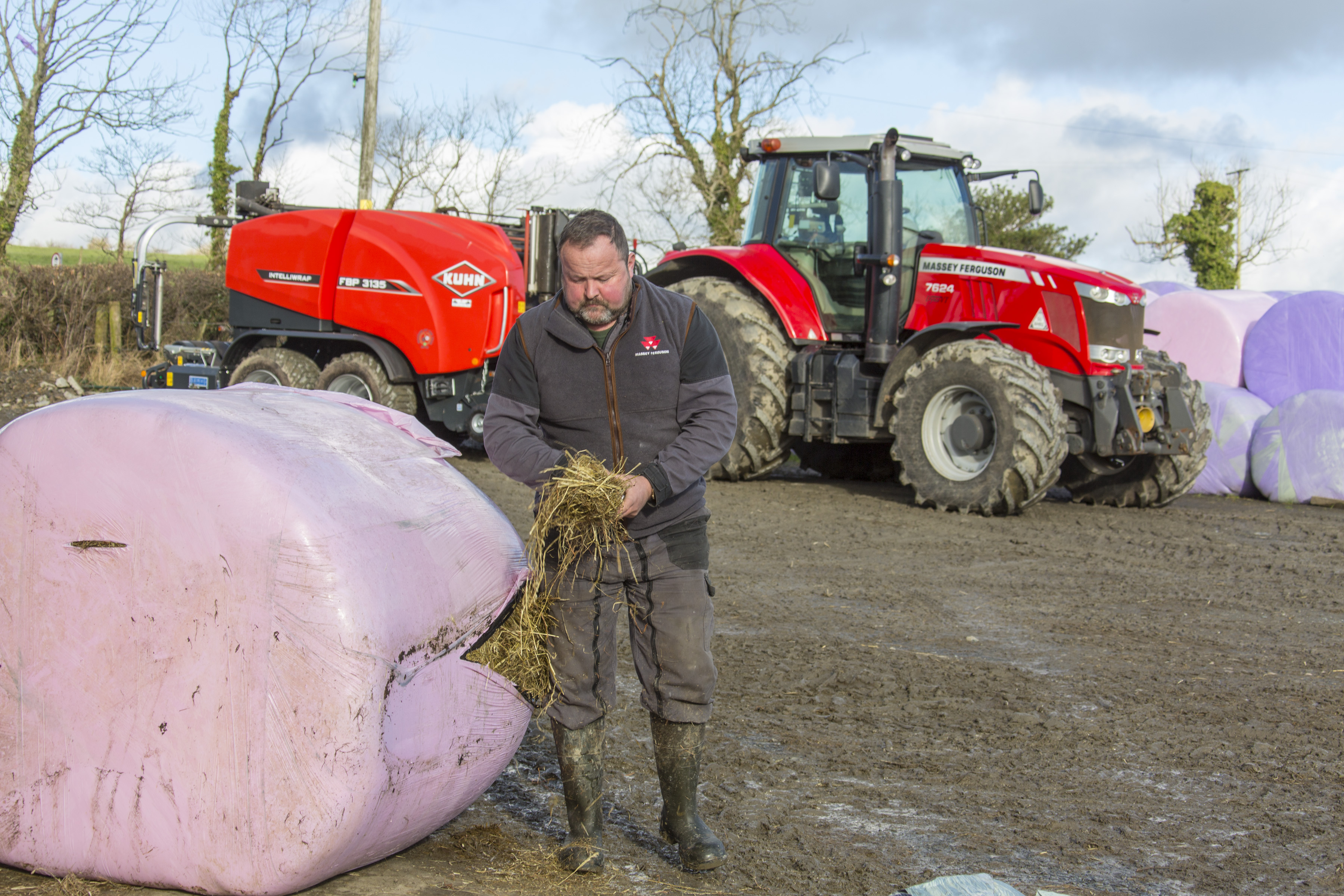 Separating net from wrap prior to recycling is a thing of the past for farmer and contractor Mike Hughes.

As a contractor as well as a farmer, Mike is also interested in speed of operation, not only of the wrapping, but also for the baling part of the operation.
“It’s part of a contractor’s job to be able to cope with different crop conditions and to be in and out as quickly and efficiently as possible,” he adds. “For me the pick-up and feed in to the baler is critical, as I need a machine that can cope with the heaviest of crops and deal with the shorter grass that we are sometimes presented with. So far, we’ve found performance in the field to be problem free, whatever the conditions. That’s mainly down to the rotor auger on the baler intake, which is second to none.”
Customer feedback is important, and Mike is pleased to have had good news back from one farmer who views bale quality as particularly important.
“We work with one dairy farmer where bales made during the summer as part of the grazing management process are then used as supplementary feed for the out-wintered replacement heifers,” explains Mike. “The bales are left out in the field and the wrap is removed as required and the quality has been so good that heifers have actually put on condition this winter. In addition, there’s just the plastic to deal with, and no net to separate, so everyone is happy.”

Grassland Exhibitor
KUHN parts - supporting you through the grass season! 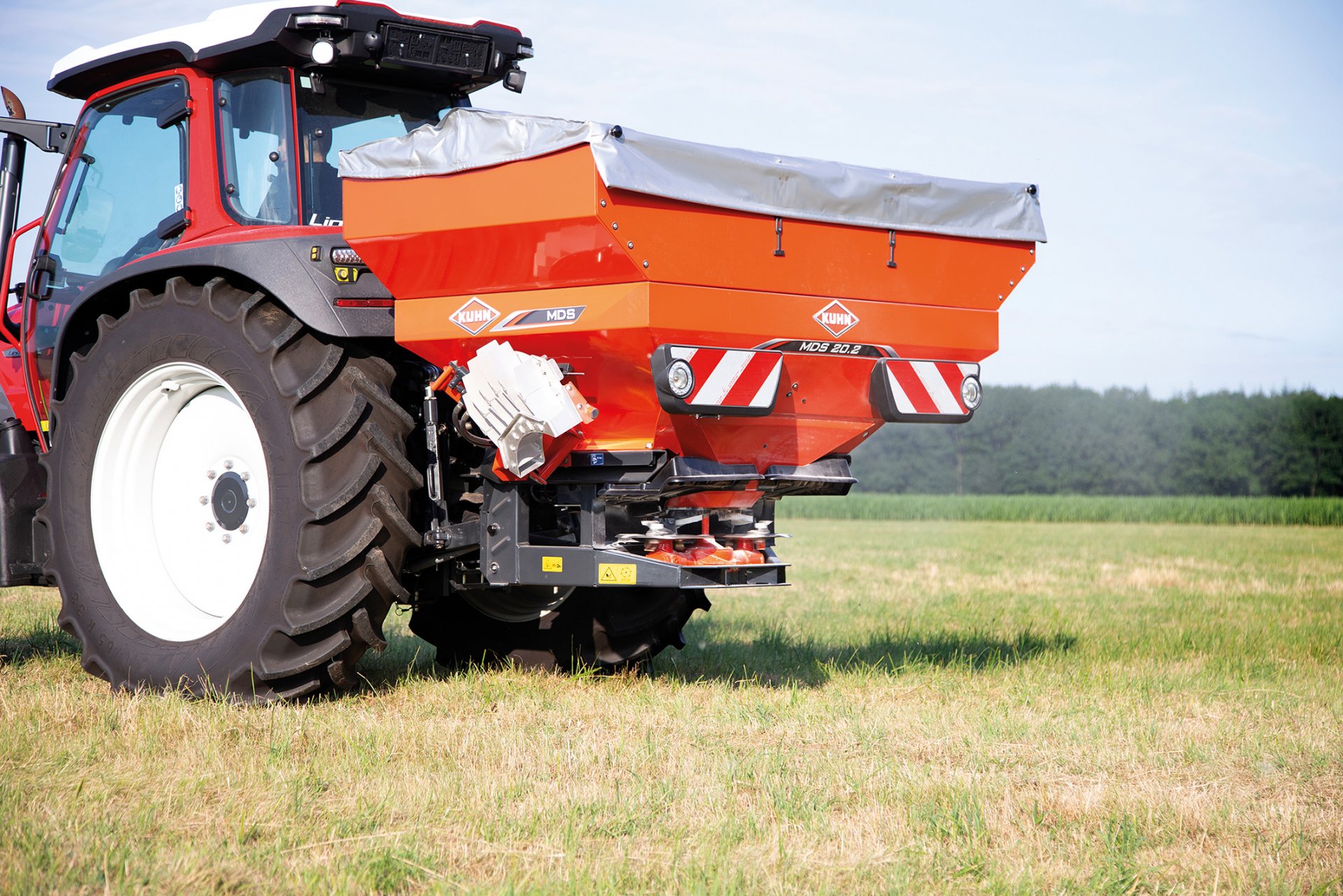 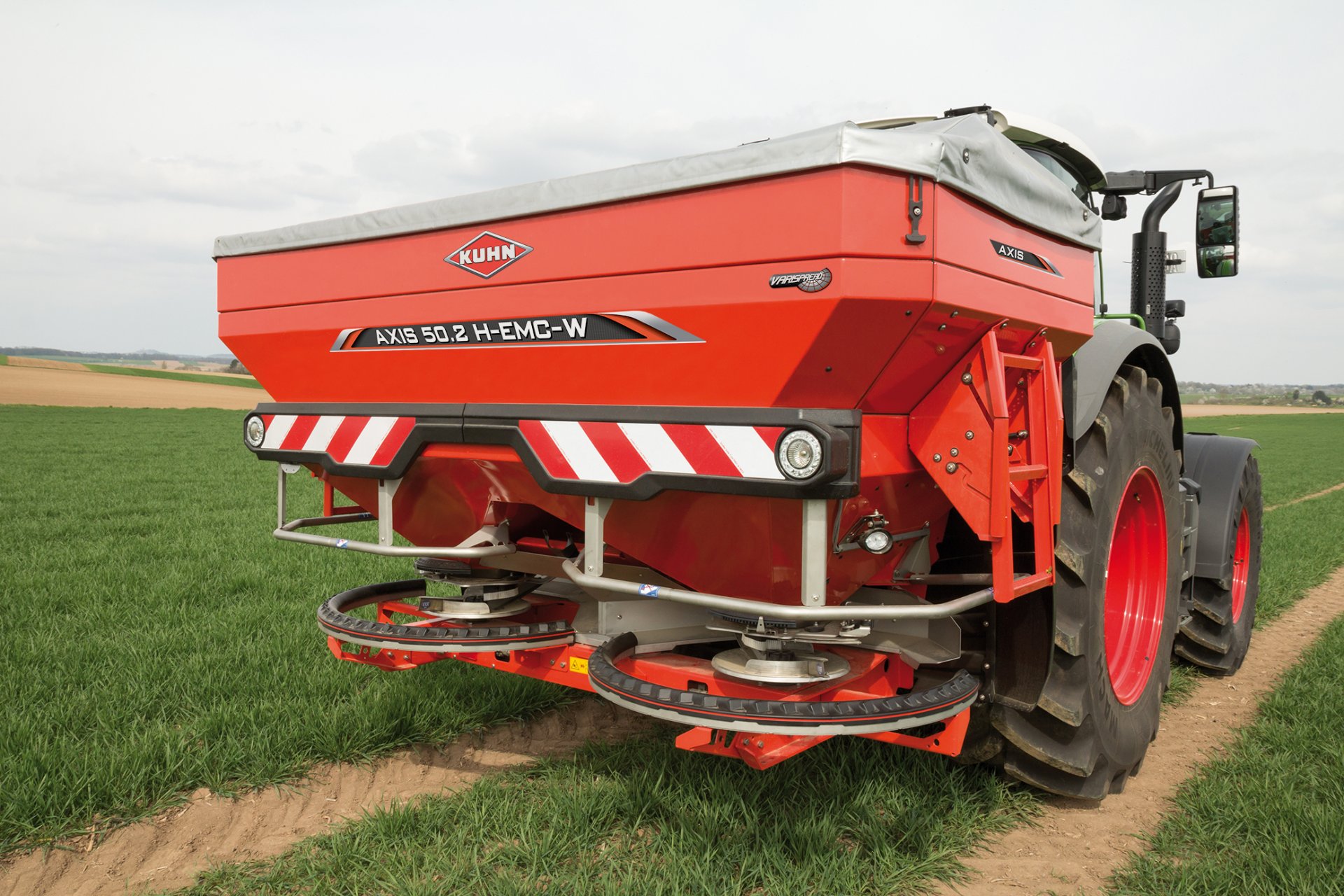 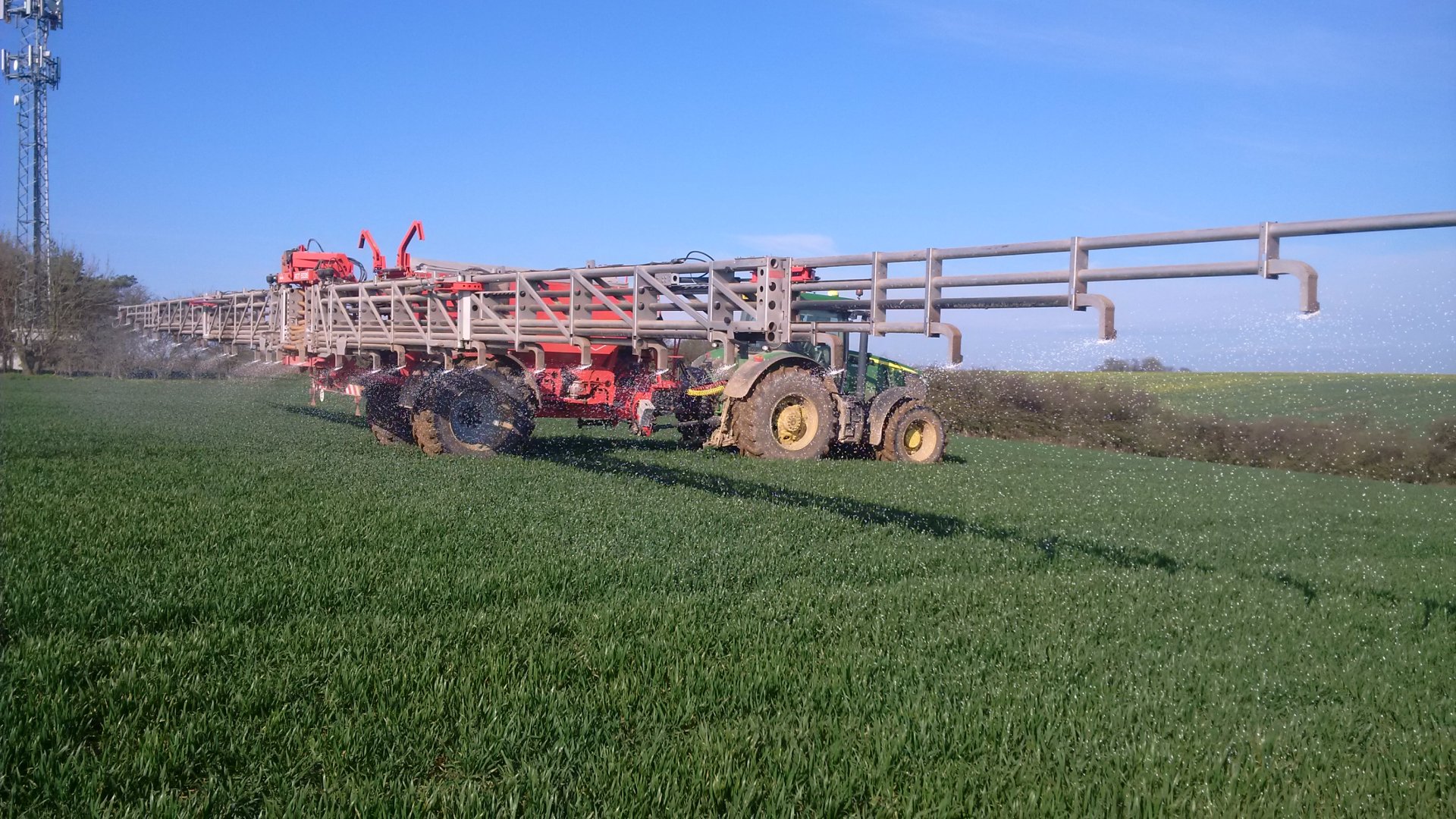 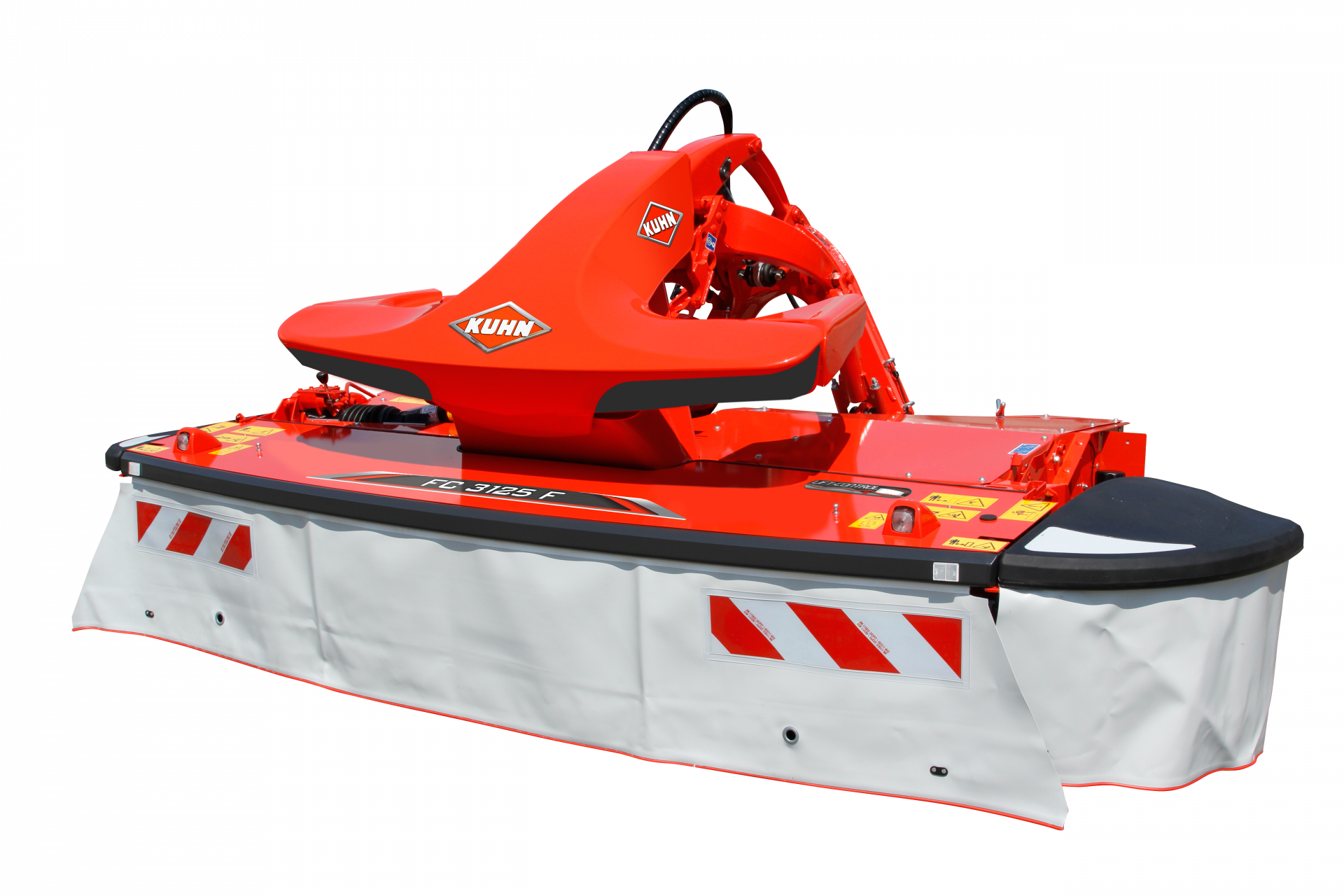 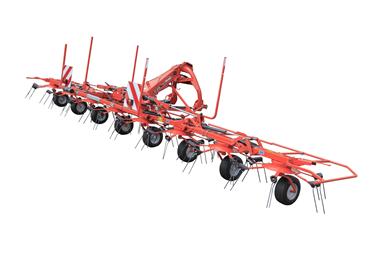 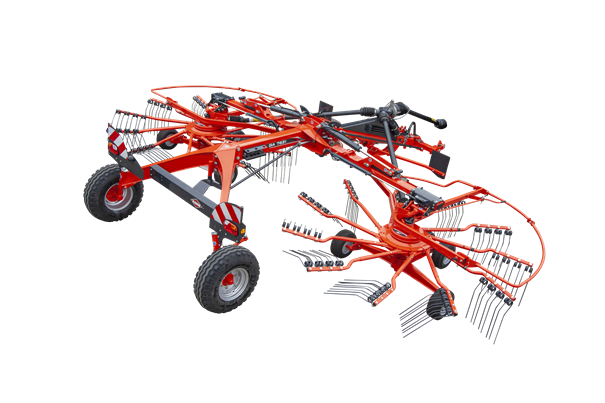 Grassland Exhibitor
Have you checked out our range of diet feeders? 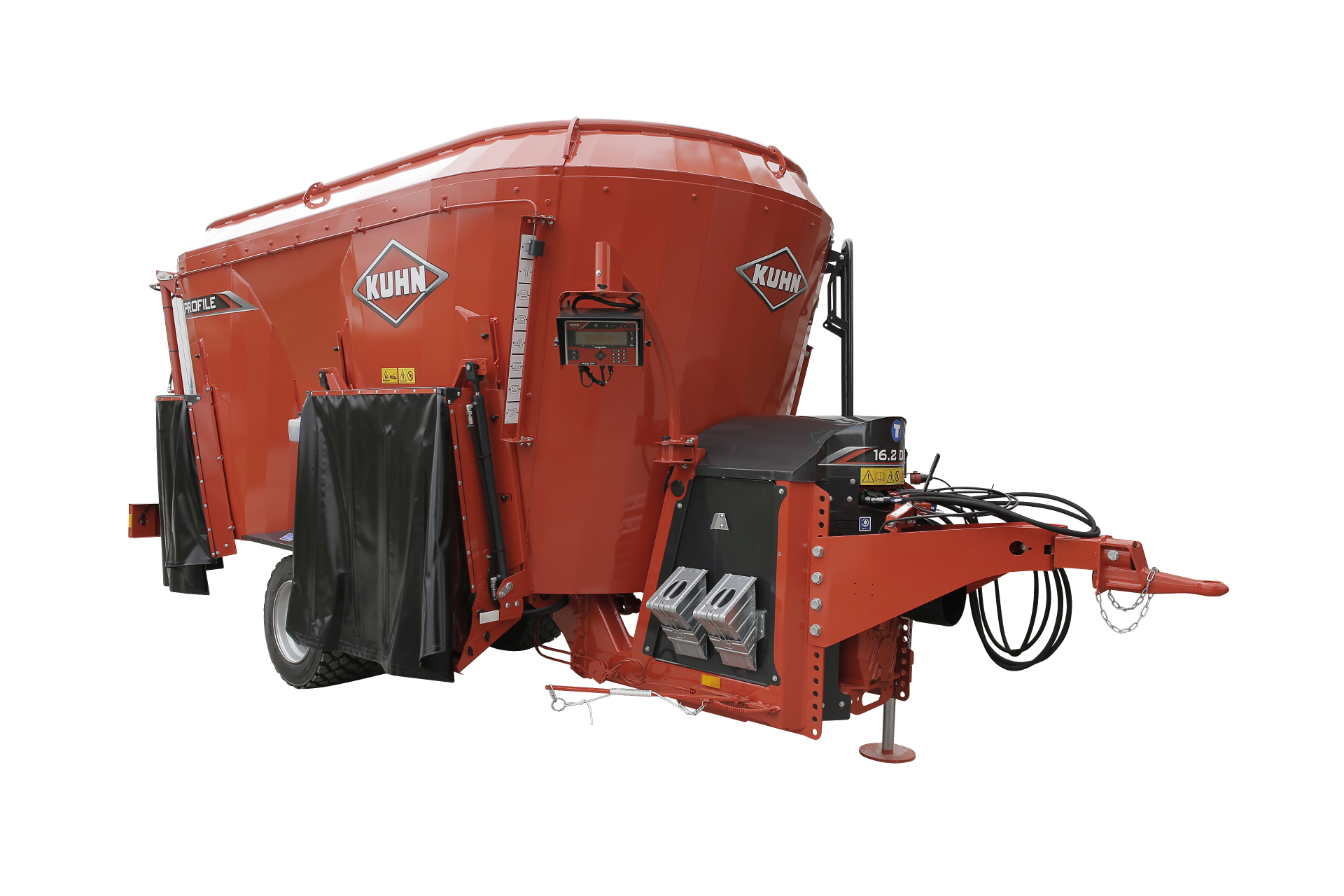 Making full use of straw
Investing in a diet feeder with the capability of chopping and incorporating significant quantities of straw into suckler cow rations is described by Matt Cleland as the most notable change made on his family’s beef unit in the last five years. 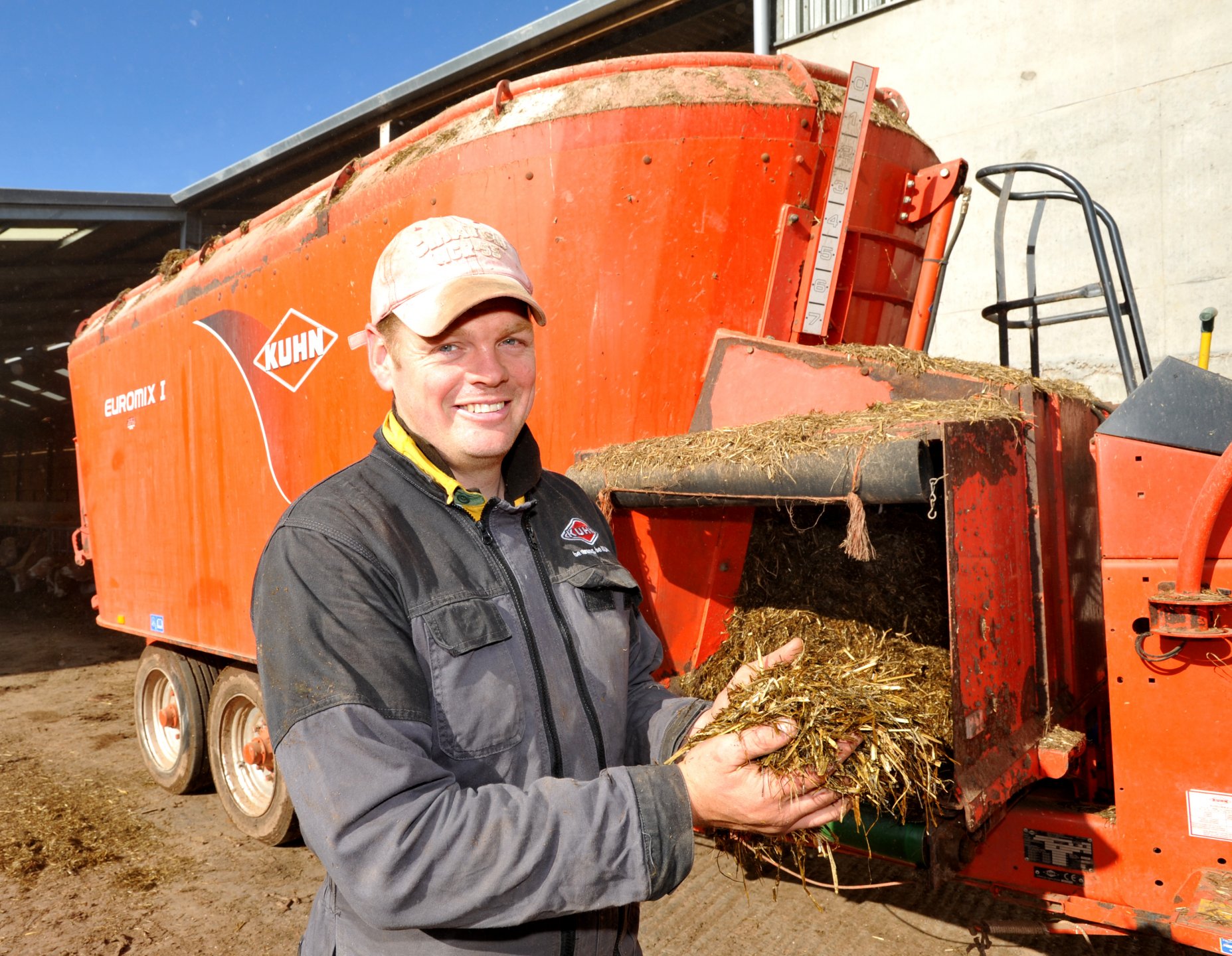 The 340-cow unit, based at Glebe Farm near Holme Lacy, Herefordshire, had traditionally maintained its spring calving suckler herd on grass silage, feeding what Matt describes as ‘scary’ levels of forage.
“Even though the aim with suckler cows is generally to restrict feeding – the opposite to dairy cows – we used to get through an enormous amount of clamped and round bale silage,” he recalls.
The decision to introduce straw was subsequently an easy one, particularly considering the business runs around 182ha (450 acres) of arable alongside the sucklers and therefore has easy access to straw.
Matt adds: “We now include 4.5kg/head/day with the grass silage in the suckler cow’s winter ration. Overall, by looking at the grass acres required per cow, we’ve probably reduced the cost of keeping cows by half. We are also maintaining the cows in more of an optimum condition and have seen fewer calving problems as a result.”
Effective incorporation of straw with grass silage is essential, which is where the Kuhn Euromix 2280 diet feeder plays its part. Bought five years ago, this twin vertical auger machine with a 22 cubic metre capacity hopper will take large square straw bales (125cm x 90cm) and chop and mix these with round bale silage efficiently and effectively.
“We use wheat straw for feeding and aim to chop it down to around three inches,” says Matt. “It takes about 20 minutes to mix a load that will feed 180 – 200 cows. There’s usually enough time to do the bedding down whilst a load is mixing, so the whole operation is pretty efficient.”
With all cattle taken through to finish or reared as replacements for what is a closed herd, the Euromix is kept busy at Glebe Farm for three to four hours a day during the busiest periods. Finishing bulls, steers and heifers are all reared indoors on rations comprising of homegrown rolled wheat and barley, homegrown beans, fodder beet, distiller’s grains and bought-in protein blend. In the past year the unit has finished over 100 bulls at an average 410kg carcass weight, athough the aim is to finish bulls lighter to meet current market specifications. Heifers typically reach 330-360kg dcw in 16-17 months.

Fibre chopping efficiency
Maintaining the diet feeder is a must-do job, according to Matt Cleland, who says the most important aspect is to change the knives in good time.
“We have changed the knives every other season since we’ve had the Euromix,” he says. “If for any reason we are late doing this, we’ll soon be reminded by the extra time it’s taking to chop and mix the rations. It’s not a cheap exercise, but it’s money well spent when you look at the extra time and diesel it takes when the knives are worn.”
Kuhn has designed the Euromix with long fibre chopping as a priority, including a number of features in the design of augers and hopper that enhance chopping and mixing efficiency 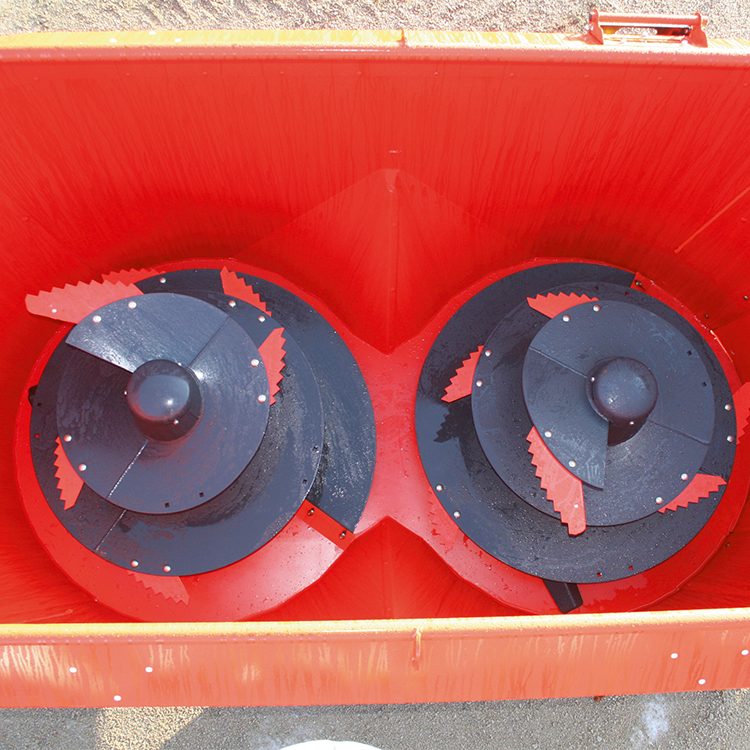 The polygonal shape of the hopper acts as a brake, holding the material for longer to increase the rate of chopping. Details such as the pitch of the auger coils and positions of knives on the auger all contribute to more efficient processing of long fibre.

We'd love to see your kit out and about this season! Add your photo's/video's below ⬇⬇ 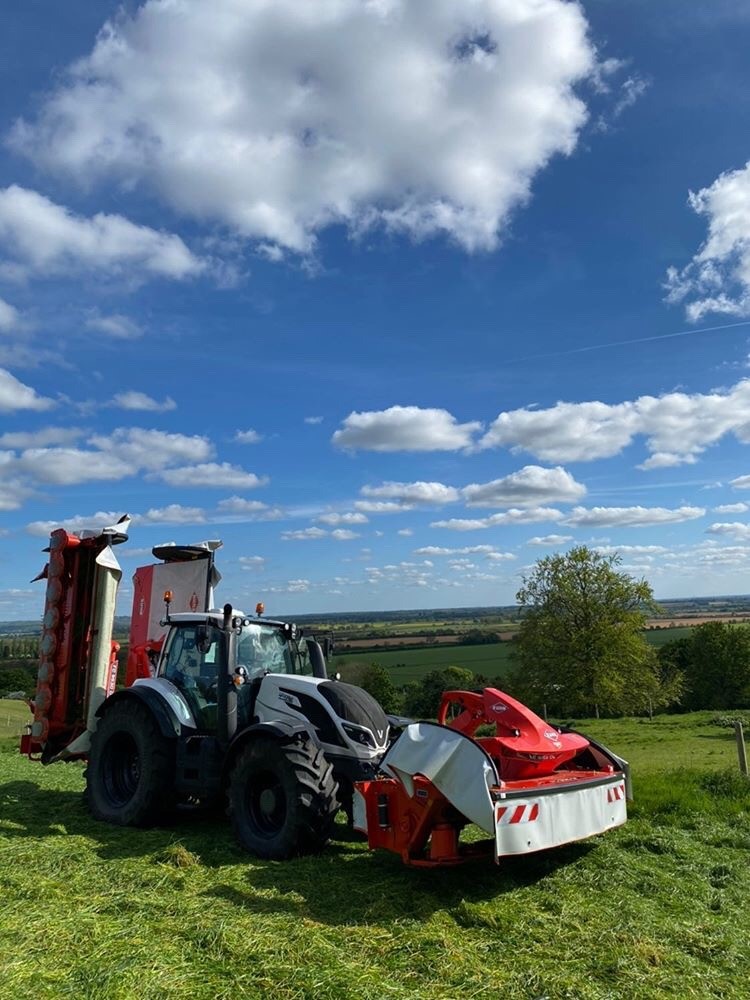 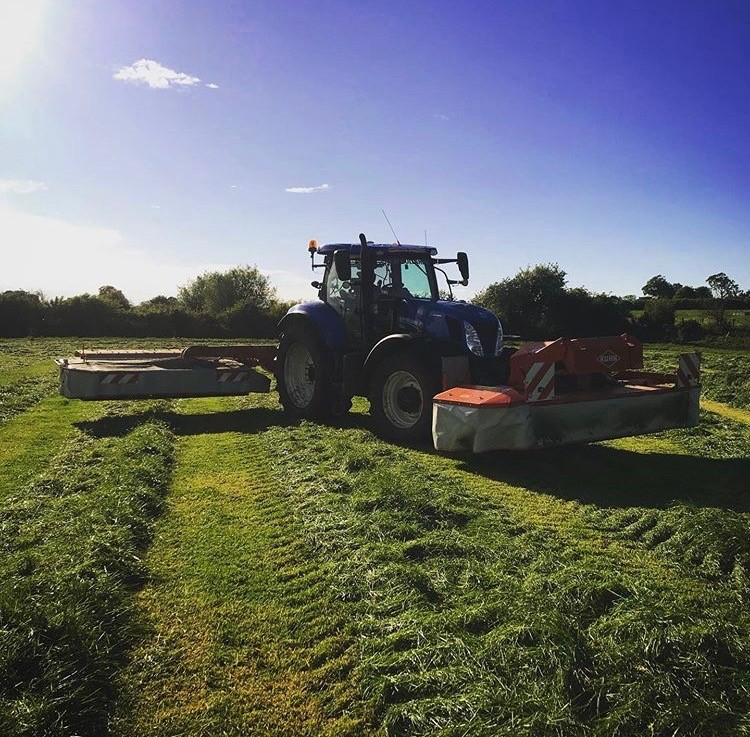 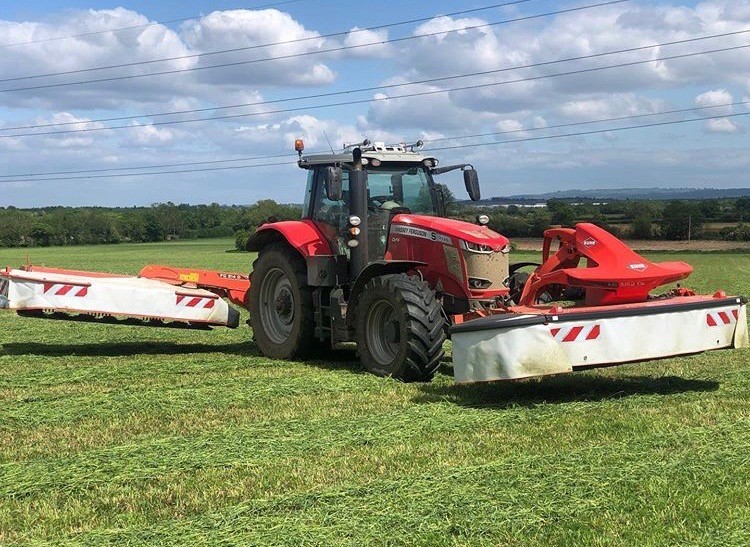 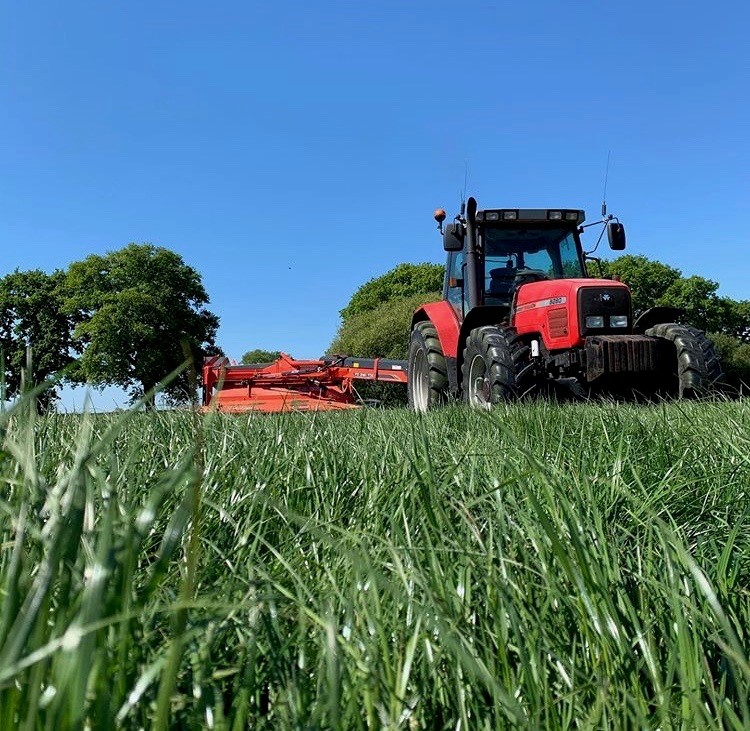 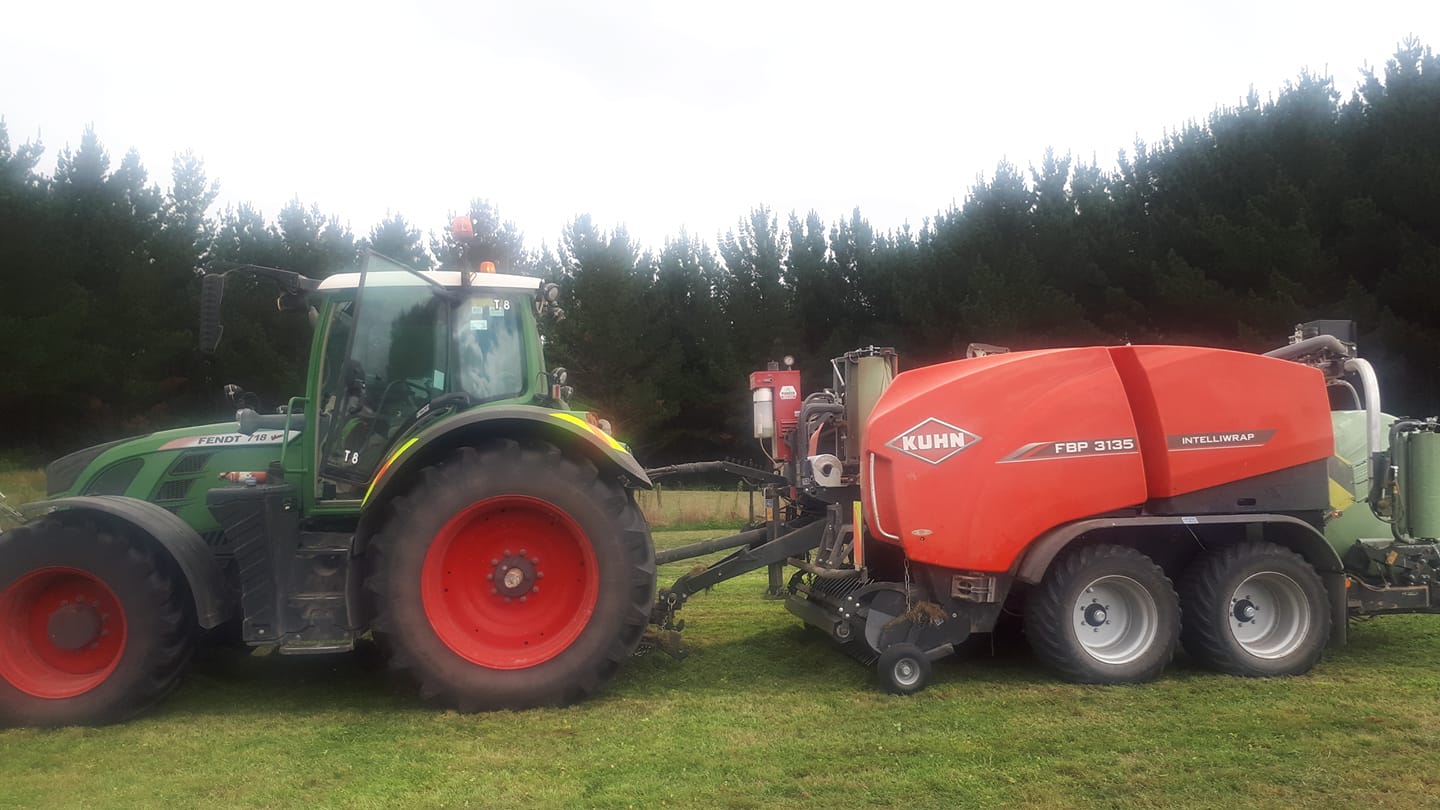 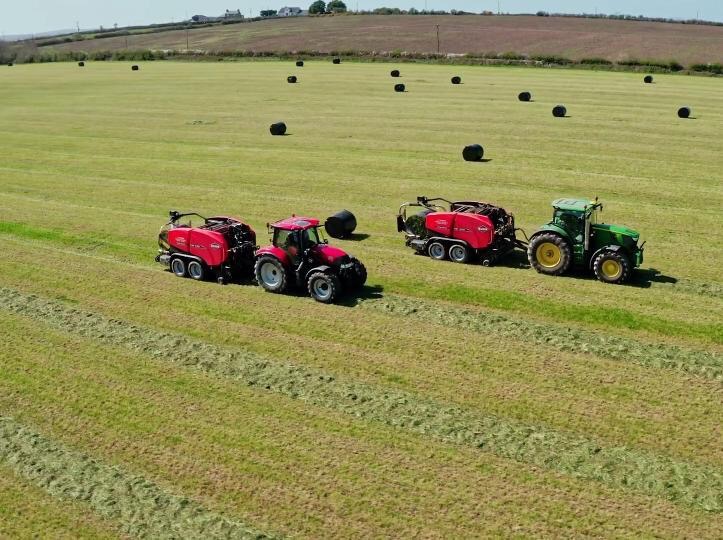 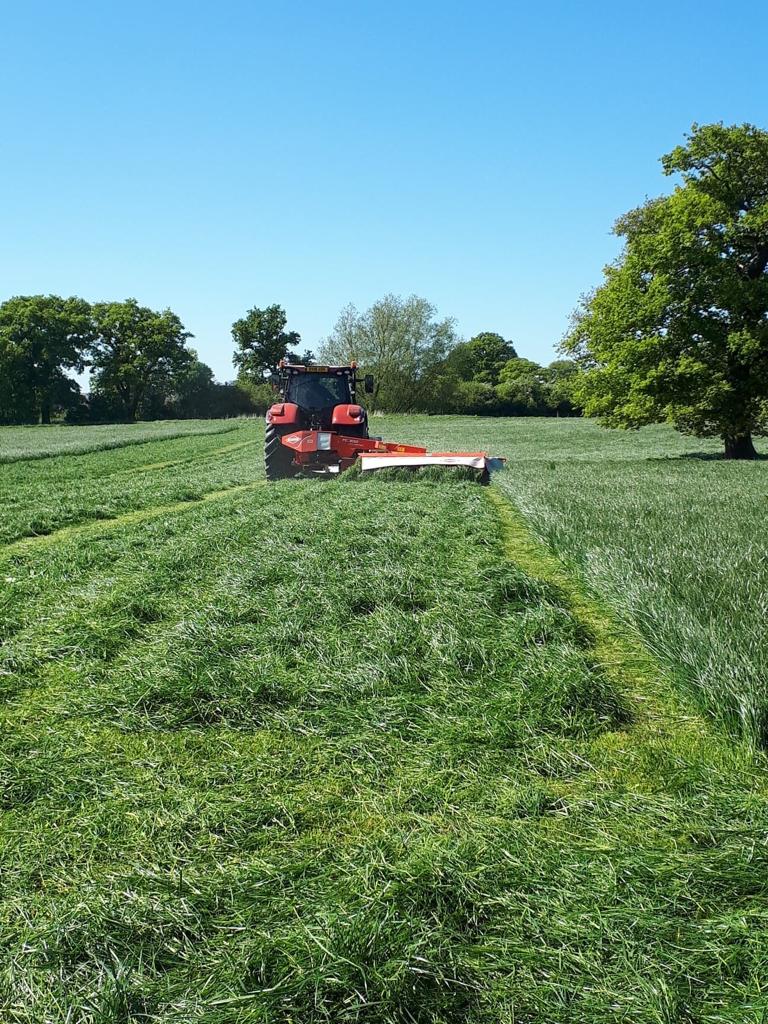 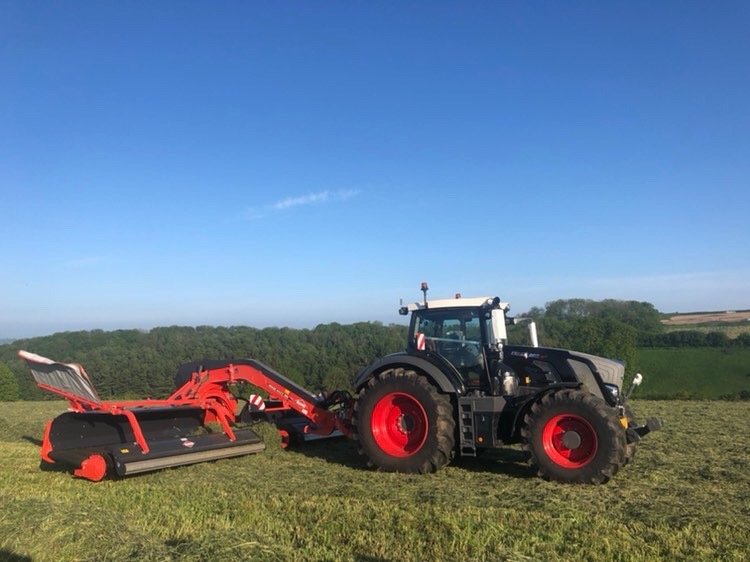 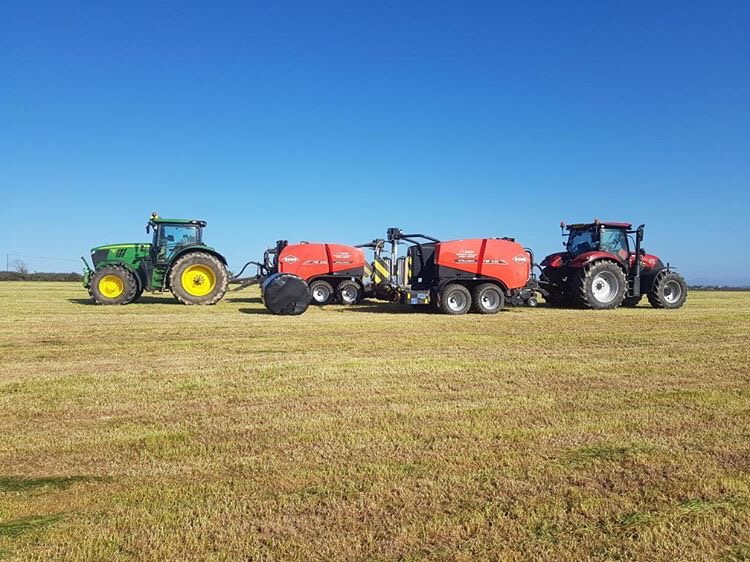 Grassland Exhibitor
Over 190 years of experience in hay and silage making!

We'd love to see your kit out and about this season! Add your photo's/video's below ⬇⬇