It was the desire to get away from planting under plastic that led Pat Kinsella to take a long hard look at the way in which he grew the maize for his beef finishing enterprise in Co. Wicklow. 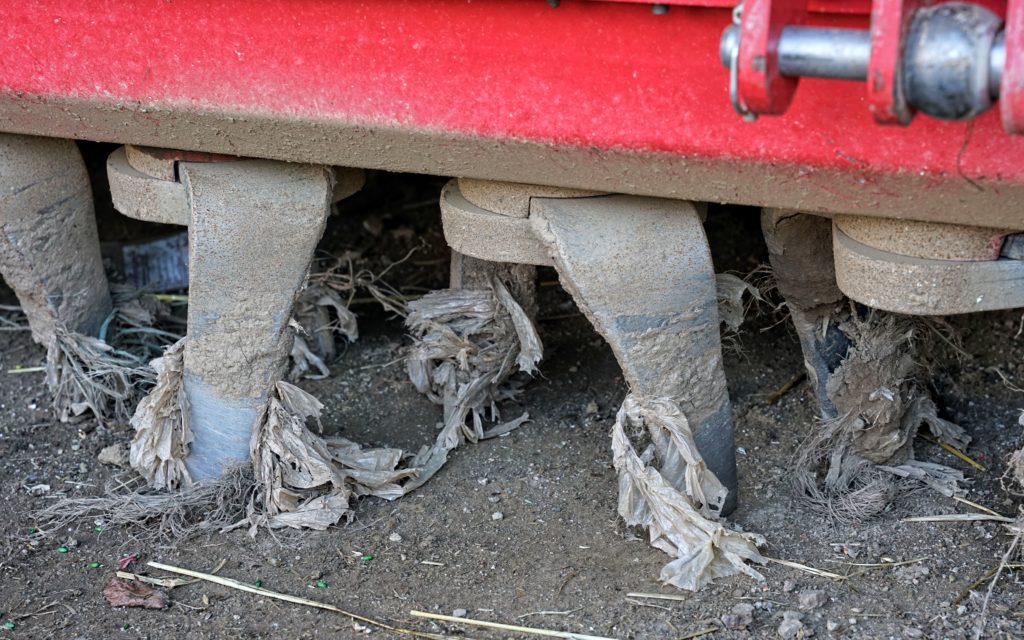 Pat feels strongly about filling his soil with plastic. These fragments came from a field that was planted several years ago

For many years he had followed the tried and trusted method of establishing the crop in this way. However, this season he decided to do without it due, not only to the expense, but also the fact that it just isn’t degrading in the ground as is commonly thought.

“Let’s not kid ourselves, plastic doesn’t rot, it blows away into the ditches,” he said.
Click to expand...

In addition to the problems with the plastic itself, he also felt constrained by the lack of choice of varieties imposed by the system.

Breaking away has opened up a whole new vista of possibilities when it comes to selecting a type that might be more suitable for Irish conditions he feels. Check out the video below to see the substantial crop.

Pat is a great enthusiast for thinking outside of the box and the rapidity with which he has grown and developed the farm over the years suggests that sticking with convention is not always the best way forward. 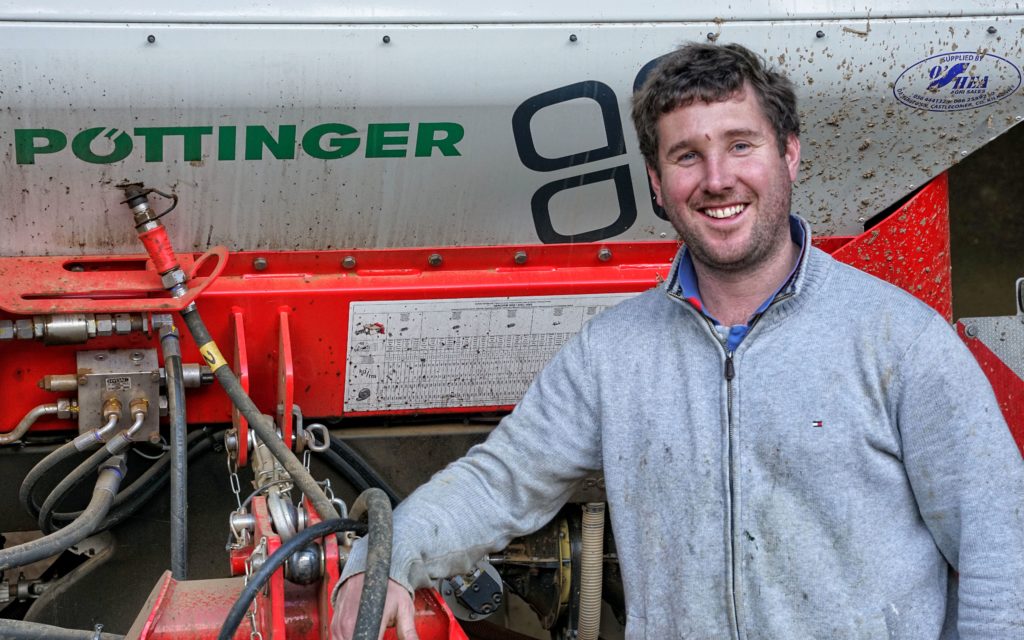 In casting around for an alternative to plastic, he fell upon the Pottinger Aerosem drill.

There were two major features of this range of drills which attracted Pat’s attention. The first is that they are multipurpose, capable of drilling maize, cereals and catch crops, while the second was that it could plant maize in a novel pattern. 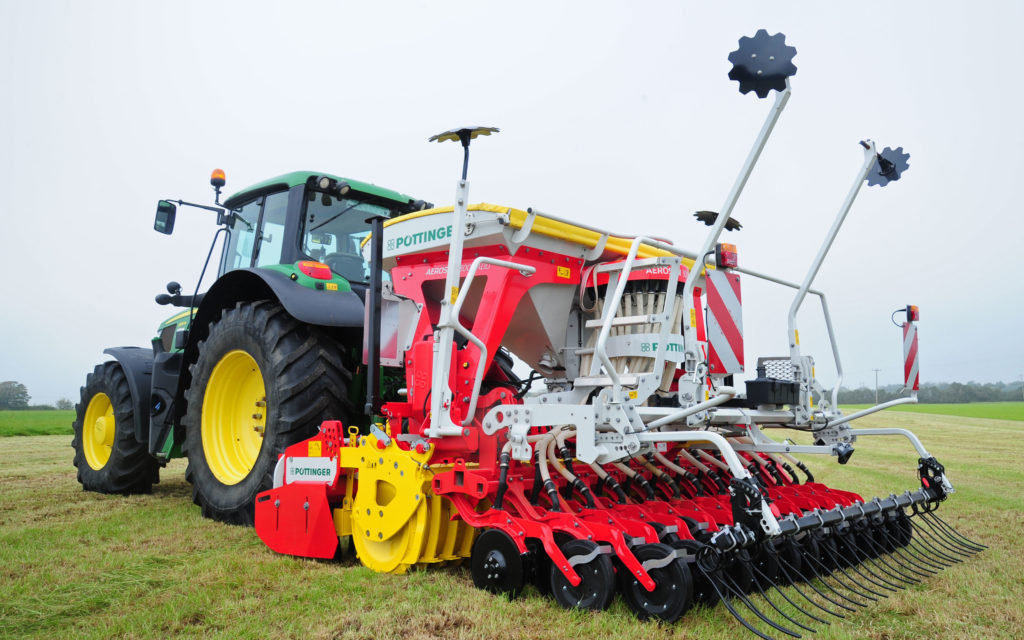 The Pottinger Aerosem drill was chosen for its versatility

Pottinger itself refers to this as its ‘Duplex System’, the idea being to split a single row of seeds into two by offsetting each seed by 12.5cm from the previous one.

The centre lines of each split row are still 75cm apart to accommodate standard maize headers on harvesters.

The company lists many benefits of the system all backed up by university research that found an average increase in yield of 5.5% over conventionally sown crops.

The primary reasons for this increase include the greater availability of light, water and nutrients to the plants, which have more space in which to grow their roots and develop the leaf canopy. 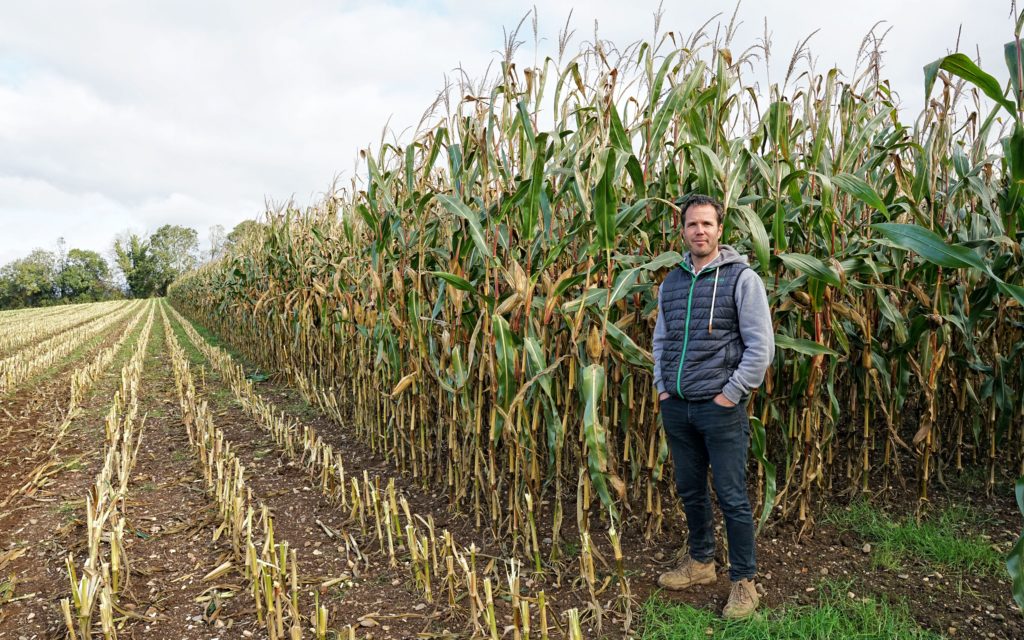 Paul Wilson of Pottinger is 6ft tall and crop towers above him. The twin stalks of each row can be clearly seen

This latter is an important factor in suppressing weeds and encouraging photosynthesis, and it is photosynthesis that captures solar energy and stores it for later use by livestock.

The farming model developed by Pat is based on getting as much feed into high performing Charolais bulls as possible.

He aims to finish the animals at around 15-18 months with daily live weight gains of 2kg being achieved with the right animals.

He employs no staff and works the farm entirely by himself with the major tasks being undertaken by contractors.

However, he still does all his own drilling and relies upon a variety of crops, including wheat, beet and grass in addition to the maize, to keep the ground covered and producing feed throughout the year. 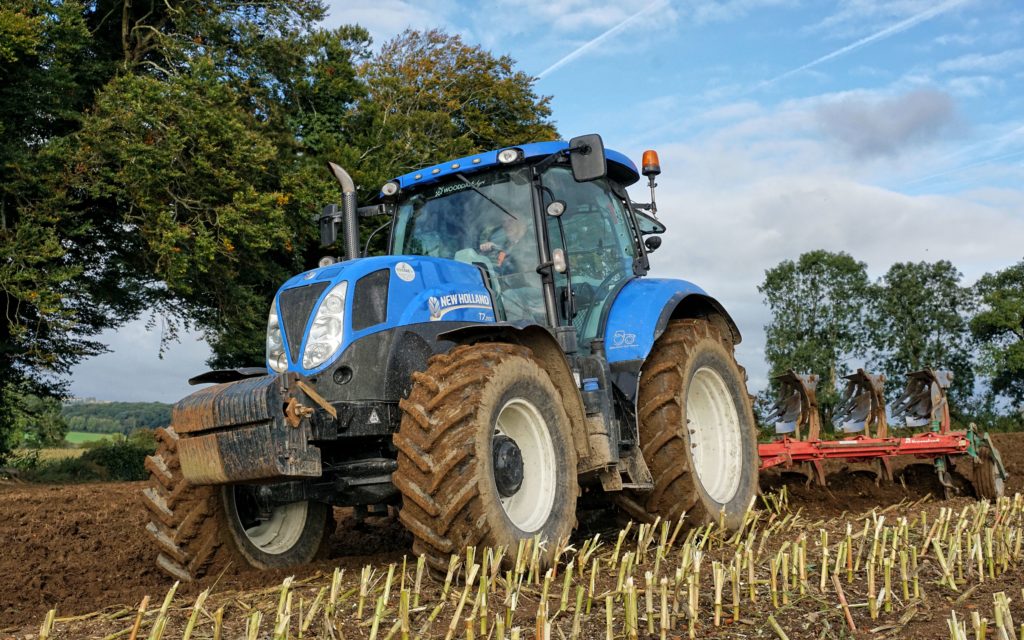 The ability to sow all the crops with just one drill is a huge bonus and coupled with a power harrow that can prepare either stubble or cultivated ground for sowing, he has a planting system that covers most situations.

There is also a very significant cost saving. Pat calculates on saving around €24,000 by drilling the maize with the Aerosem rather than paying a contractor to do so under plastic.

This is on top of the savings made by having a multipupose drill which is immediately available on the farm to sow any of the crops used, when the conditions are right. 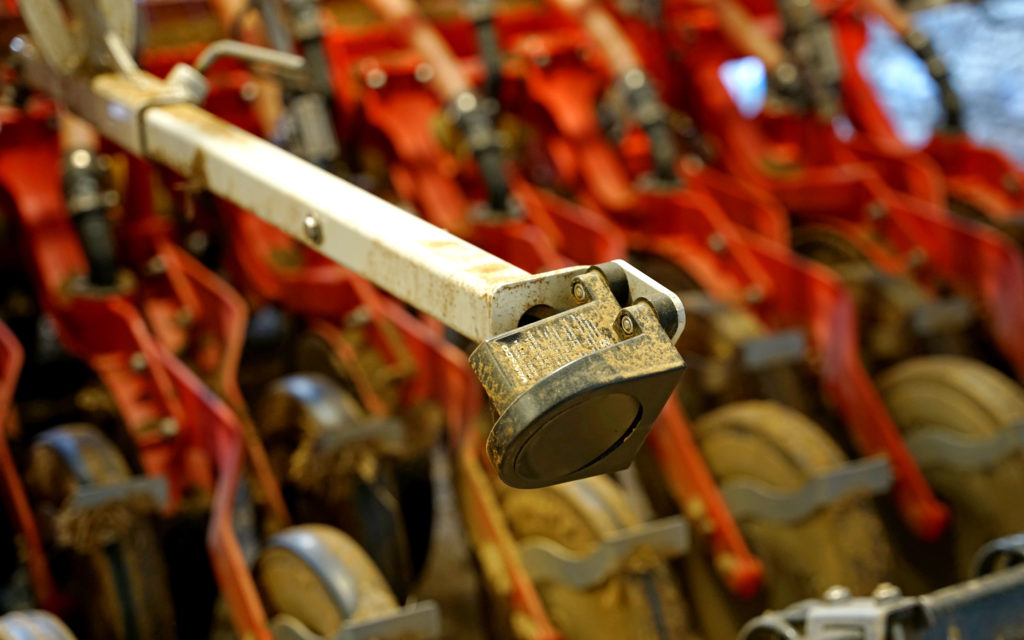 In effect, the combination will pay for itself within two years he believes, but the proof of the pudding is in the eating and this being the first season of using it for maize, the jury is still out.

Although it is still too early to be absolutely sure of the results, first indications are that the investment has paid off.

In the field the crop has grown well and is in places, standing well over 8ft high with good sized cobs. 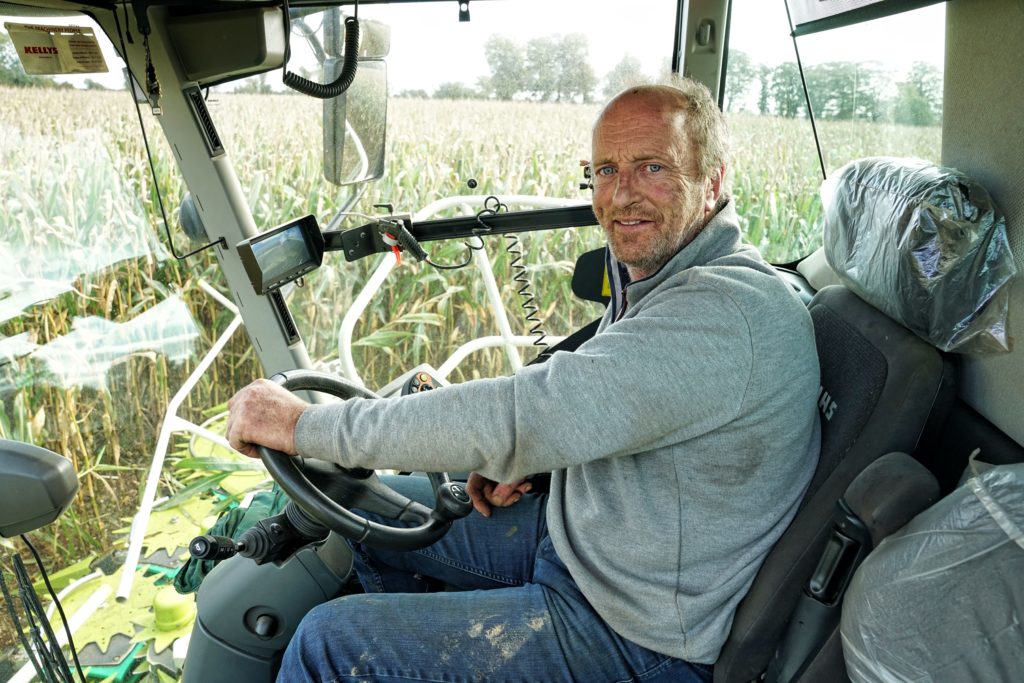 Aiden Wicken at the wheel of the Harvester. He is impressed by the crop

Harvesting was well under way when Agriland visited the farm and although there was no precise record of the actual yield, Aiden Wickhan, the contractor concerned. was suitably impressed with the crop. 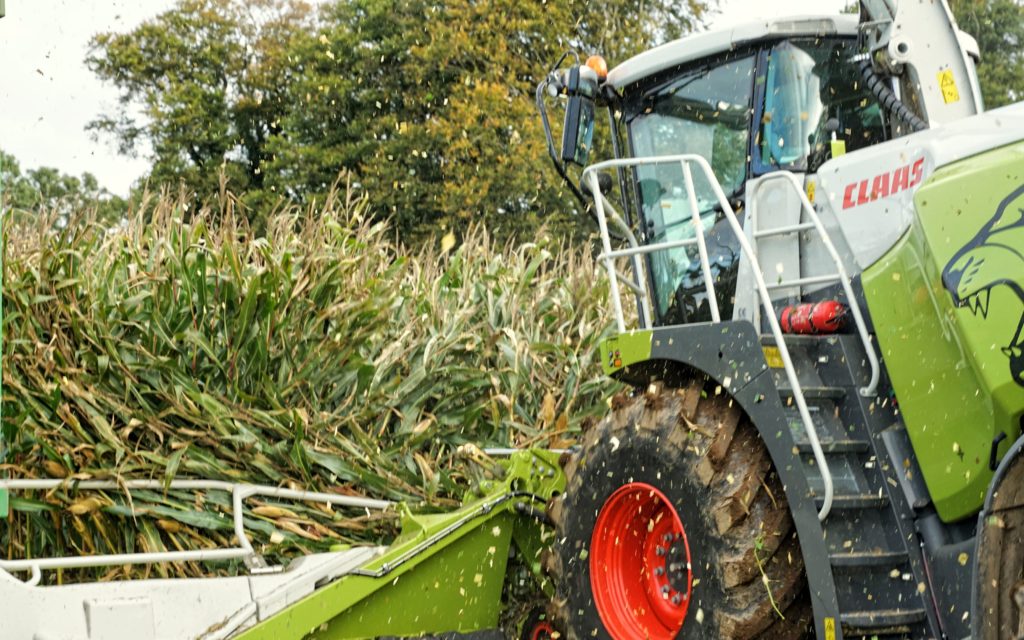 Not that his Claas Jaguar 980 was having any problems in getting through it, anything but.

Fitted with one of only two Claas 12-row headers in Ireland, and with the engine producing something over the rated 850hp, it was downing the stalks and spitting them out at a breathless rate.

Aiden cuts around 700ac of maize and 4,000ac of grass with the machine each year. On the face of it, this may not sound sufficient to justify the expense of such a large header, but once seen in action it all begins to make sense.

An awkward 3ac field was casually cleared within minutes, while rather too much time was spent waiting for empty trailers to return from the pit. 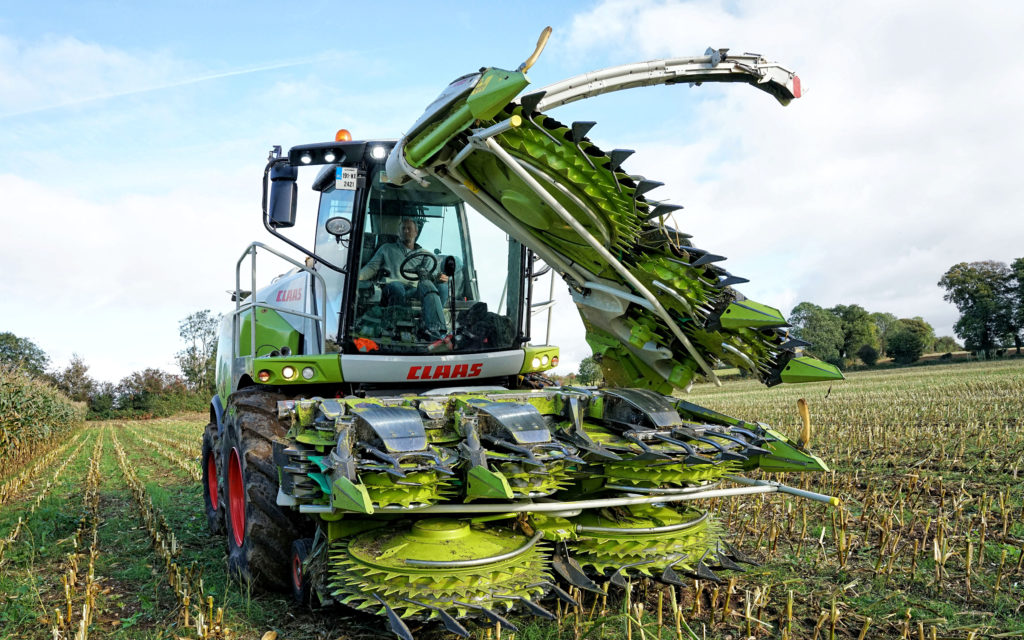 Aiden claims that with the large unit, and a change to side collection, he gains an extra hour of productive work each day.

His customers are also happy to see the 12-row header as it reduces the field traffic and so soil compaction, especially in wet autumns.

The split rows make no difference to harvesting, the header just copes with whatever is placed in front of it. Trailers are filled and despatched in very short order while folding the head for movement between fields is fully automate, with no need to leave the cab. 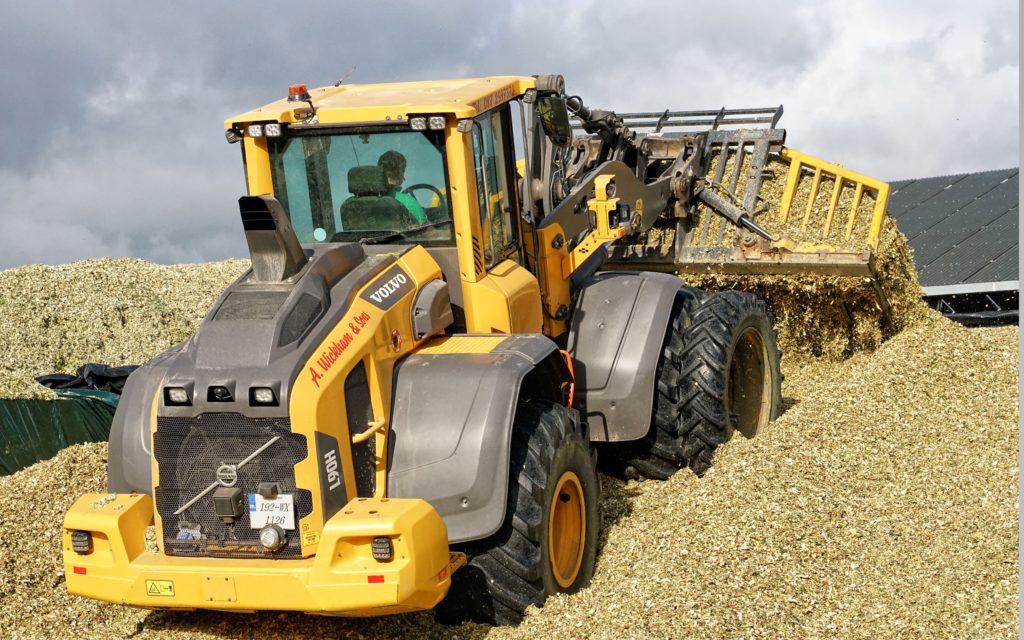 Taking the bull by the horns​

Pat Kinsella stands out as a forward thinking and adventurous farmer who is not afraid to step away from the narrow band of thinking that sometimes constrains the maize crop in Ireland.

The use of plastic in growing maize is coming under ever closer scrutiny with much concern over the long-term effect on the environment.

Finding an alternative which still produces satisfactory yields becomes ever more imperative and those leading the way will be the earliest to benefit.