Changes to zinc use in pig feed discussed at seminars

Written by Breifne O'Brien from Agriland

“There will be challenges but also great opportunities in the coming months for Irish pig farmers, given the upcoming changes in EU legislation surrounding zinc oxide (ZnO) use in pig feed, but farmers need to act now.”

These were the closing remarks from Swinco International’s Colin Twomey at the recent series of conferences held by the Dutch-based swine nutrition company.

The seminars took place on Wednesday, December 1, at the Firgrove Hotel, Mitchelstown, Co. Cork and the Hotel Kilmore, Co. Cavan, on Thursday, December 2.

A diverse audience attended both conferences including both producers and industry representatives as well as other stakeholders in the Irish pig industry.

Speaking to Agriland after the event, Colin Twomey explained: “For the past 30 years, ZnO has been used at pharmacological levels in pig feed throughout the EU to prevent post-weaning diarrhoea in pigs. 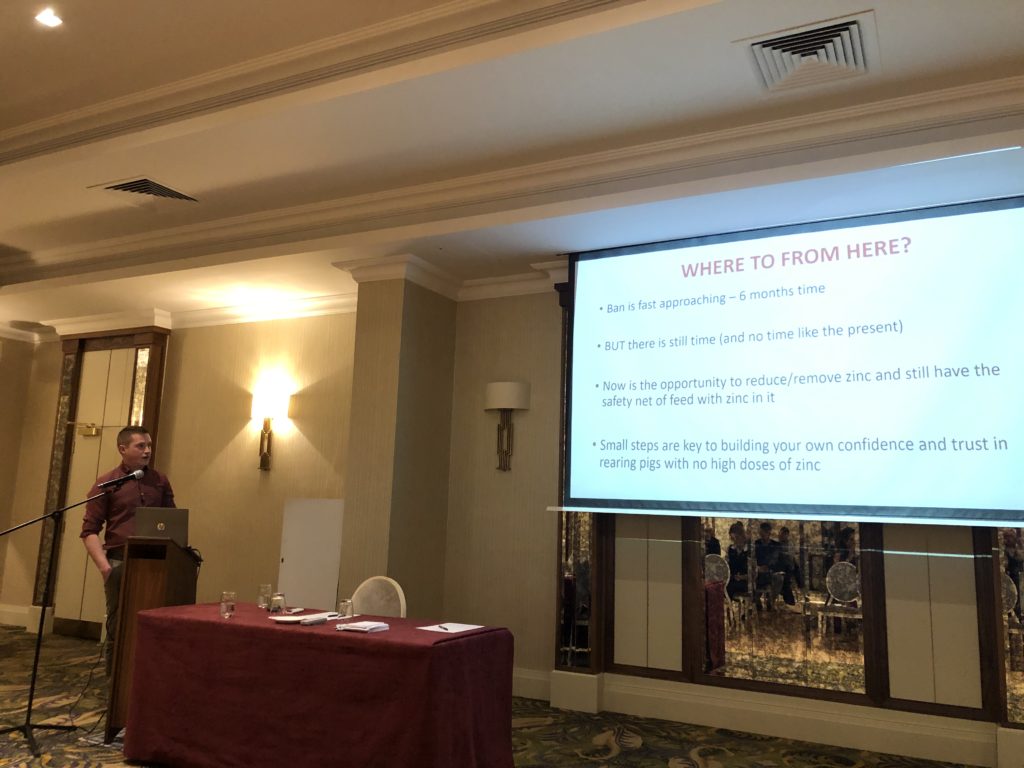 “As well as this, it also helps minimise troublesome secondary infections such as bowel oedema, ileitis and E. coli infections that can all impact pigs after weaning and reduce growth and performance.”

However, Twomey explained that “due to a 2017 ruling by the European Medicines Agency, it was ruled that these benefits did not outweigh the negatives, namely, the risk of heavy metal accumulation in watercourses (in large part due to zinc passing through the pig into the slurry which was subsequently spread), and also the potential of ZnO contributing to the development of antibiotic resistant bacteria present in the gut of the pig”.

The EU gave member states five years to phase out these ‘high level zinc diets’, and the ruling is now fast approaching with a June 22, 2022 deadline firmly on the horizon.

“Under the new rules the inclusion rate will be reduced down to a max of 150ppm.”

He said: “For certain reasons, ZnO aids in this transition from sow’s milk to the subsequent solid, plant-based feed.

“Zn0 maintains the integrity of the gut wall, ensuring piglets do not have the problem of undigested protein in the feed passing through to the hind gut where harmful bacteria will grow and multiply from it,” he explained.

Swinco focused on its key ‘Learn to Eat, Learn to Digest’ strategy as having significant benefits for pig producers in this regard.

Explaining the ‘Learn to Eat, Learn to Digest’ strategy, Swinco Ireland account manager, Colin Twomey explained: “When piglets reach a certain level of solid feed intake in the farrowing pen and the feed contains the correct raw materials, piglets can be weaned quite successfully without the necessity for high ZnO levels in feed.”


He added: “Not only will it aid in the reduction of ZnO in the diet, but the pig will be better set up and prepared to deal with stressors and maximise lifetime average daily gain and minimise food conversion ratio.”

However, Twomey noted that “both pillars need to be present” in order to achieve this.

“If the piglet consumes large volumes of milk replacer through an automatic milk system, then the piglet will have learned to eat, but the changeover to solid feed after weaning will then prove troublesome as the raw materials are completely new to the piglets digestive tract.

“We see this quite often in practice when a seemingly healthy pig at weaning with a good weight, say 8kg, will ‘melt away’ as it hasn’t linked the farrowing pen feed to the post-weaning diet.
Click to expand...

“Instead of feeding milk throughout pre-weaning, we would subsequently introduce a liquid pre-starter with more fibre,” he suggested.

Concluding, Twomey outlined to attendees at the conference that feed and feeding systems “are critically important” to get right, and noted that the challenge of removing ZnO from the diet “has a multitude of challenges and requires a multi-factorial approach”.

To approach this, Paul Spillane of Moss Veterinary highlighted the function of good animal health practices, and Joost Straathof, an independent Dutch water-quality expert, gave an overview of his work with pig farmers to analyse, clean, and install water and water systems.


At the seminars, Swinco presented findings on the Dutch experience of reducing ZnO in feed and noted that Holland has been working with low levels of ZnO in pig diets for approximately five years now.

The post Changes to zinc use in pig feed discussed at seminars appeared first on Agriland.co.uk.