Getting as much material as possible into a defined space is the goal of all baler manufacturers, and Kuhn has taken a novel route in the design of its top of the range square baler in a bid to achieve this.

The company quietly introduced the high density version of its square balers, known as the SB 1290iD, some six years ago. Agriland recently saw it in action, and is here to give a detailed overview of Kuhn’s split plunger baler in operation.

What marks this baler out from others on the market is the design of the packing mechanism, which Kuhn describes as having a split plunger.

Being marketed as such, the immediate assumption is that that there are two half-sized plungers alternatively travelling down the same chamber, to produce twice the impact rate, but at only half the force. 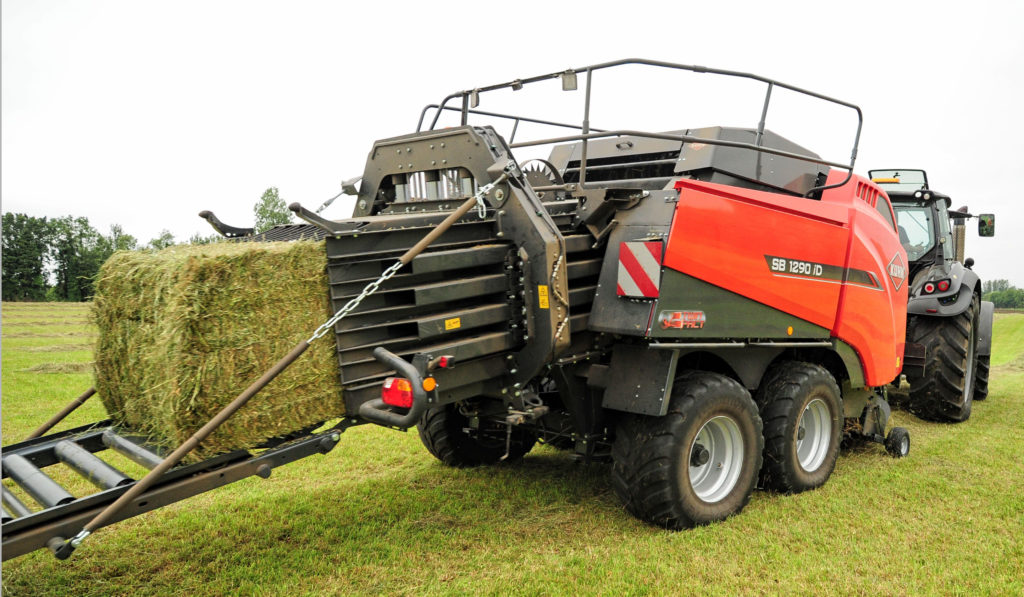 However, it turns out that this is not the case at all. Instead, we might think of the plunger as having two faces, arranged in a way that one impacts the bale slightly before the other.

The ram itself is still one assembly, driven by twin connecting rods from the crank.

The double impact effect is brought about by the design of the plunger. Rather than the connecting rods being attached directly to the head, they attach to a rocker type assembly which transmits the force to the twin half heads. 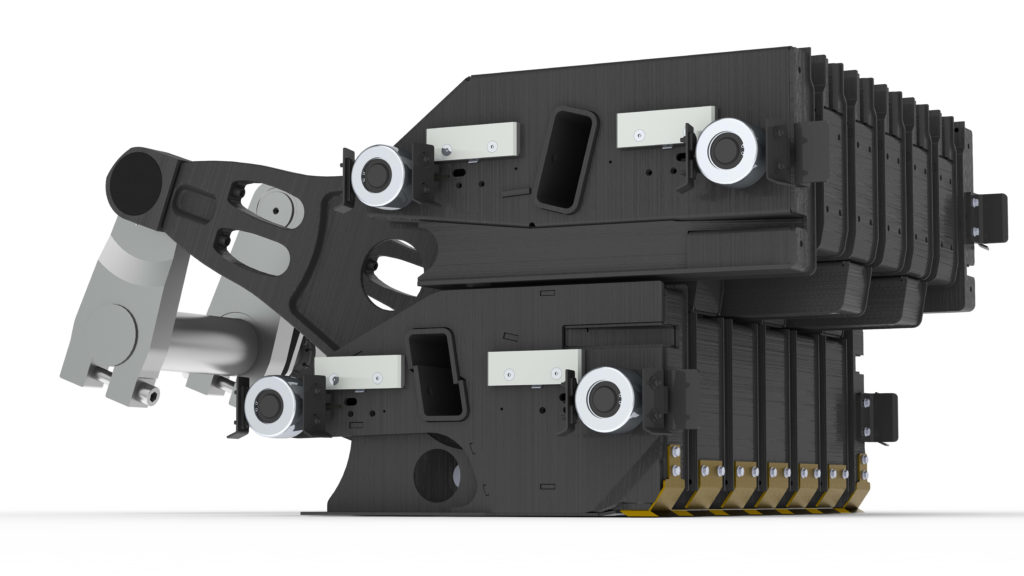 The plunger head consists of two separate elements connected by a rocker mechanism. This ensures the upper half impacts the bale after the lower part

The effect is to hammer the lower half of the bale first with one head, very closely followed by an impact to the upper half.

The plunger then withdraws completely before repeating the process. Overall, the impact pressure on the end of the bale is doubled during the compaction stroke.

Kuhn claims that a single plunger will deliver a 30t impact, whereas this baler produces two 30t strikes in quick succession. 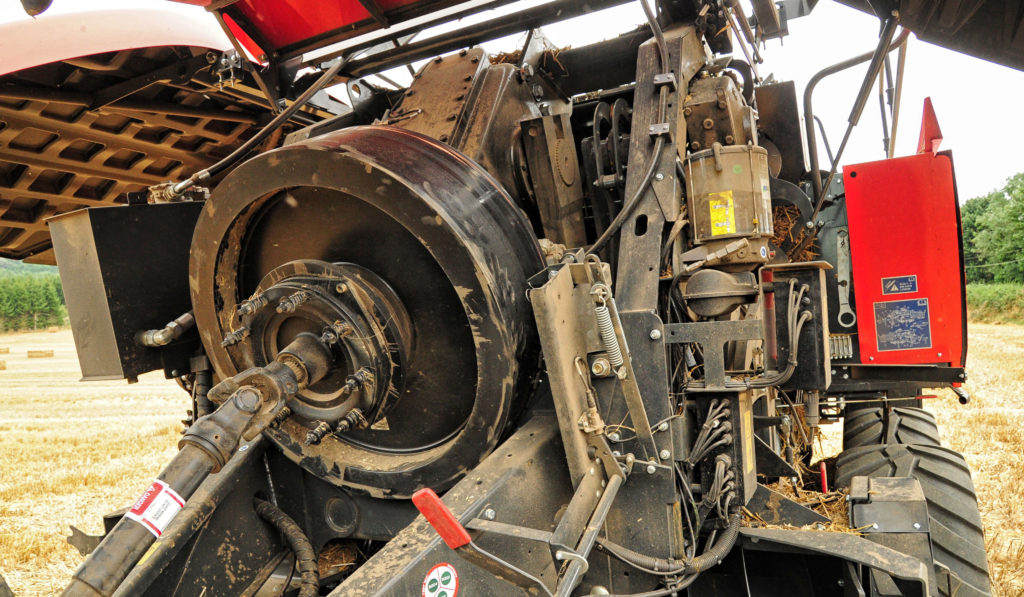 To ensure sufficient momentum is available to deliver the two impacts, the flywheel weighs in at 490kg, slightly heavier than on the standard machines.

The result is a potential 25% increase in bale density. Indeed, in the field it has been shown that when set for maximum weight, bales can be produced that might overload a lorry if stacked normally. 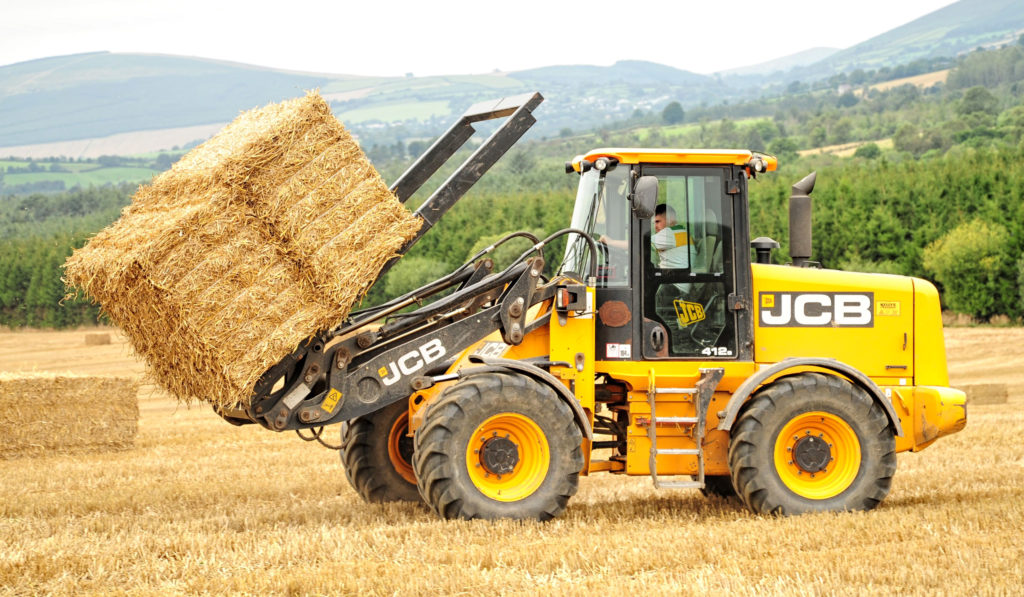 All the bale dimensions, including weight, can be set from the cab; this includes the density, with nine rams acting on the upgraded bale chute to provide the resistance to the plunger.

So far in Ireland, bales tend not be sold by weight. But with the ability to weigh and test bales for moisture content, that is likely to change over years. Both metrics are available on Kuhn square balers. 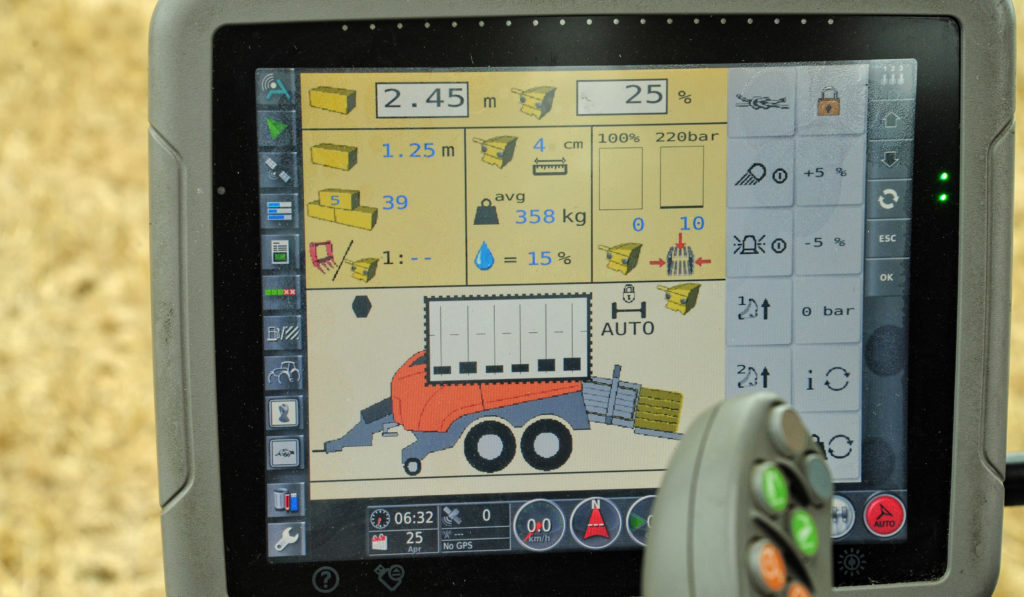 As each bale passes out of the machine, it is weighed and an accumulative total of the crop harvested can be shown on the in cab ISOBUS screen, along with individual bale weights.

Adding to the consistency of the bale is Kuhn’s flake forming system, which loads a ready shaped flake of material into the bale chamber. 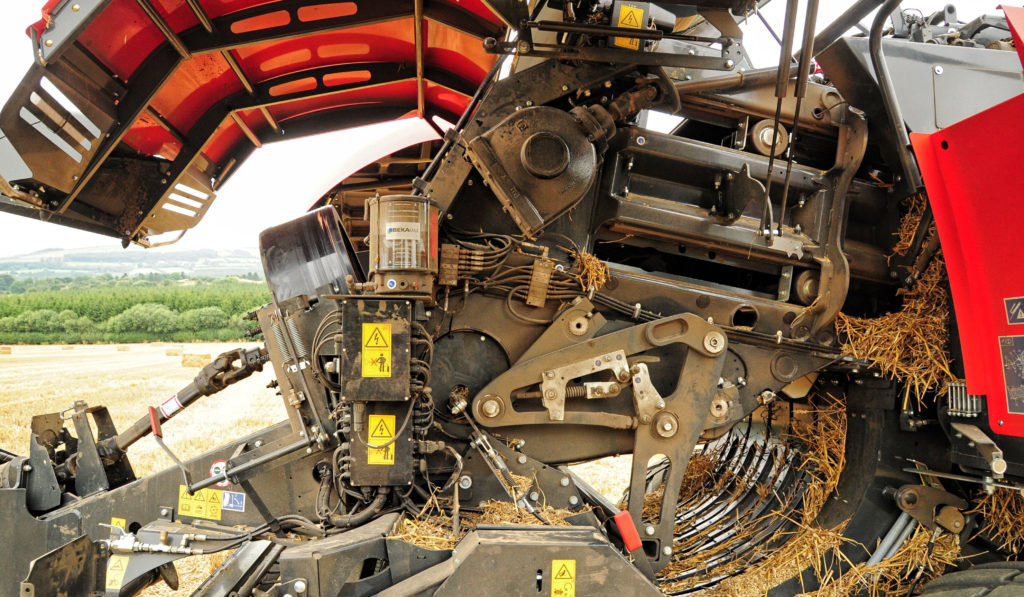 As straw enters the loading chamber, the feed forks travel only far enough to push it into the base of flake formation zone, which is of the same width and height as the main bale channel.

When this is full (a state determined by an integral pressure plate), the forks are released and allowed to travel further upwards, pushing the flake into the path of the plunger.

Despite this impressive performance, it is not all about producing big bricks.

The desired weight may be quite different from that which is possible. The company claims that less power is required, enabling smaller tractors to be used and fuel savings to be made. 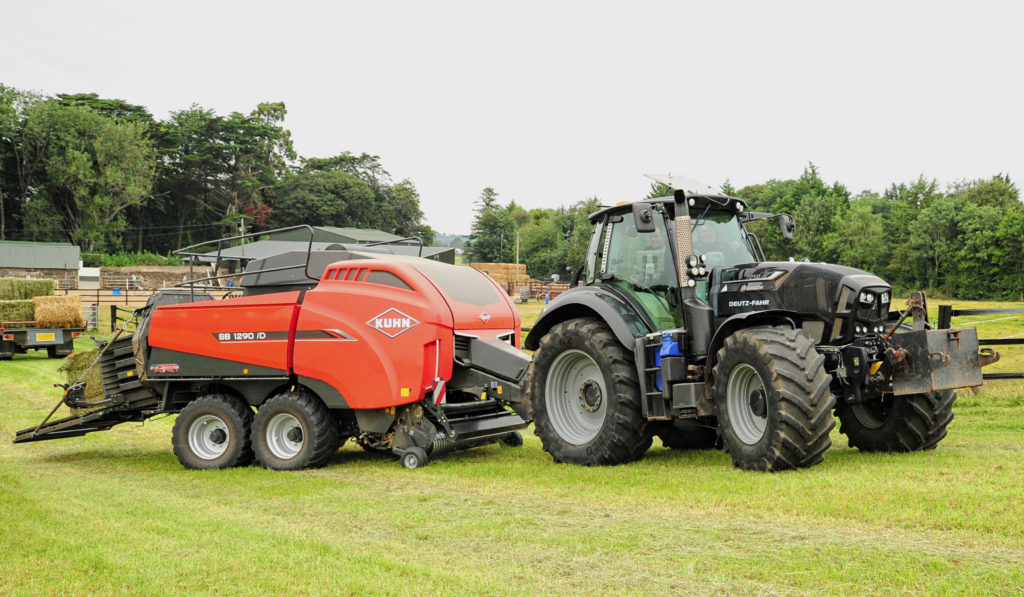 Suggested power requirements are 180hp without the 23-blade chopper mechanism in use, and 250hp if the full set is inserted into the crop stream.

The bale chamber is 3m in length, providing a maximum bale length of 244cm. Width is 120cm and height is 90cm. The latter two figures accounting for the 1290 designation. 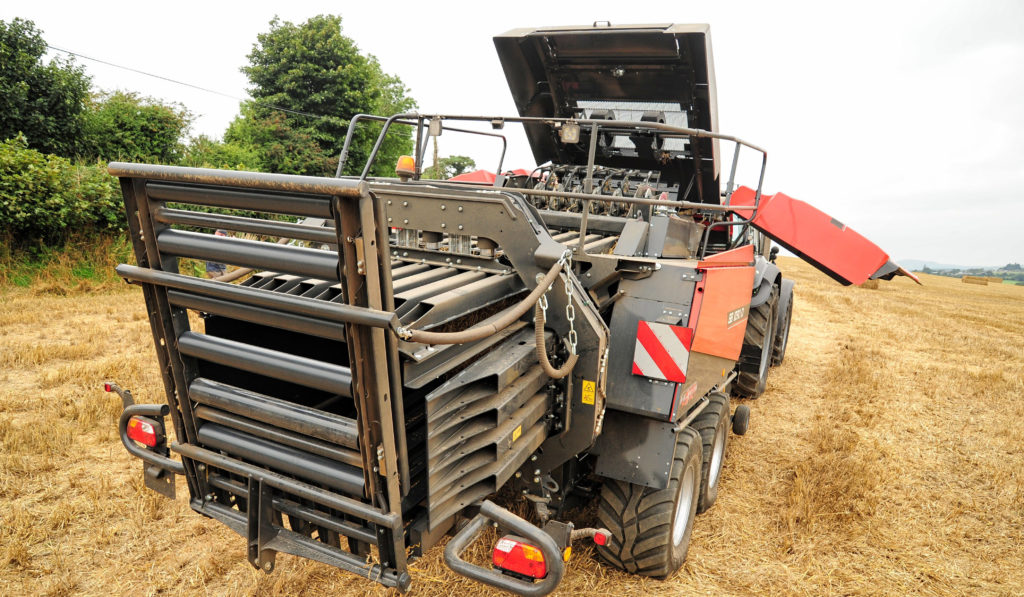 Double knotters secure the bale, and even at maximum density there is little risk of it bursting the strings, according to Kuhn.

Chopping length is selectable from the cab, with the choice of seven, 11, 12 or the full 23 blades being deployed, depending on the fineness of chop required.

The pick-up reel is 2.3m wide and has a powered feed roller. A steering rear axle with automatic locking for reversing is fitted as standard. 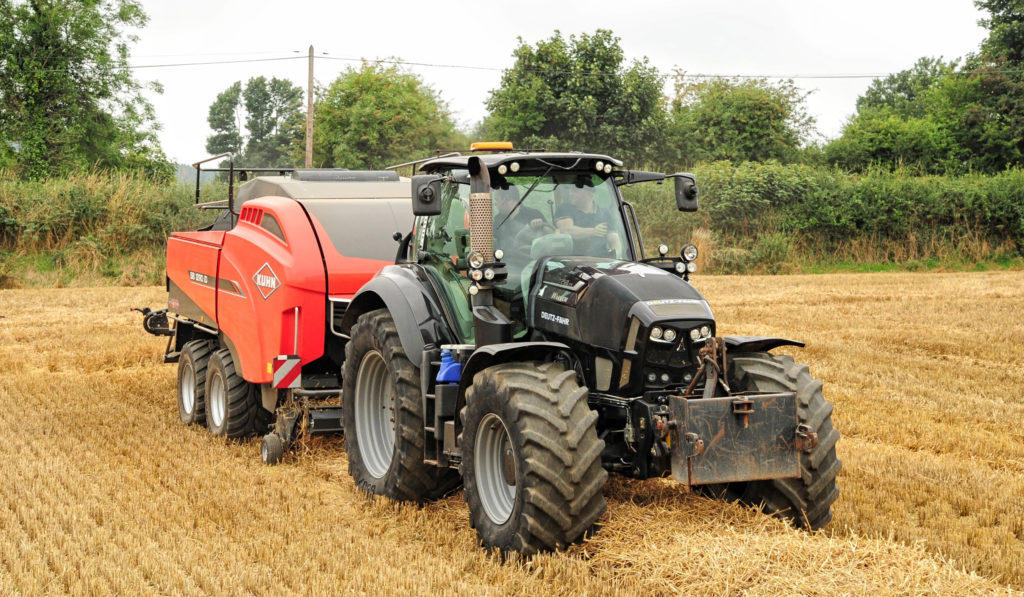