The importance of US crop delays

The delay in planting the 2021 US maize crop is part of the reason US maize, and so UK wheat, prices have been rising. Cold and dry weather in the US meant that by Sunday, planting was 17% complete. This is 3 percentage points behind the 5-year average as Megan reported on Tuesday.

This delay may not sound much, but any delays could have big impacts this year. Why? Because US maize stocks are currently forecast to be so small at the end of this season.

The US is predicted to have 34.3Mt of maize left in stock at the end of this season (2020/21) on 30 August 2021. This equates to just 9% of combined US domestic and export demand this season (USDA). Put another way, this is approximately 33 days’ or roughly one month’s supply. The International Grains Council (IGC) forecast total US demand and exports to remain at similar levels next season. The USDA will release its first full forecasts for next season on 12 May. 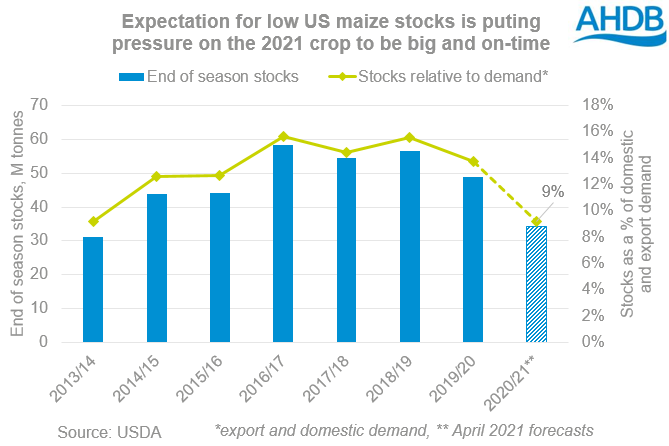 Such a low level of carry over stock matters. The 2021/22 season starts on 1 September, but the US harvest only really gets going in late September. It takes a couple of weeks for bigger volumes to be harvested and so available to the market. As such, the stocks carried over from this season will have to last until the new crop becomes available.

There’s usually a 22 week gap from when the USDA starts reporting maize planting progress to the start of reporting harvest progress. The planting of 2021 crop was first reported as at 04 April. A gap of 22 weeks would put us at 05 September for the start of harvest reporting. So on paper, the stocks should just about be able to last until then.

But this assumes no further delays to planting or in the growing window. In some years, such as 2009, the gap between planting and harvest reporting is as wide as 24 weeks. In 2009, wet, cool weather delayed planting and hampered crop growth, but led to what at the time was a record US yield. It’s worth noting that a smaller gap of just 20 weeks, occurred in 2012, but this rapid development was due to hot, dry weather, which also lowered yields.

Any further delays to planting the crop could result in delays in those crops being ready for harvest. Yield impacts are also possible if crops are planted outside the optimum window. This optimum window is different for every state e.g. for Iowa, adverse effects have been seen for crops planted from mid-May onwards. The risk from later planting is bigger in the northern states, because of the shorter growing period. This is where the biggest delays are currently.

So, part of the reason US maize prices are rising now is to try and reduce old crop demand for US maize and make stocks last until harvest. The less than ideal start for crops means there’s also attention on yield potential. Both the rise in old crop prices and the early attention on yields is supporting new crop prices.

There’s still lots of time for conditions to turn more favourable and the critical period for yields (pollination in July) is still ahead. But, given the tightness in US and global maize supplies and concerns about the Brazilian maize crop, the market is already reacting. This in turn is pushing up UK wheat prices.

The importance of US crop delays
Join the 3.5K people who subscribe to our Grain Market Daily publication here - https://ahdb.org.uk/keeping-in-touch
You must log in or register to reply here.