Cold weather having an impact on EU and US grain crops

As we have reported over the past few weeks, cold and dry weather has been causing concern for new-crop grains supply, fuelling the current rally.

Daily gains have now been seen across the global grains complex, with nearby Chicago maize prices rising 16% over the past 6 days, to close at $267.91/t yesterday.

UK feed wheat futures too have seen support from new crop concern. The Nov-21 contract has gained 15% in the last 10 days, closing yesterday at £191.30/t.

Some small cuts have been made by the Commission to forecast yields, especially in France. Countries including the UK, France and Spain have been identified as areas of rain deficit. 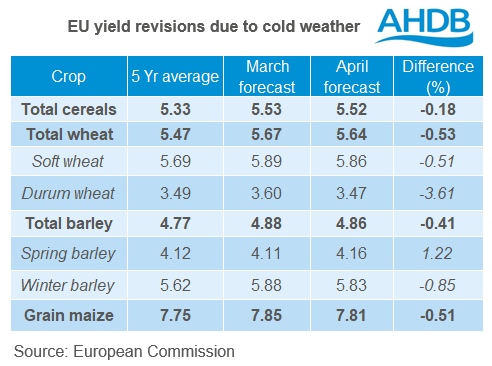 The report gives yield forecasts for total barley and soft wheat, as such we can apply these to EU crop areas forecast by Stratégie Grains and estimate production. While the yield cuts in the report have impacted on potential production, levels remain well above the 2020 harvest. 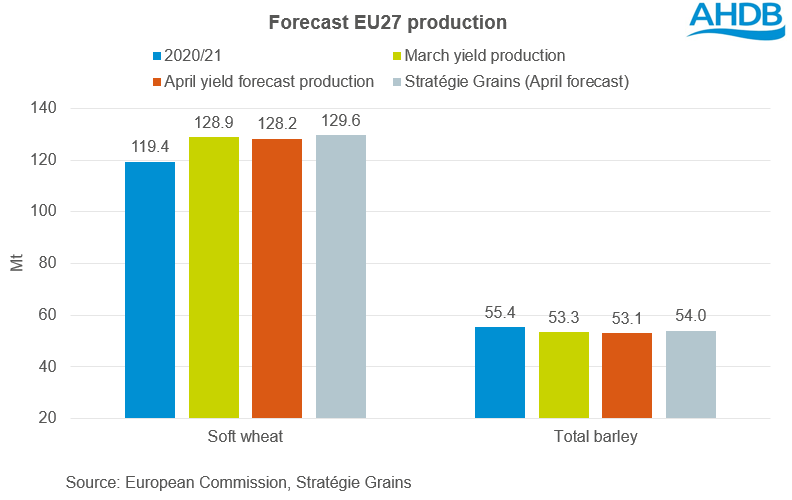 For the UK, the report concluded winter crops are in ‘fair to good condition’. Spring barley drilling is now said to be complete in the south and almost complete in the north. There are concerns surrounding dry weather for later drilled winter crops and spring crops going forward, should weather remain dry. Though one positive to cold weather has been a noted lack of pest and disease pressure.

United States
The USDA also released their latest crop condition report yesterday. As at Sunday, 17% of maize had been planted, up on the week before, but 7 percentage points (pp) behind last year and 3pp behind the 5-year average. Iowa, Missouri, and Illinois are states identified as behind average planting progress. Collectively, these states represent 36.2% of the US maize crop.

For winter wheat, crop conditions had fallen week-on-week. The percentage of crops rated ‘good’ or ‘excellent’ reduced to 49%. This was a fall of 4 pp week-on-week, and 5pp down on the same point last year. Reductions were seen in Ohio, Texas, Washington, Montana, and Oklahoma (collectively 32% of US winter wheat production). Spring wheat and barley planting is ahead of average at 28% and 35% drilled, respectively.

Can we expect prices to continue to rise?
Global cold and dry weather has been strengthening grain values in recent weeks and is likely to continue to do so until enough physical rain arrives to ease concerns. Some welcome rain is forecast for the UK (a shower arriving for some this morning), Europe, and the some of the US in the coming weeks, though how much actually falls will be key.

Read more on the USDA projections on the AHDB website

Join the 3.5K people who subscribe to our Grain Market Daily publication here - https://ahdb.org.uk/keeping-in-touch
You must log in or register to reply here.