Quite what spurs somebody to gather together a collection of any one particular type or genre of tractor is often a matter of childhood experience.

It was perhaps the enthusiasm of John O’Connor’s uncle for Lanz tractors that lies behind his lifelong interest in German marques, a passion which has resulted in this rather unique collection. 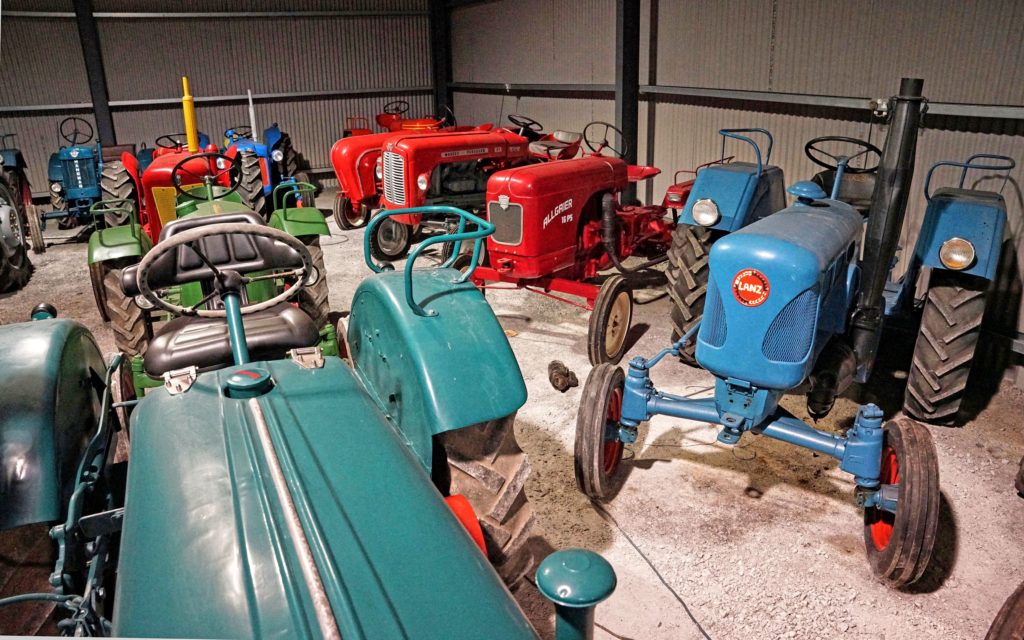 Although Lanz features strongly in John’s collection, they are by no means the only marque represented

John is based near Farranfore, Co. Kerry, within earshot of the airport and from where he runs his engineering business.

The majority of machines in his shed are from the 50s and represent the final flowering of the single-cylinder horizontal engine and its rapid displacement by the lighter and more efficient vertical format.

Lanz and the hotbulb engine​

Heinrich Lanz AG started building the famous Bulldog tractor in 1921 at Mannheim, where John Deere, which bought the company in 1956, now has its European operations centred.

Pre-war, the company had held up to 40% market share in Germany but with the division of that country and the near total destruction of the factory by allied bombing, the company had found it difficult to re-establish that success. 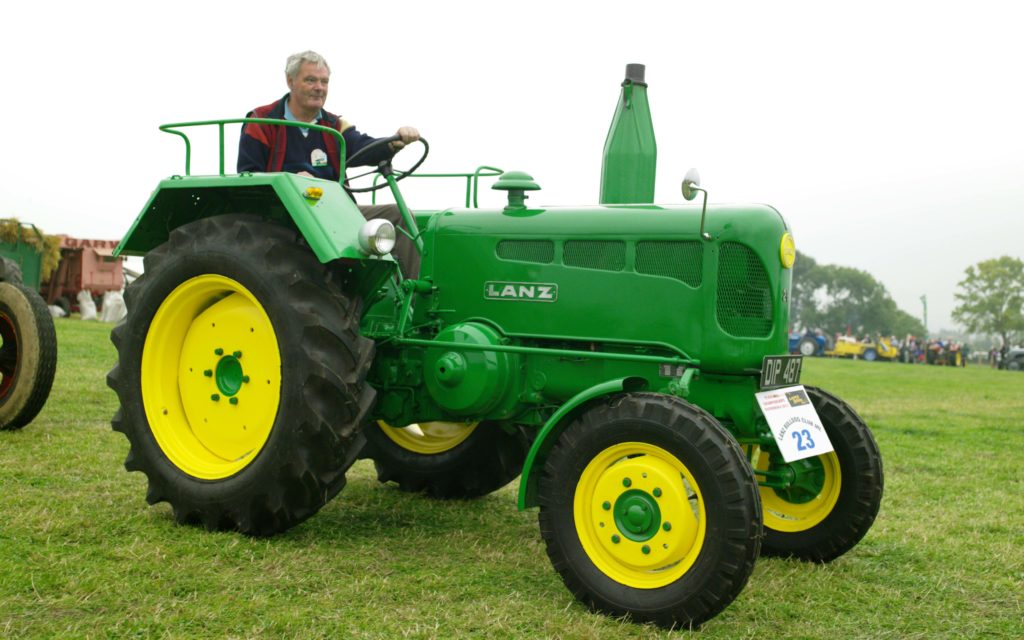 The Lanz Bulldog was produced in John Deere colours for a short period. This model was being shown at the 2013 ploughing match by a fellow enthusiast

However, production of the Bulldog continued up until 1960, by which time it was rather dated and the earlier attractions of the big single-cylinder engine that could be made to run on pretty much anything it was offered, were no longer relevant.

Another virtue was their indestructibility; they could take all sorts of abuse and still run. No better example of this lies in the story behind the pre-war Bulldog that is one of John’s more recent acquisitions. 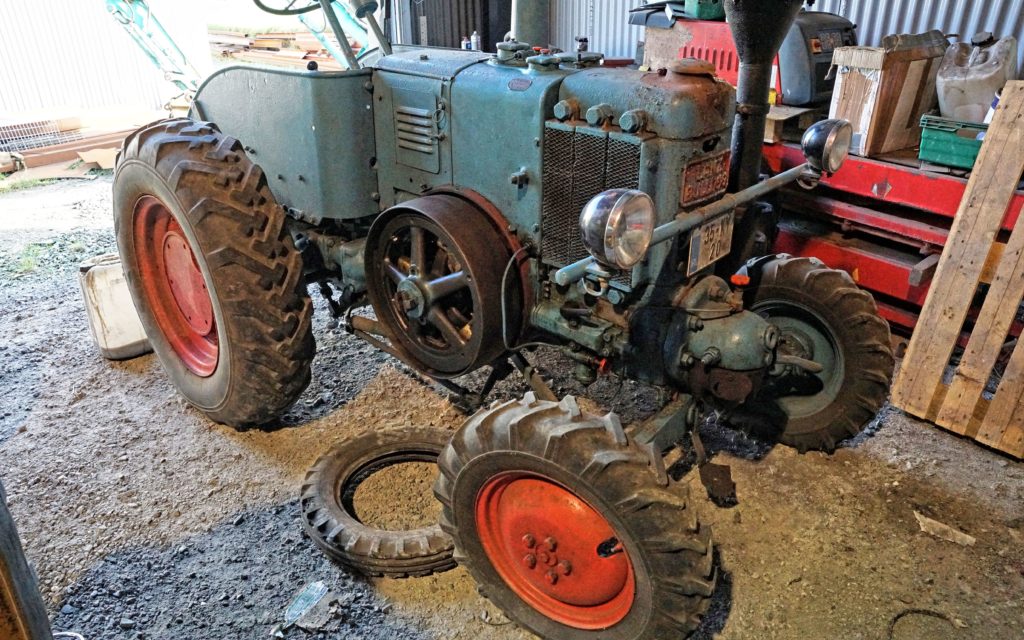 Other than modern coolants eating away at the paintwork, this Bulldog has survived the past 86 years remarkably well, even though it was buried for the latter part of WWII

It had originally been supplied to the Reicher family in Germany in 1935 and worked on their estate up until the time that the demand for steel for the war became so great that the German government ordered all tractors to be turned in for scrap.

Defying this order, the owners immediately dug a hole and buried it away from the prying eyes of the army. It was immediately dug up again once the war was over and, apparently started again with no great need for fuss or attention. 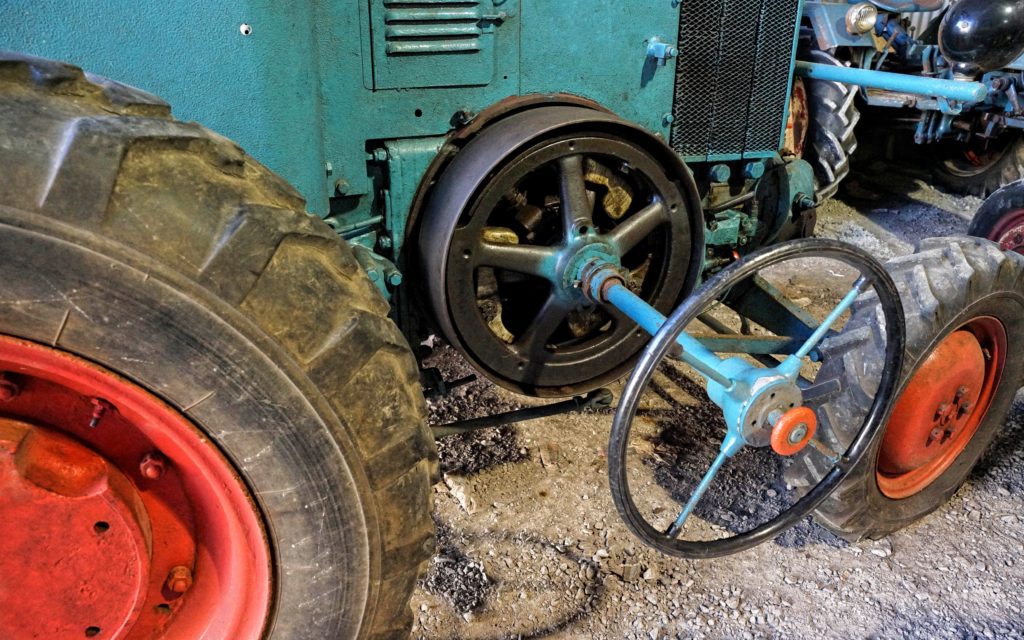 Should the family have been caught in this act of rebellion, then their end would have been swift and merciless. Thankfully, it did not come to that.

Another model undergoing restoration is a 36hp post-war tractor which was used by the Bird family for assisting at carnival sites. This machine has few hours put up as its primary purpose was to position the generators and rides on soft ground.

Unfortunately this one fell into disuse and its fuel tank was filled with sand by children playing on it during its retirement. 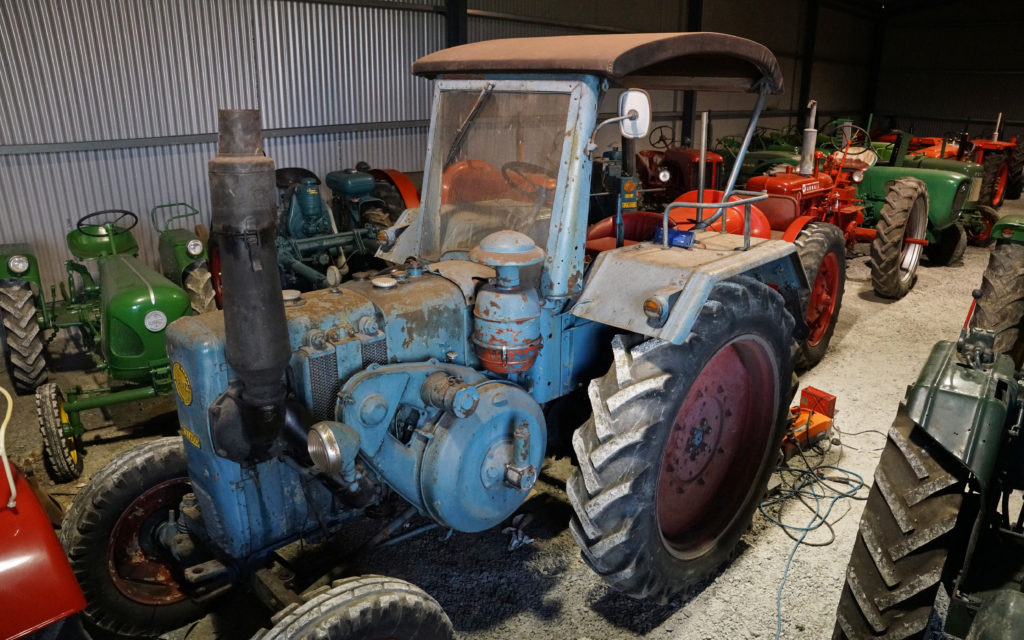 Despite having its fuel system clogged with sand, this 34hp model now runs as sweetly as ever

This might have spelled the end for many lesser machines, but thanks to the effectiveness of the fuel filter, not one grain made it through to the injector pump.

John attributes this to the insistence of Lanz in providing the finest filtration possible. He notes that even if the fuel pipe is disconnected from the injector pump “it will take a week for the fuel to start trickling through”.

A thorough cleaning of the fuel and lubrication systems before it was restarted saw the tractor chug happily back to life, completely unscathed by the incident.

Another that survived the army​

The intentions of the military services were not always dishonourable. A later 17hp model in John’s collection served in the East German army from 1954. 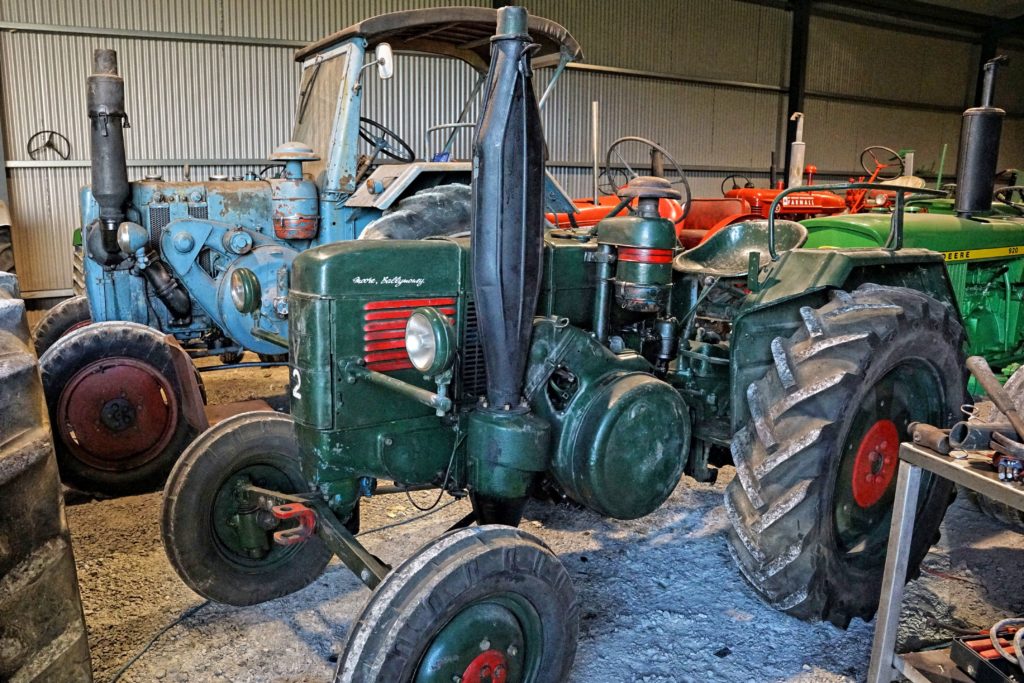 Having done its military service in the east German army, this Lanz is now retired to Co. Kerry

To facilitate the use of military equipment, an additional high pressure hydraulic pump and separate was fitted. This gave a far greater performance than the standard hydraulic system which struggled to tip an average farm trailer of the time.

The demand for orchard tractors on the continent has always been strong with manufacturers providing slimmed down versions of standard models to satisfy this market.

Lanz was no exception and the model that has found its way into John’s collection neatly shows the modifications needed for the tasks likely to be encountered. 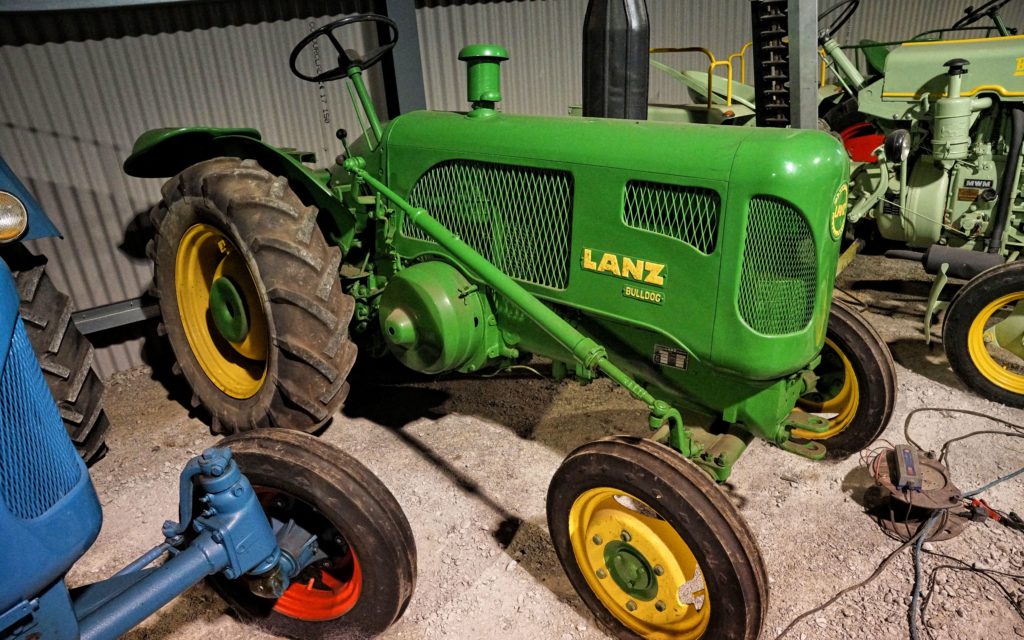 This 24hp orchard model has the Lanz name and John Deere livery. The hinged drivers seat can be seen folded out of the way to aid ingress

One of the most striking changes is the raising of the steering rod to above the wheels, as there is no longer room for it to run alongside the engine due to the shortened axles.

Not only has it been repositioned but it has been sprung loaded to absorb shocks from encounters with ruts and rocks, thus saving the fingers of the operator.

A further feature is the seat which hinges at one side to allow the operator to climb on board from the rear as there is no room to squeeze between the mudguard and bonnet to get behind the wheel.

Other models in the collection​

Although Lanz tractors are a major part of John’s collection, there are plenty of other machines of interest.

These range from a home-engineered four-wheel-drive conversion on a diesel Ferguson 20, to less well-known makes such as Nomag and Holder. 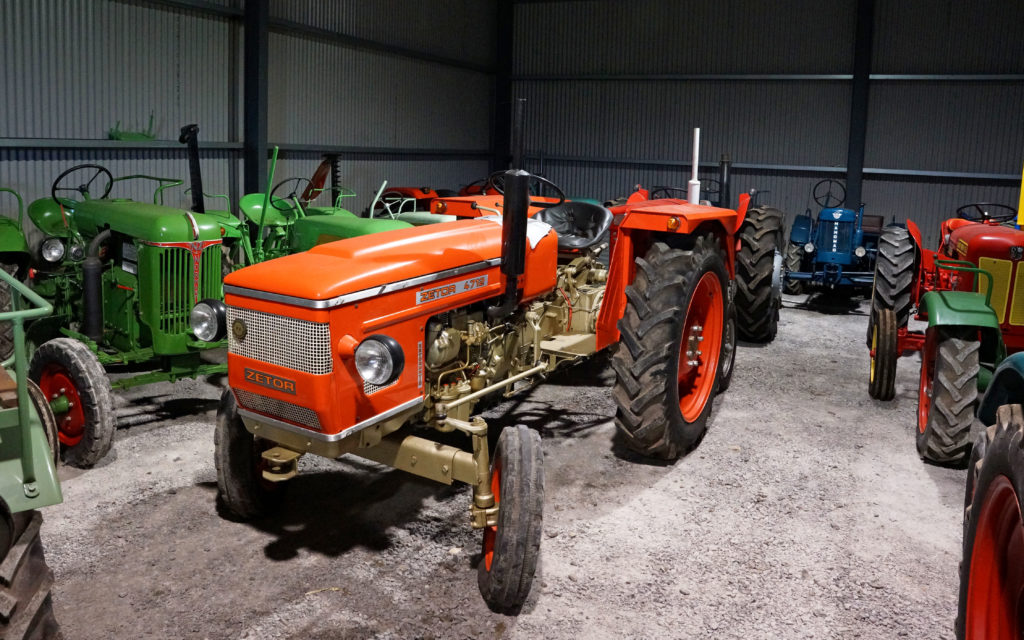 Although not German in origin, this Zetor 4712 still finds a good home in Co. Kerry

What John has captured here is a transient moment in tractor history as the format of a large single cylinder, itself inherited from the days of steam, gave way to banks of much smaller cylinders which, despite all the electronic jiggery pokery, is still the arrangement we have today.