Green Grains - Why is there no market yet? 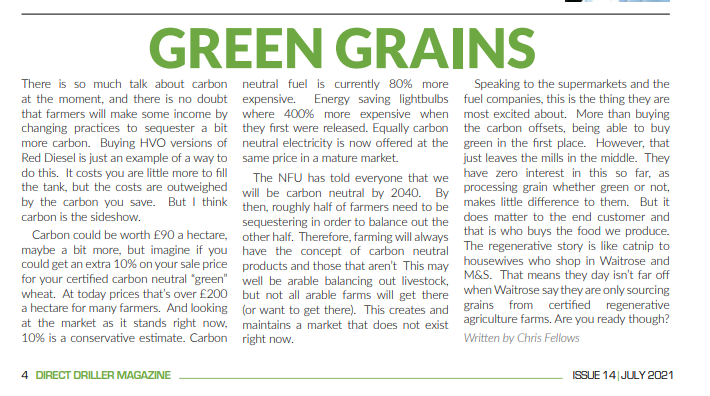 There is so much talk about carbon at the moment, and there is no doubt that farmers will make some income by changing practices to sequester a bit more carbon. Buying HVO versions of Red Diesel is just an example of a way to do this. It costs you a little more to fill the tank, but the costs are outweighed by the carbon you save. But I think carbon is the sideshow. Carbon could be worth £90 a hectare, maybe a bit more, but imagine if you could get an extra 10% on your sale price for your certified carbon neutral “green” wheat. At today prices that’s over £200 a hectare for many farmers. And looking at the market as it stands right now, 10% is a conservative estimate.

Carbon neutral fuel is currently 80% more expensive. Energy saving lightbulbs were 400% more expensive when they first were released. Equally carbon neutral electricity is now offered at the same price in a mature market. The NFU has told everyone that we will be carbon neutral by 2040. By then, roughly half of farmers need to be sequestering in order to balance out the other half. Therefore, farming will always have the concept of carbon neutral products and those that aren’t This may well be arable balancing out livestock, but not all arable farms will get there (or want to get there). This creates and maintains a market that does not exist right now.

Speaking to the supermarkets and the fuel companies, this is the thing they are most excited about. More than buying the carbon offsets, being able to buy green in the first place. However, that just leaves the mills in the middle. They have zero interest in this so far, as processing grain whether green or not, makes little difference to them. But it does matter to the end customer and that is who buys the food we produce. The regenerative story is like catnip to housewives who shop in Waitrose and M&S. That means they day isn’t far off when Waitrose say they are only sourcing grains from certified regenerative agriculture farms. Are you ready though?
Click to expand...

Does Direct Driller have a proof-reader…?

Steevo said:
Does Direct Driller have a proof-reader…?

Are you offering? As the help would be appreciated.

Slurry application has moved forward tremendously over the past few years with the emphasis very much switching to using it as a resource rather than disposing of it as a waste product.

Even dyed in wool, tillage specialists such as Lemken are joining the movement with the company now offering what amounts to a conversion of their compact disc units to a slurry incorporation tool.

This new product comprises a VogelSang slurry distribution head mounted on the frame of a set of Heliodor compact disc harrows.

Lemken claims that the Heliodor offers a sound basis for this type of application due to its...
News
Continue…
Top