How much wheat will E10 ethanol production use?

On 24 February the Government announced the introduction of E10. Following this. A press release from Vivergo fuels outlined its intentions to produce ethanol from “early-2022”. The Hull based ethanol manufacturer had closed in 2018. In that time we have seen the volume of UK wheat used by the human and industrial (H&I) sector decline.

The introduction of E10 will increase the volume of ethanol needed. But, usage of UK wheat is likely capped at the historic maximum, with no additional UK capacity having been added.

Fast forward to 2020 (Jan-Dec) and just 39 million litres of ethanol is reported to have been produced using UK wheat as the feedstock, so far. In Jan-Dec 2020 Wheat usage by UK flour millers reached 5.93Mt.

Between 2013/14 and 2020, there is a clear trend between the volume of ethanol produced using UK wheat and the volume of wheat used by flour millers. We can use this trend to estimate wheat usage in 2021 and 2022, once E10 is introduced. To better reflect usage going forward 200Kt of wheat demand has been removed, this is indicative of the closure of Roquette at Corby.

This analysis assumes that consumption of wheat by other aspects of the flour milling and starch supply chains remains stable. 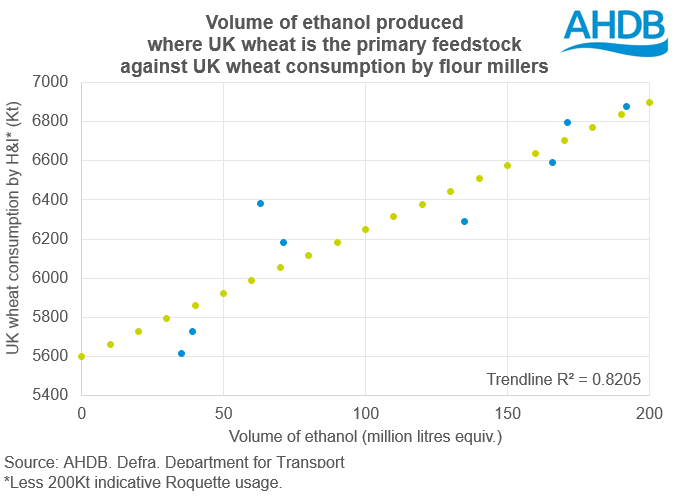 If ethanol production, with UK wheat as the feedstock, was to double in 2021 from 2020 levels, wheat consumption by flour millers is estimated at 6.1Mt in the 2021 calendar year. An increase of 261Kt on 2020 usage. This assumes that Ensus operates with increased UK wheat usage.

As mentioned above, Vivergo is due to recommence ethanol production in 2022. It is unlikely that ethanol output using UK wheat will reach historic highs in 2022. There will be inevitable challenges of opening a plant which has been shut for four years. If we assume that output reaches 60% of the 2016/17 high, wheat usage in 2022 would reach 6.3Mt, up 489Kt on 2020.

The usage numbers may seem low relative to the H&I statistics in the balance sheet. But, it is worth noting that the 2015/16-2019/20 average of wheat used in brewing, malting and distilling is 708Kt. Further, it is worth remembering that estimates here are for calendar year usage, rather than marketing year.

Finally, forward demand for wheat in bioethanol will also be affected by the relative cost of importing maize. At present, new crop maize would appear uncompetitive, but, close attention will need paying to global maize S&D.

What does this mean for prices?
Firm demand, all other things being equal, will lead to firm prices. But, Yorkshire (North Humberside) delivered feed wheat premiums for November delivery have already stretched out to £9/t over futures. It will take a change to domestic supply and demand for this premium to stretch too much further. The key factors which could stretch this premium are;