With so much data captured on farm, making it useful can be like unlocking Pandora’s box. Researchers from Rothamsted Research – Kirsty Hassall, Alice Milne and Andy Whitmore – share how yield and satellite data can help with precision management in potato crops.

Modern technology allows farmers to vary inputs across fields, giving the potential for more profitable and environmentally friendly farming. To realise this potential, farmers need good information about the likely response of the crop at scales appropriate for management.

The AHDB Rotations Partnership project is an integrated piece of research into soil and water management in agriculture. Through a combination of experimentation and data analysis, the project aims to develop and apply new technologies to help farmers manage their soil resource. To that end, the project incorporates work on the variability of soil and the role that precision management can play in enhancing productivity and profit with minimum impact on the environment.

One of Rothamsted’s contributions is to investigate how farmers could make best use of the information captured by yield monitor data and satellite data and apply this knowledge within the context of precision management in potato crops.

What we have found so far

Yield monitor data is now collected as standard on many farms. In addition to this, processed satellite data, which is available at increasingly fine resolution, can be used to see how crop response varies within a field throughout the growing season. These sources of data offer a potential means to understand and predict the variation in crop response within fields.

There are many sources of variation within a field; some are obvious, some are not. One of our first investigations was to see if we could detect some of the more obvious sources of variation from potato yield monitor data, specifically the presence of tramlines within potato fields. Indeed, we were able to demonstrate that despite the inherent variation associated with yield, it was possible to detect this patterning in the data, thus demonstrating that potato yield monitor data can be sensitive enough to pick up within-field features, such as yield losses associated with compaction around tramlines. This finding gave us confidence that these data can be used to identify other less tangible sources of variation within a field.

Further investigation was undertaken on the potential for yield monitor data to inform differential zones within a field for use in precision management. We developed spatially coherent clustering methods to identify zones within a field where points within each zone varied similarly to one another across seasons. In this type of analysis, we might pick up a zone that yields consistently better than the field average across seasons or one that consistently yields poorly. Importantly, by using data across multiple seasons, we are also able to identify zones that might be at risk from seasonal features. For instance, a zone that performs well in most years but particularly poorly in ‘abnormal years’ may be an area at risk of drought which is only apparent in particularly dry seasons. 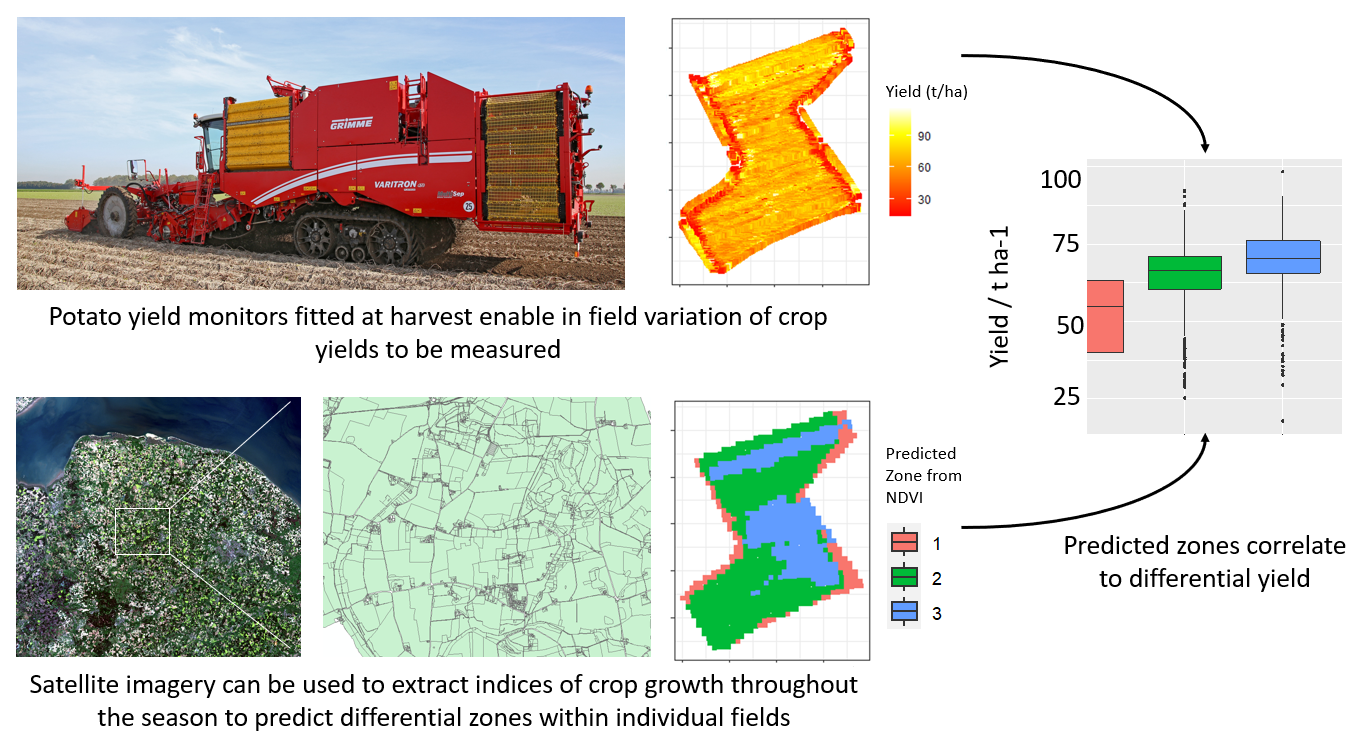 A key challenge to achieving the above is to obtain data across seasons for the same field. Given the long rotation of potato crops, typically, we only had a single year’s worth of data available. To predict zones in potato crops, we used yield monitor data from other crops in the rotation (where available) and also satellite NDVI data. To validate these predictions, we compared the identified zones with the observed potato yields. Over 50% of fields showed a good correspondence between predicted zones and observed yield. In some, the yield variation across the field was not great enough to detect, and in others, the variation in yield was driven by factors not detectable from crop yield or NDVI.

During the project, we had access to yield monitor data from a reasonable number of different fields and this motivated us to compare not only the average yield per hectare across fields, but also how the zones compared across all fields within the study. This adds a new level to yield benchmarking tools and potentially aids interpretation for farmer-led decisions.

Understanding and making use of the results

From a scientific perspective, our results were interesting, but the question remained: are the management zones informed by sensed data useful for variable-rate management?

Our plan was to hold interviews with farmers to determine how our analysis could best serve their needs and to establish whether farmer knowledge could be scientifically integrated into the method of analysis. Like so many things in the past year, COVID-19 interfered with our plans, and so, instead, we conducted a small online survey with approximately 60 members of the industry about their motivations for variable-rate management and data and software needs.

Responses from the questionnaire suggested that the main motivation for potato farmers to adopt variable-rate management was to increase profit, closely followed by reducing impacts to the environment. The respondents believed that variable-rate management was most appropriate for fertiliser application, but irrigation and adjusting seed rate also ranked highly in the list of operations that should be managed differentially.

With respect to the use of management zones formed from sensed data, most respondents suggested interpretation would be best enhanced through their own expert knowledge of the field and additional maps of soil variation. Comparing yield metrics through a benchmarking tool was also seen as a helpful way to interpret and use management zones.

Yield monitor data and satellite NDVI are undoubtedly of interest to farmers as they reveal variation in their fields. As with any project or research, in attempting to answer one question, we inevitably open up more. In the world of big data, we also need to find useful data to inform precision management, both in terms of profitability but also environmental sustainability.

A key source of useful information is yield monitor data, and the wider the coverage over different crops, regions of the UK and seasons, the wider the applicability of any findings.