Last week, CF Industries announced the immediate closure of both their UK production sites. This caused wide ranging concerns about the supply of fertiliser and CO2 to the UK food supply chain. Following this, talks with the UK government have resulted in the partial re-opening of CF’s UK operations. This intervention only provides a 3-week support package for their Billingham site though. It is hoped during this time enough revenue from CO2 will be raised to cover increasing costs of natural gas. Natural gas is the feedstock for ammonium nitrate (AN) production.

CF Industries produces c.40% of UK AN supply. However, this is from two fully operational sites. With only one site set to reopen, and the restart likely to take a few days, the UK may still see some tightness in AN availability. An announcement also came from Yara that they are curtailing their European AN production by 40%. Together this could result in further support to AN prices.

AN prices are at, or near, record price levels. In July, UK produced AN was quoted at £326/t. Since then, reports suggest a further increase, with October/November prices quoted at £475-£480/t. At the same time though, new-crop UK feed wheat futures (Nov-22) are at their highest levels for this point in the contract for at least 10 seasons. 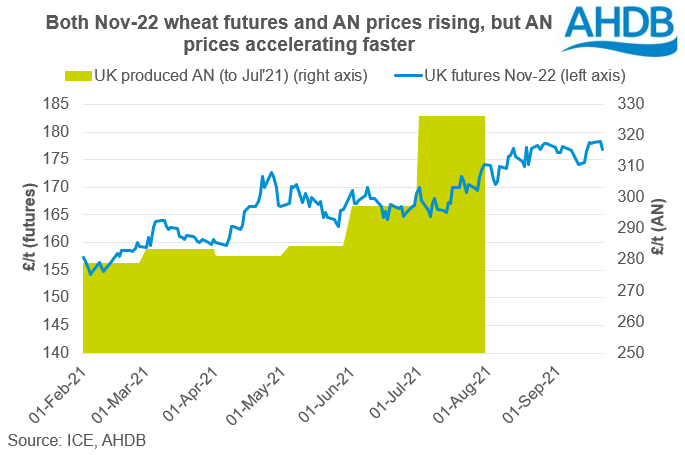 That said, the UK looks set to remain a net importer of wheat for the 21/22 season. As such, import parity will need to be retained and any price ceiling governed by the global market. Currently the global outlook is bearish on the back of tight supplies. But there is still plenty of planting and growing months left before actual supply for 2022/23 is realised.

So, it remains imperative to understand and control cost of production and adjust accordingly should input costs rise further. Adjustments could also be made if output prices come under pressure. Latest AHDB Farmbench data shows inorganic fertiliser costs make up over a third of the cost of production for wheat, barley and OSR.

AHDB’s Nutrient Management Guide (RB209) can help farmers adjust nitrogen fertiliser recommendations in response to the markets. The recommended rates within the guide are based on the economic optimum, which can change based on the cost of fertiliser and/or the price expected for the crop. To help farmers there are two tools included within the guide for cereals and oilseed rape, which show a farmer how to optimise a crop’s recommended application rate of nitrogen.

Alternative methods for N fixing are a longer-term solution. However, they are ones that should be considered to improve longer-term sustainability. At the same time, they could reduce the industries carbon footprint and hedge against volatility of inputs markets. AHDB resources to help guide usage include our Farmbench tool and the AHDB Nutrient Management (RB209) guide.