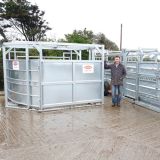 Brean farmer Richard Bigwood and his family have certainly experienced their fair share of life’s ‘ups and downs’, being coastal farmers on the Somerset Levels. As Britain’s weather pattern changes and holiday growth in the South West increases, the family have to be proactive in securing future success. As tenant farmers at Brean Farm for eighteen years, Richard and his wife Karen realised the quiet life of an established family farm was unlikely. Originally the family took on a 200 acre arable tenancy. Now the farm’s average has expanded to 500 acres, is increasingly sown to grass leys and incorporates two caravan storage and three permanent caravan parks.

The ground suffers heavily from being at sea level and whilst extensive drainage would be beneficial to the soil structure, Richard has chosen to switch crops to a five year grass ley system whilst building a pedigree suckler herd and fattening on 170+ calves. Four years ago son Henry, who had built up an extensive local plumbing business decided that he would like to retain an interest in the family farm, so took on the responsibility of building and managing the beef enterprise. Hereford x Fresians x Limousin calves out of British Fresians have been the mainstay, but as “experience and results” grew, a pedigree Simental bull has been added to ensure the farm’s continuity in rearing quality calves for the beef market. With the local summer population of Brean increasing by 50,000 seaside tourists, Henry has built up a local following for his meat which is sold in a nearby bar/restaurant.

It is this summer demand that provides the opportunity for business expansion. The caravan business requires Richard and Karen’s constant attention from March through to November and with only one regular farm employee, as Henry still operates his plumbing business, all the duties of stock handling have to be easy, simple and safe! Richard and Karen are both keen to emphasise the “safe” element as being of prime importance to the family as all areas of the business would come to a quick halt should any member of the team be injured or ill. A nasty scare in 2014 when Richard and Henry were handling skittish mature animals ready for market exemplified this point, and they sought a new line of cattle handling products that would keep them all safe.

Brean Farm now utilises a new Ritchie Mobile Cattle Crush and Stock Cube after comprehensive research into farm-safe cattle handling products. With these two mobile additions, the 22-24 month old stock, as well as young calves, are handled out on the Levels in summer and through the buildings in winter. Set-up time is minimal as the Stock Cube is self-contained and is easily carried on a front-end loader with the mobile crush towed behind to any site on the farm.

The Ritchie Stock Cube unfolds to form a multi-pen safe handling system, where a single operator is always behind and separated from forward moving stock. Monthly cattle weighing and health checks have become noticeably quieter as the cattle adapt to the regular, no aggravation, handling experience within the cube.

The Mobile Cattle Crush’s fully sheeted sides, automatic head yoke and two sliding gates are items that make the unit perfect for its job. Side gates on either side open to provide access to stock of all ages and sizes, be it calves for tagging or castrating, or cows held for A.I. A head yoke is an added bonus, keeping animals steady.

With stock numbers increasing and cattle sizes growing with the imminent inclusion of their own Simental cross cattle, Richard and family are confident that the beefy Ritchie equipment satisfies the safe and easy running of the farm, now, and in the future.​
You can read this update from Ritchie Agriculture on TFF's AGVendor...
Click to expand...