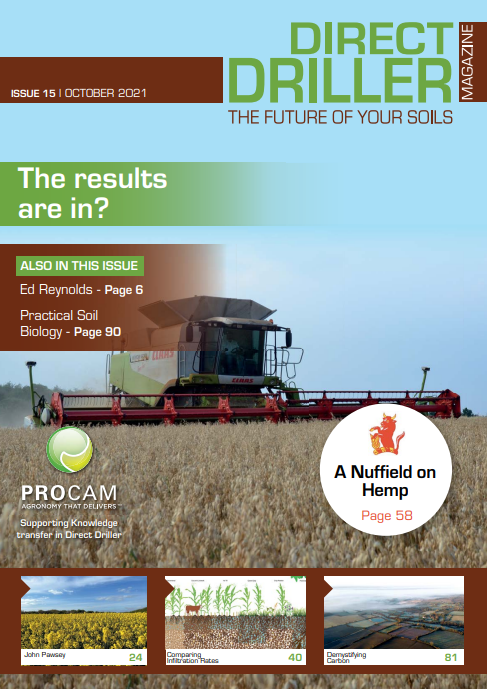 With the following articles:

THE REAL MEANING OF KNOWLEDGE TRANSFER

If this issue of Direct Drilling says anything, it is that farmers are not afraid of change. Every one of the farmer focus articles describes how the contributor has made changes to many of the inputs under their control. It provides a vast amount of highly relevant and valuable information for all involved in arable farming, and in particular direct drilling. One gem that came from Clive Bailye is the observation that the drought resistance of cereal rye is far better than winter wheat. (pg 30) Arable farmers need to make time to read these and the other technical articles in their free paper copies (www.directdriller.com) or from the on-line issues. This is information which is shown to make a real difference in outcome, to both soil health and financial performance. These experiments done by those who are curious as to what happens when things get altered are a huge contrast to the ‘we do it this way’ approach. The dictats of the War Ag conditioned farmers to do what they were told by advisors who came from institutions and, in the last few decades, increasingly from commercial suppliers. There was little appetite to argue and do it different. Brexit, which has coincided with the explosion of communication methods, has opened the door for wider research. Change in UK farming includes post Brexit farm payments. The end of the greening rules has been welcomed, and these are the first of huge changes to Defra and Rural Payments. The Sustainable Farming Incentive pilot scheme (www.gov.uk/guidance/sustainable-farming-incentive-pilot), required those interested to provide an ‘expression of interest’ in the window Mon 15 March to Sunday 11 April. Some 2,000 were accepted and have needed to complete their application by the end of Sept to start their pilot scheme in October. So far there has been muted response, perhaps partly the result of it being bang in the middle of harvest. Pilot participants get £5,000. The scheme will support approaches to farming that deliver for the environment such as soil health, IPM, and hedgerows. It looks as if it is a case of early birds catching worms. The Defra changes will in time involve dispensing a large budget, and knowledge of how it works and the application procedures are the next hurdle for farmers to clear.
Reactions: sanderhi and Clive