The first and only UK recommended Clearfield OSR

The first and only UK recommended Clearfield OSR 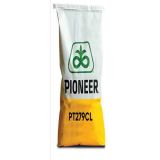 The UK’s oilseed rape growers have been through a number of significant challenges in recent seasons.

Weather, pest and weed pressure have all played their part in frustrating farmers’ ability to grow consistent, profitable crops.

But the importance of oilseed rape to the rotation – coupled with the unrivalled gross margins in comparison to other break crops – means many growers are reluctant to turn their backs on it.

Fortunately, developments in breeding by bringing Clearfield varieties onto the market has delivered hope for growers plagued by brassica weed issues, that have traditionally deterred them from growing the break crop.

PT279CL from Pioneer is a non-dwarf, double low variety and is the only Clearfield hybrid on this year’s AHDB Recommended List.

With a UK listing, PT279CL is the highest-yielding Clearfield variety ever to achieve either official registration in the UK or to be tested by the AHDB.

It scores 6 for light leaf spot and 5 for stem canker with an oil content of 45%.

Pioneer’s seeds and inoculants manager Andy Stainthorpe said: “To get on the list it has effectively beaten every other Clearfield hybrid that has ever gone through UK registration or AHDB testing.

“It has competed against all-comers and won on yield hands down to be the most proven Clearfield hybrid that the farmer can grow.”