Wild-oats, of which there are two wild species, are one of the most competitive grass weeds (more than twice as severe as black-grass), with just one plant per square metre able to reduce cereal yields by as much as 1%.

As with any weed, prevention of seed production should always be a priority: reducing infestations by rogueing is therefore strongly advised, especially as the typical array of cultural controls which are commonly used to control weeds such as black-grass (later autumn drilling, spring cropping, ploughing, etc.) are often less effective against wild oats due to the plant’s protracted emergence and the ability of the plant’s large seeds to germinate from depths of up to 15cm.

Measures to be considered​

The following measures should therefore be considered:

Wild-oats from 1 leaf unfolded up to flag leaf ligule visible.

0.25 L/ha
0.125 L/ha plus adjuvant (methylated seed oil)
Optimum weed control is best achieved when all the wild-oats have emerged and are actively growing in good conditions. 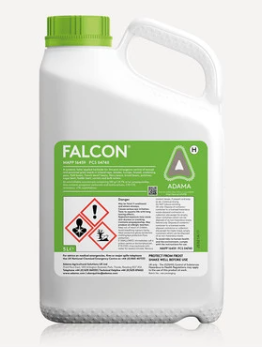 A foliar acting selective herbicide with systemic activity on a wide range of grass weeds and volunteer cereals. For use in potatoes, beet, oilseed rape and a wide range of broadleaved crops.

Wild oats from 2 leaves unfolded up to early tillering

Use the highest dose specified if weeds are beyond the optimum growth stage or under the following conditions: 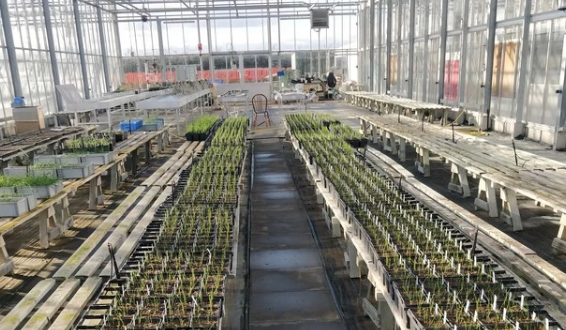 These products contain ACCase inhibitor active ingredients, also classified by the Herbicide Resistance Action Committee as ‘Group A’. Use only as part of a resistance management strategy that includes cultural methods of control and does not use ACCase inhibitors as the sole chemical method of grass weed control. Applying a second product containing an ACCase inhibitor to a crop will increase the risk of resistance development: only use a second ACCase inhibitor to control different weeds at a different timing. Strains of some annual grasses (e.g. wild-oats and Italian ryegrass) have developed resistance to herbicides which may lead to poor control. A strategy for preventing and managing such resistance should be adopted. If herbicide resistance is suspected, it is recommended that seed samples are sent for testing to fully characterise the susceptibility of the wild oat population in the field.

The efficacy of wild-oat herbicides is complicated by the vigorous spring growth rates of commercial crops which can produce a canopy which shields the emerging wild-oats from spray treatments. Competing spray requirements in the spring also puts additional pressure on spray workloads, with growers often opting to apply a lower water volume at a high forward speed in order to cover more ground within a specific window of opportunity.

In order to maximise the biological efficacy of products such as Topik (240 g/L clodinafop-propargyl and 60 g/L cloquintocet-mexyl), application accuracy is absolutely essential: whilst it is possible to reduce the water volume of early spring applications (before GS31 when weed targets are small and not protected by a crop canopy), later applications (at GS31-41 when the crop canopy is more developed) must be made with a higher volume of water. Forward operating speed (max. 12kph) and nozzle choice are also essential at this later timing.


At both timings, Topik will be most beneficial if applied during good growing conditions as this promotes movement of the active in the plant to the meristem where it has the most effect. In 2021, the cold and dry spring conditions had a negative impact on the efficacy of all ACCase herbicides even when applied at the optimum timing for wild-oat activity. In order to mitigate this effect, larger weeds should be targeted with a higher rate of Topik applied without an adjuvant (the lack of an adjuvant is less of a concern when Topik is applied in a mix with other products that contain surfactants and which will aid leaf wetting). 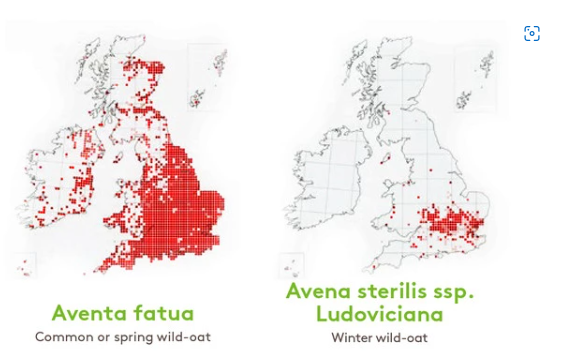 Why does identification of species matter?​

Seedling emergence patterns and winter hardiness differ between the two species, so correct identification can help in herbicide decision-making: as a general rule, Avena sterilis ssp. ludoviciana is considered the more challenging species to control thanks to its autumn germinating habit which means plants are bigger and more established than Aventa fatua when spring herbicides are applied.

There are two main species of wild oats which occur as weeds in UK arable crops, both of which may occur together or independently within a single field 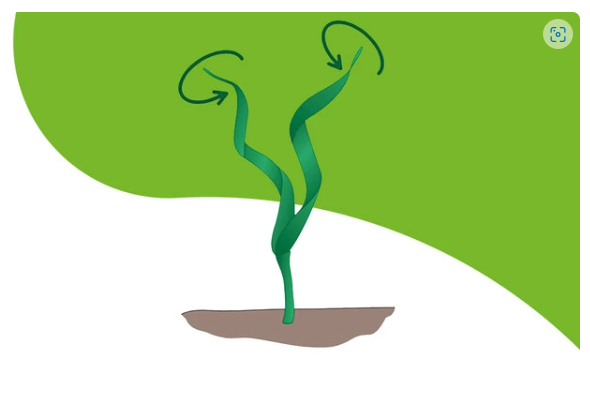 Wild oats can also be identified by their leaves which twist in opposite directions. 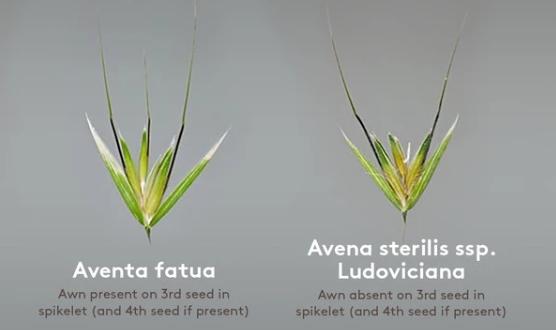 Identification after panicles have emerged​

Two features make it easy to identify the two species of wild-oats after their panicles have emerged:


1. The presence or absence of an awn on the third seed in a spikelet:​ 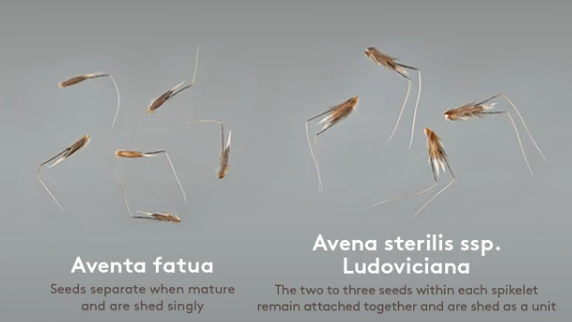 2. Whether seeds remain attached to each other or separate at shedding:​